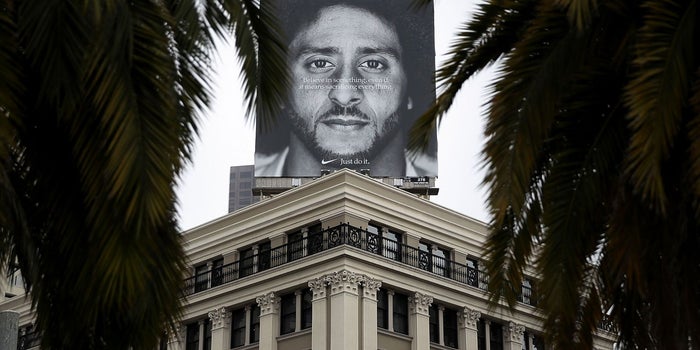 Controversy in marketing can be an effective way of getting noticed, which is why some brands purposely look for ways to create a splash.

They recognize that if you want to stand out, you can’t always play it safe. Offbeat, controversial and edgy campaigns create an experience that others will want to share. However, riding the wave of controversy isn’t without peril. You want to create the right kind of buzz — the kind that gets people excited about your brand. You have to know when it’s worth taking a risk and deeply understand what “clicks” with your audience. And, of course, timing is everything.

If you can nail it, a controversial campaign can propel your brand faster than nearly anything else. Want to know how? Delve into these 8 edgy and decidedly nontraditional campaigns to see how they broke the mold and found success.

There is no doubt that Nike’s ad featuring ex-NFL quarterback Colin Kaepernick as the center of their “Believe in Something” campaign was one of the most controversial ads in recent memory.

The ad thrust Nike into the firestorm of controversy that had already been smoldering around Kaepernick, who inspired a player protest movement by kneeling during the national anthem during games. It was a strategy that risked alienating countless consumers.

But whether you believe it was notable or in bad taste, what is clear is that the campaign proved to be incredibly successful, especially among Millennial and Gen Z consumers who want their brands to take a stand on social justice issues. The campaign, which was announced in a simple tweet by Kaepernick, generated at least $43 million in free advertising for Nike. Sales skyrocketed by 31 percent and its stock price hit an all-time high in the aftermath of the ad.

Who would have thought that a fast-food chain known for quick and tasty hamburgers would wade into a complicated topic like net neutrality? But that’s exactly what Burger King did, through a commercial based on the premise that customers would need to pay a premium in addition to the normal price for their food if they wanted to get their meals quickly. The spot featured Burger King employees explaining the new rules to angry and confused customers by calling it “Whopper Neutrality.”

The commercial not only deftly explained a complicated topic like net neutrality; it also helped people understand why repealing regulations surrounding net neutrality has such a negative impact on everyone. And it seems to have paid off.

Related: You Want Fries With That? Burger King Explains Net Neutrality In Less Than 3 Minutes.

In a unique and, some say, rather odd partnership, insanely popular global music star DJ Khaled became Weight Watchers’ official social media ambassador. This is a great example of how influencer campaigns can help brands recast their image and reach out to new audiences.

DJ Khaled has a huge audience that is young and social media savvy, and he is decidedly more edgy and irreverent than the spokespeople we’re used to seeing from Weight Watchers. This also means that DJ Khaled has the potential to connect with a whole new crop of clients and broaden the Weight Watchers audience base (think younger and male).

The strategy has worked so far: The company’s shares immediately rose by 6 percent. And fans can follow along on social media (Snapchat, Twitter, Instagram and Facebook) as DJ Khaled participates in the WW Freestyle program.

Gillette’s “We Believe: The Best Men Can Be” ad had nothing to do with shaving, beards or even personal grooming. Instead, it challenged stereotypes and “toxic masculinity.” So what happens when a well-establish shaving company wades into the fray of the #MeToo movement to promote a new kind of positive masculinity?

As you might imagine, it garnered both praise and scorn, but it also immediately went viral and now has more than 30 million views. While people either seemed to love it or hate it, overall it led to unprecedented levels of media coverage and customer engagement.

The data behind the ad showed that it had the effect of appealing to a wider market, including women. And it was effective at targeting Millennials, who tend to give more credit to brands that incorporate social responsibility as part of their overall image.

Related: How to Navigate the Murky Waters of Taking a Stand on Social Issues

The United States has long had conflicting opinions on immigration, but Anheuser-Busch’s ad “Born the Hard Way,” about their founder’s own immigrant roots, sought to remind people that America is built on those who come here with a dream of a better life.

The ad is also a reminder that even Budweiser, an all-American beer company, has immigrant roots. On its own, the message isn’t particularly polarizing. But the timing of the ad, a Super Bowl commercial running on the heels of widespread protests over a federal immigration ban, resulted in a backlash from some loyal customers, while others saw it as the embodiment of the American spirit.

Budweiser immediately shied away from any political comparisons, saying they were just trying to highlight the ambition of their founder. But the overall result was that the commercial became one of the most-watched Super Bowl ads, with more than 21.7 million views online in only three days. And data show that it was well received overall. So, whether they meant to create a controversial ad or not, it still played to their favor.

Prompted by the Syrian refugee crisis, Airbnb formulated a campaign based on taking a stand and sending a message of acceptance. The commercial shows a montage of faces of different nationalities blending into one another, with text that reads, “We believe no matter who you are, where you’re from, who you love or who you worship, we all belong. The world is more beautiful the more you accept.” The ad highlighted Airbnb’s commitment to provide short-term housing for people in need, including refugees, victims of natural disasters and aid workers.

The ad received its fair share of hate on social media. However, the response was widely positive. The ad generated 33,000 tweets during the first half of the Super Bowl, more than any other advertiser, and the majority were overwhelmingly positive. According to Airbnb’s internal track, reactions to the campaign were 85 percent positive. And Airbnb’s call to the public to open their homes to displaced populations resulted in 15,400 volunteer host signups to date.

7. Equinox’s “Commit to Something.”

US-based gym and lifestyle brand Equinox urged people to “’Commit to Something” in an ad series that confronted cultural issues and encouraged people to change their lifestyle. The campaign suggested timely topics likely to stimulate cultural conversation. For example, one picture features a model breastfeeding two babies in public while dining at an upscale restaurant.

Another features a young woman vehemently protesting and standing up for her cause; and another is of a man who leans back on his couch, his abs glistening as he unapologetically bathes in his own money. The campaign is sexy, edgy and polarizing, but definitely eye-catching and thought-provoking.

While some may have found the campaign distasteful, it certainly achieved its real purpose, which was to increase media attention and sales. Equinox achieved over 735 million earned media impressions, the equivalent of a $70 million spend. And the company saw an 81 percent increase in sales leads.

When it comes to products that aren’t fun to market, odor-eliminating bathroom sprays are right up there. So how do you effectively market a toilet fragrance spray without resorting to cliché images of rose petals or crisp mountain scenery?

By not being afraid to cut the crap and take on a taboo subject. That’s exactly what Poo-Pourri did with its marketing campaign entitled “Girls Don’t Poop,” which featured a stylish woman sitting on a toilet discussing dropping the “motherload” at work and other challenges of using the bathroom.

The marketing campaign aimed to put it all out there and not hold anything back, and by doing so, it managed to be both humorous and relatable. It’s been viewed more than 40 million times on YouTube and led to massive exposure, opening the way for additional successful marketing campaigns from the brand.

Related:
8 Controversial Marketing Campaigns That Paid Off
How Brands Can Use Affiliate Marketing to Increase Their Marketing ROI
An Advertising Agency Has a Great Way to Diversify Its Income: Launch Products Pitched by Its Employees