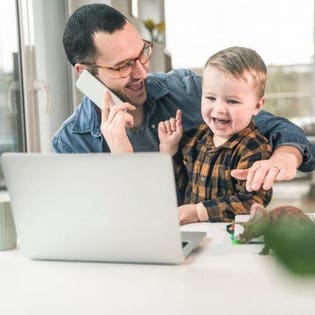 My wife wants our two-year-old daughter to grow up following her dreams and pursuing whatever career makes her happy. While I, of course, agree with that perspective, I can’t help but see her as an itty-bitty entrepreneur.

I recognize that this sounds odd. Most reasonable people would probably ask what my daughter Samantha, who’s not fully potty trained yet and occasionally wears pants on her head, could have in common with an entrepreneur. The answer: a lot. Most entrepreneurs could learn from how she and other toddlers tackle their own entrepreneurial project — which is growing up.

I believe toddlers should have their own guide to entrepreneurship. However, since they can’t write, I wrote one for them. After evaluating Samantha’s entrepreneurial approach to life, I’ve come to the conclusion that there are at least four key areas where toddlers are role models for entrepreneurs.

1. Be ready to iterate fast.

After a startup raises seed funding, it usually has somewhere in the range of 18 months to prove that it’s ready for capital to scale. During those 18 months the most important thing that a company can do is to learn very quickly and iterate until they get their model and tech right.

When I think about what my daughter Samantha was like 18 months ago, she was a totally different person. She could barely walk and had a vocabulary of perhaps 75 words. Fast forward to today and she’s moved like lightning up the learning curve of life. Now when she is in motion, it’s usually in the form of a sprint — and she doesn’t stop talking.

Startups (like kids) almost always get something wrong on their first try. Successful startups are able to iterate fast enough to figure it out before they run out of runway. The key is speed.

Entrepreneurs can take a clue not only from the speed at which toddlers learn but also how they learn. I once heard a statistic that toddlers fall 80 times a day. I don’t know if that’s correct, but it sounds right to me. And little kids often will do things that are more painful than falling. I once saw my daughter run full speed directly into a wall and bounce off. She began to cry for a moment, shook it off and kept going. After that she ran into lots of other things but no more walls. And that’s part of the secret sauce of entrepreneurship.

You’re going to try many things that don’t work. Too often, we don’t learn from these mistakes because it’s painful to admit that we made a mistake in the first place or we give in and wallow in frustration because of all of the mistakes we made. But the best thing to do is what a toddler does: Acknowledge the pain for a moment, shake it off and make new mistakes — but not the same ones.

The same is true of the best entrepreneurs. They know things can go wrong and indeed recognize many things will go wrong because they’ve faced innumerable mistakes, challenges and minor failures along the way. Yet they don’t fear taking calculated risks because they know that great companies are built on the backs of bold steps and nonstop experimentation.

My daughter is a party in a box. She will sit in her crib for half an hour having a nonstop conversation with her stuffed octopus and her dog. You don’t need to buy nice toys for a toddler. Samantha is as likely to want to play with the box and the wrapping as she is to enjoy the toy I spent hours finding for her. And that’s the point: Toddlers use what they have at hand and make the best of it.

Entrepreneurs, when they’re getting started, must do the same. Too often, I hear from an entrepreneur that he doesn’t know how much it costs to acquire a customer because he’s waiting to hire a VP of marketing or to raise some capital before figuring it out. That’s the wrong answer.

If you are running a business where you’ll acquire customers through online advertising, you need to find a way to scrape together $500-$1,000 to put together some basic landing pages and get a ballpark sense of how much it’s going to cost to acquire a customer. When you are an entrepreneur, you have to use the resources at hand and be exceptionally resourceful because you’ll never have all the resources you want.

While execution is hard, many of the principles underlying entrepreneurship are simple — so simple that a toddler can master them. My final takeaway? If you’re an entrepreneur and need a side hustle, you should consider babysitting, probably for a venture capitalist.