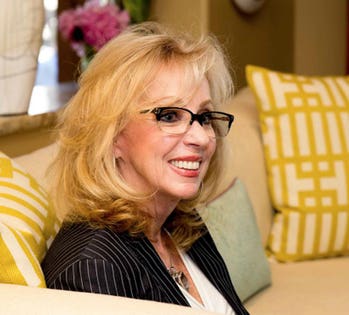 Jan Jones Blackhurst may be best known today as the voice of diversity and inclusion at Caesars Entertainment, the international hospitality and gaming operation with 65,000 employees worldwide and annual revenues of nearly $9 billion [NASDAQ: CZR].  But here in Blackhurst’s hometown of Las Vegas, she’s long been a face of entrepreneurship and progressive business, first as the voice of her family’s car dealership, on whose behalf she was heard, “incessantly,” as she put its it, in their multi-year advertising campaigns across the city’s television and radio waves.

Soon, she rose to even greater visibility when she managed to win election as the first female mayor of Las Vegas, a campaign she got herself into, she tells me, “on a dare.” By doing so, Blackhurst broke through the glass governance ceiling in what, at that time, was perhaps the most misogynistic city in America. Her election that first time shocked everyone (“maybe most of all myself”), but after that first term, her re-election–with an overwhelming 72 percent of the vote–surprised far fewer.

Working for the “most disenfranchised populations in our city”

In her years as mayor, Blackhurst promoted and presided over the largest spurt of development the city had seen in decades. However, she says,  “I never thought of commercial development as a sufficient achievement by itself,” unless it could be aligned with finding a place at the table for the most disenfranchised populations in her city.

These efforts included assistance to the homeless community, on whose behalf Blackhurst created a housing and outreach plan that has since been used as a model by cities across the U.S., and support for those who were then called “G&L [Gay and Lesbian] Citizens.” (“B, T, and Q were added later, each additional letter drawing more controversy than you can imagine, today, could ever have been warranted,” she says.) Blackhurst was the first mayor to serve as Grand Marshal for the Gay Pride Parade and walk in the AIDs walk–this was in contrast to prior mayors, who had refused to participate, out of fear of  negative headlines in the local press, and she was the first mayor to address and work with the Lambda Business Association, the most important gay and lesbian business organization of its time.

Jan Jones Blackhurst at the Neon Museum in Las Vegas

It’s this second column, humanistic accomplishments, for which Blackhurst continues to be known today, via her work at Caesars Entertainment, where she’s currently Executive Vice President, Public Policy and Corporate Responsibility.  At Caesars, she advanced the industry’s first Responsible Gaming program (such programs are now de rigueur industrywide), the first Code of Commitment, which signals Caesars’ adherence to integrity standards, and the “ambassador” model for interacting with troubled gamblers (more on this below). On Blackhurst’s watch, employee diversity has risen to the point that 41 percent of management positions are held by women and 57 percent of employees come from diverse backgrounds. She has also launched an initiative to move 50 percent of women into senior management positions across the organization by 2025.

Furthermore, under Blackhurst’s guidance, Caesars has earned a 100 percent (“perfect”) score in the Human Rights Campaign (HRC, a driving force in LGBTQ human rights) for twelve consecutive years. (The company’s latest advancement in this area has been to offer full, marital-equivalent benefits to same-sex nonmarital partners .)

Blackhurst is an advocate of what she calls “deep hospitality,” an all-encompassing concept that she contrasts with “the more basic, but also-essential, ‘bread and butter hospitality.’”

Bread and butter hospitality, she explains, “is the kind so many of us in this industry already practice. It’s a solid, practical way to go about business that grows and sustains loyalty among your customers, based on the traditional guest/host relationship.

“But there’s more value to be found in the hospitality concept, if you take it beyond this bread and butter level. What I call ‘deep hospitality’ is all about how you see people: Do you see someone as part of a ‘homeless mass’ or as an individual who needs a home, help, opportunity? Do you see an older person as a burden or as a potential team member? [A significant percentage of Caesars’ call center staff is made up of retirees–if that’s the right word–aged 65 and older.] Deep hospitality is a way to make more than surface improvements in how you care for people across your business: in your HR and talent management practices, your treatment of all guests, and your care for the communities in which you operate.”

One of Blackhurst’s most visible moves toward following her ‘deep hospitality’ principles came when she created Caesars’ Ambassador program for promoting responsible gaming.

“The vast majority of gamers can gamble to a budget,” she tells me.  But for those who can’t, Caesars has trained and deployed 860 “ambassadors” who personally reach out to gamers who are demonstrating specific distress behaviors. Then, with either the gamer’s agreement or via a unilateral decision by the house, Caesars provides intervention and help to remove them from the casino, a ban that is then in place for life. (Here was the detail that really impressed me: If they nonetheless find a way to slip into a casino and are only belatedly identified, “we stop them where we find them and donate their winnings at that time.”)

Blackhurst was also quick to paint me a less-well-known scenario than the Ambassador program, which is by now considered a model across the industry.  This next scenario is where Caesars is similarly practicing deep hospitality by assisting endangered sex workers who are drawn to resort areas worldwide.

Any hour of night or day, but mostly in the wee hours of the night, “young women, scantily dressed–regardless of the weather–and looking like they’re desperately in need of a square meal” will come to casinos and hotels around the globe.” If it’s a Caesars property, these women no longer receive old-school treatment via a security guard who’s primed to toss her directly out, no matter how chill the night. Rather, she’ll quickly encounter a member of staff, security or otherwise, who is trained in “a whole new way of  seeing,” says Jones, and who will typically offer robes and blankets before escorting her back to her car. “There, she’ll be provided with resources that will help if she’s ready to make even a tentative step to escape from the terrifying world of human trafficking.”

When it comes to customers, employees, and other constituencies, Blackhurst says, deep hospitality “is all about creating an inclusive customer experience”: ensuring that the experience you provide is comfortable for diverse guests and employees and that the service delivery you provide is equitable for all. This is a goal, she says, “that all of us who serve customers need to work, relentlessly, to bring about.”

The first step in creating such an experience “is to ensure you are inclusive in your employee selection process, right down to the words you use to describe the position for which you are hiring.”  (Blackhurst points to studies showing that if you change the way you write a job description to make it more inclusive–for example using female pronouns or non-gendered descriptions–it increases the number of applicants overall–not just from the formerly overlooked constituencies.) The next step, she says, is to ensure that the screening and interviewing processes are as demographically blind as possible, and to work similarly on diversifying advancement opportunities as well.

Similar steps can be taken with customer offers, including changing the way you describe your product or service offering to be more inclusive in such areas as gender, race, ethnicity, sexual orientation, physical and non-physical disability, age, religion, socio-economic factors, and more. Beyond this, it’s essential that your customers are greeted and served by employees who really walk the walk once the newly courted guests arrive. For example, it’s a great potential breakthrough when your recently enlightened marketing department runs a promotion to get more same-sex couples to come to a hotel. But the ultimate success of the scenario is going to depend on what happens after these couples arrive, starting from the welcome they receive from the front desk staff.  “Until team members’ reactions to, say, a non-traditional family with two moms is on a par with their reaction to a heterosexual couple, it’s essential to keep trying.  And then try some more.”

Promoting deep hospitality, she says, doesn’t run at cross purposes with supporting an organization’s bottom line.  To the contrary, “I am a businesswoman, first and foremost. And everything I know, and everything I’ve studied, shows that inclusivity in all areas of an operation powers the bottom line. More inclusive HR and talent management, more inclusive guest practices and policies, and, of course more diverse representation in management, all help the bottom line–improving, according to multiple studies, metrics ranging from hiring pool to EBITDA to return on sales. Of course, your core service or product offering has to be solid.  But in a business such as ours, where it’s all about the human element, deep hospitality really, truly helps.”