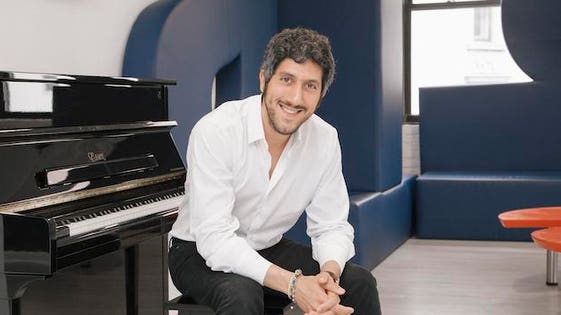 Serebral360° found a great read by Forbes – Entrepreneurs article, “Adam Singolda Builds Taboola To Be Discovery Engine For Everything.”

On the occasion of the 2019 Cannes Creativity Festival, I spoke with Adam Singolda, Founder and CEO of Taboola.

Bruce Rogers: Tell us how Taboola came about?

Adam Singolda: Founding Taboola was my first job. Before Taboola, I was in the Israeli army. In Israel, it’s mandatory three-year service, but I was accepted to this special place. The closest would be NSA in America. So, I was in the protecting side of encryption, and our job was to make sure that information stays within the various functions in the country.

It was a phenomenal experience. I signed very early on that I would stay longer, so I stayed almost seven years. I was an officer. I came back as a team leader, and then manager of managers. This was my first managerial experience. From a technology perspective, the army is amazing, because you get to do very cutting-edge stuff, and you’re very young, and you get responsibility that in the real world you have to be 40.

So it’s a very special journey, but maybe the most special piece of it is social, because it’s so different than the real world in the sense that everybody looks the same. They wore green. It’s very flat for the most part. You have to make it work with whatever you have.

I was working with the smartest people I ever met in my life, way smarter than me, and together build this culture that would allow us to do what we needed to do.

When I left the army, I was 25 and still living in my parents’ house just doing nothing. And I was trying to watch TV but couldn’t find anything to watch. And I found that so stupid. Why am I supposed to be looking for things? Things should be looking for me. Like, the TV shows should be finding me.

Google is great when you know what you want. But what happens when you have no idea what you’re supposed to be looking for?  I thought that there’s a huge opportunity to build a search engine in reverse.

All people need angels and luck and mentors. I found mine at a Bat Mitsvah for the daughter of a friend of my Mom’s. He was my angel then; he’s still my angel now. We’re very good friends. He gave me $180,000 to help me turn my idea into a business.

And that’s how Taboola started.

Singolda:  The first couple of employees were my buddies from the army in applied mathematics and computer science. Buy it was a very bad beginning in the sense that from 2007 when I started to end of 2011, we had no revenue. And I moved to New York in 2009. We were about eight people during the first four years. And about three times during that period, I had a plan to shut down the company because I had no more money. And every time I got lucky. The first time around, my CPO said, “I’ll give you some money, I believe in what we’re doing.”

Three times I faced going out of business. Our first product was a video recommendation service, like from TV. That’s how it started.

We had an amazing technology and no revenue. And I tried to sell it in any way possible, but nobody understood the concept of recommendation engines. And 2012 was the beginning of us growing. We expanded from video recommendation to article recommendation. And we started growing from nothing to $100,000 in revenue in January 2012,

Sometimes doing something for the first time and being inexperienced protects you because you constantly push yourself, not even knowing how big is big. I think an experienced person would probably say, “This is a shitty business. You can’t make good money out of this. Stop doing it.”

Rogers: How far has the business grown since those days?

Rogers: Is culture the thing that allows you to scale? How would you describe Taboola’s culture?

Singolda:  I think there’s a lot of clichés in that space. I think the bigger question you have to ask yourself as a CEO is what decisions am I making that are counter-intuitive that will truly create this culture that you’re inspired by or what you want to create.

Our culture is very transparent. We have 1,300 employees now. And we’re aggressively sharing almost everything we can share internally so that people working at Taboola don’t feel like employees. They feel like they’re partners on that journey.

We share our financial data daily. We then do a weekly toast. It’s toast with coffee where we talk about successes and loses. We launched Taboola University. So, every month, because we hire so many people, all the new people that join the company go through a week university. And it can be VP, office manager, and whatever.

So, by the time you have your first day of work, you don’t really have a first day at work. ask, “When do you go public? Do you buy this company? We’ve heard rumors that this, this, and that.” And I never skip a question.

I think it’s so important to not make anyone feel distant from the business. I would argue that an office manager at Taboola knows more about the financials of our company than some executives in other companies.

Rogers: Doesn’t that come with risk?

Singolda: I trade the risk of you doing something bad to me with the idea that we are together on the same boat. I start by trusting you.

Rogers: And is that your experience in the Israeli army? Where does this perspective comes from?

Singolda: I have a lot of passion for what I do and the people I do it with. You know, my dad is a musician. I grew up in a house of music. My dad is a famous guitarist. And so, all I saw was just music and passion growing up. And passion is something that I think is a big part of any company’s culture, if you have it or not. So, I think, you know, when I look at the people who work with me, my CTO who’s with me for over 10 years now, my CEO and president, seven, my SVP of Engineering, 11.

We’re very flat, we’re very transparent. I bring some of it, and the team brings the rest. Big decisions are made through conversation, not by rank. We debate a lot, and we push each other a lot. And you get to use your rank if you want to, but you should use it rarely, and when you use it, you better be right. Because if you’re more wrong than right, you’re going to lose people’s trust.

Rogers: What does the future look like for Taboola?

Singolda: My hope is to really take this vision of building a discovery engine and be anywhere humanity is interacting with things to make people’s lives better by introducing them to something new they may like but they never knew existed. Discovery is everything. I feel like right now we spent a decade building a recommendation engine that is used by one and a half billion people. Last year, people clicked on Taboola more than 20 billion times. And we’re now able to truly help our partners’ journalism thrive by engaging consumers and sharing a lot of the revenue we make back with them.

We paid publishers last year shy of $1billion. We’re paying the most important media companies to keep journalism alive. So, I’m very proud of that.

I’m just starting. I’m small. I’m only a billion plus revenue company that’s profitable. You know, we raised $160 million and most of it is in the bank, so we’ve barely touched anything we’ve ever raised. And we’re excited about making a dent in this completely new world of interconnected devices. So, it’s a whole new side to the world that we’re excited to get going.