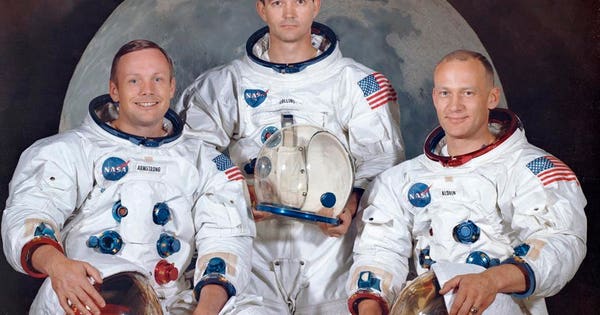 Serebral360° found a great read by Forbes – Entrepreneurs article, “Apollo 11 At 50: How I Wrote A Joke For Astronaut Buzz Aldrin.”

The crew of the Apollo 11, from left, Neil Armstrong, commander; Michael Collins, module pilot; Edwin E. “Buzz” Aldrin, lunar module pilot. Apollo 11 was the first manned mission to the surface of the moon. (NASA via AP)

I’ve had the opportunity to work with many great talents over the course of my career, including Ted Turner, Steve Ballmer, Bill Nye, Ed Helms and hundreds of other less famous, but no less talented, clients and colleagues. But one encounter stands head and shoulders above the rest: the time I got to write a joke for Buzz Aldrin.

My company, Filmateria Studios, had been hired to produce an event for a Microsoft division at a major international show that the company hosted in New Orleans. Preparations took months, as each division worked on its messaging for the coming year, crafting the perfect pitch to motivate staff, contractors and vendors to achieve the lofty goals that company leaders set for each division. Like most major tech companies, Microsoft was ambitious and meticulous. Each creative agency was expected to top anything that had gone before by a wide margin.

This year, our client had chosen the theme of “reaching for the stars,” which could be a great opportunity to create some cool PowerPoint background graphics and a captivating video or two. At the end of the first brainstorming meeting, I casually tossed out how much the Apollo 11 mission meant to me as a kid. The head of the division agreed profusely. “You know what would be fun….” he said “to get Buzz Aldrin to speak to our group.” I nodded, as you do when your client pitches an outlandish idea. “And it would be even better if I could come up with some way to introduce him to our team onstage….”

I jokingly said he should come out of a lunar module and Buzz should greet him onstage with some kind of pithy comment.

These are the moments you love and hate in the creative business. On the one hand, we had the opportunity to do the impossible. On the other, we had better do it right, or else.

The next few months of my life were a blur, as I reached out to Buzz Aldrin’s speaking agency, negotiated a deal, and worked with a high-end Hollywood prop shop to build a replica lunar module that could actually descend from the ceiling. We didn’t need to put our client in the module itself. He could sneak in from behind and appear to be coming out of the ship as Buzz greeted him onstage.

In retrospect, it was lunacy (etymologists, have at it!). But it was also insanely great. The module was built and it looked like the real thing. The client descended from the rig perfectly. And Buzz greeted him with my joke: “Finally, I get to be the first on the surface.” The joke was a hit, inciting big laughs and an ovation.

I got to know Buzz Aldrin a little during the several days we worked together. He was gracious, funny, and kind. He worked with me on the crafting of the joke to make sure it was in his voice so he would deliver it just right. He signed hundreds of photos and swag, and told great stories about NASA and other companies he had worked with.

But the greatest moment of all was when he walked out onstage for the first time, to an audience of 5,000 engineers from all over the world, who immediately recognized him and gave him a five minute standing ovation. In my years of working with notable public figures, I have never seen anyone even come close to receiving the adulation of the second man to walk on the moon.

To have to opportunity to work with him, even better, to write a joke for him, was the highlight of my professional life. On this 50th anniversary of his greatest achievement, Buzz Aldrin will always be the first on the surface for me.