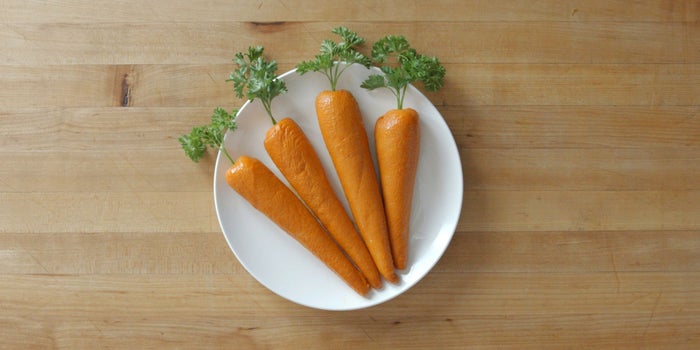 Serebral360° found a great read by Entrepreneur article, “Arby’s Is Unknowingly Trolling Many of its Own Customers With Its ‘Carrot’ Made of Meat.”

Arby’s recently announced the first of its line of "Megetables": The "Marrot" — a turkey breast in the shape and color of a carrot. In a press release by its parent company Inspire Brands, Arby’s chief marketing officer, Jim Taylor, explained the rationale behind the bizarre move: “Plant-based meats are the latest incarnation of making vegetables look like what Americans really want, which is great, tasty meat. … So we said if others can make meat out of vegetables, why can’t we make vegetables out of meat?”

While such a sentiment may sound inspiring to some of its die-hard carnivorous fans, the introduction of Arby’s meat-based plant is really a tongue-and-cheek way of responding to Burger King, Carl’s Jr. and the dozen or so other fast food rivals that are adding the likes of the Impossible Burger and Beyond Burger to their menus: “So, in true Arby’s fashion, while others are following the latest trend and exploring plant-based meat alternatives, the brand is staying true to itself by continuing to serve what it does best: 100 percent real meats," Taylor added.

It’s not that surprising that Arby’s is reacting this way. The chain that sells “The Meat Mountain Sandwich” on its secret menu has a history of trolling vegans and vegetarians. On Leap Day in 2016, it offered vegetarian menu options that basically consisted of their usual sandwiches at full price without any meat. And in 2015, Arby’s created a “Vegetarian Support Hotline” at the number 1-855-MEAT-HLP for those who “are on the fringe or new to the game” and may be tempted by its Brown Sugar Bacon.

But by flipping the plant-based meat trend on its head, Arby’s is inadvertently taking a dig at its own customer base. While many vegans and vegetarians are eating the latest plant-based alternatives, the overwhelming popularity of them is due primarily to another category: flexitarians — those who are interested in cutting back on their consumption of animal products but still eat some amount of meat. According to Mintel, nearly 60 percent of U.S. consumers fit this description. Perhaps then it is no surprise that Ethan Brown, founder and CEO of Beyond Meat, has determined that about 70 percent of the company’s customers eat meat in their diet as well as non-meat protein.

This trend is why even producers and distributors of conventional meat are jumping on the plant-forward bandwagon. Earlier this month, the poultry giant Perdue, in partnership with The Better Meat Co., announced plans to "help flexitarian families who are hungry for new ways to fill the vegetable void without sacrificing flavor or nutrition” by releasing frozen chicken nuggets, tenders and patties onto the market that blend in cauliflower, chickpeas and plant protein. Tyson Foods, the largest meat producer in the U.S., followed suit by launching its own alternative protein brand, including a vegetarian chicken nugget and a “blended burger” that combines beef with peas. And just this week, KFC announced the return of the vegan "Imposter Burger," which initially sold out in just three days during its trial run.

The reality is that Arby’s may “have the meats,” as its slogan suggests, but it — like these other restaurants and brands — also has many flexitarians as patrons. Arby’s executives may be laughing at their marketing team’s latest publicity stunt, but with the plant-based meat market projected to be worth $27.9 billion by 2025 — the joke is entirely on them.

Related:
Arby’s Is Unknowingly Trolling Many of its Own Customers With Its ‘Carrot’ Made of Meat
Arby’s Flips the Vegan ‘Meat’ Trend on Its Head With the ‘Megetable,’ a Carrot Made Out of Turkey
Sonic Sold to Arby’s and Buffalo Wild Wings for $2.3 Billion