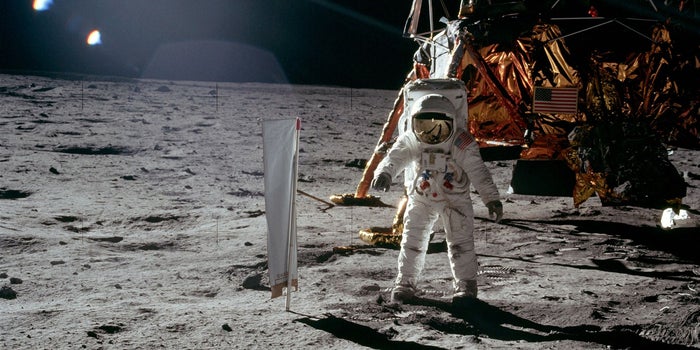 “Attempting the Impossible? Take These 3 Lessons From the Apollo Moon Landing” | Written By: Anthony Paustian / Entrepreneur

Fifty years ago, NASA accomplished what many thought impossible: landing humans on the Moon and returning them safely to Earth. While most of us weren’t alive during that amazing time, the world is now revisiting the achievements of Apollo on its golden anniversary.

The Apollo program was the largest peacetime start-up and entrepreneurial endeavor in the history of our country. What NASA was able to accomplish through the efforts of over 400,000 people and 20,000 organizations was nothing short of miraculous. Below are several lessons from Apollo that apply directly to entrepreneurs preparing to launch their own “moonshots”:

Related: 25 Unforgettable Moments in Space Exploration to Celebrate the 50th Anniversary of Apollo 11

When President John F. Kennedy set the goal of landing a man on the Moon back in 1961, he committed the country to do something that nobody, including a three-year-old NASA, knew how to accomplish. American industry did not have the tools, equipment, spacesuits, computer technology, rockets, facilities, or experience to accomplish such a feat. And the challenge wasn’t just about what they knew they didn’t have, it was also about not knowing what they would ultimately need to be successful.

Despite the common metaphor of thinking outside the box when it comes to creativity, NASA realized the box itself was the key to success. Inside that box were the deeply rooted, time-proven values related to what the engineers already understood — the design and development of high-performance aircraft. NASA knew these fundamentals were the key to reaching the Moon, not by leaving the box and starting from scratch, but by expanding it through additional learning, intense creativity, and boundless innovation; all while holding true to their core engineering principles.

Creativity is the ability to visualize new connections between things yet to be connected. Breakthroughs are seldom based on discovering something new — more often they are the result of the “sticky thinking” that occurs when people stick things they already know together in new ways to achieve surprising outcomes.

The engineers, astronauts, administrators, and other “thinkers” at NASA relied heavily on sticky thinking during the Apollo program. By connecting things already found inside their box and adding in new ideas, they were able to extend the principles of existing aircraft engineering to the creation of spacecraft. As with any good business plan, the minds working on Apollo were also able to visualize possible “what if” scenarios and potential connections that may or may not occur during a mission, and through this, they developed contingency plans to overcome each should one occur.

Whether it’s Steve Jobs connecting fashion sense to the dull, colorless world of computer design or Elon Musk investing in the inevitability of tomorrow, imagination and the ability to visualize new connections has always been a key attribute to effective entrepreneurship.

Related: Buzz Aldrin Wants You to Know — the Sky Is Not the Limit

Business schools frequently teach the use of SMART goals (Specific, Measurable, Achievable, Realistic, Time-based) to achieve success. However, two of those elements — “realistic” and “achievable” — can limit entrepreneurial vision. Breakthrough achievements seldom result from SMART thinking and playing it safe. Landing humans on the Moon was extraordinary and required something different. It required HARD goals — goals that were Honest, Actionable, Radical, and Detailed.

After just one 15-minute spaceflight by Alan Shepard, for example, Kennedy announced the goal of landing on the Moon within eight and a half years. He was racing to beat a competitor (the Russians!) to market, and his goal was clear, compelling, and easy to grasp. It was also courageous and radical, especially in light of the social and economic issues the U.S. faced at the time.

Despite the program’s enormous scale, NASA allowed its people to take calculated risks, do unexpected things, show initiative, and utilize in-the-box creative thinking. After all, how else are you going to do something that’s designed to be radical? Despite the stress and pressure of creating something totally new and radical, NASA’s leadership and workforce remained focused and positive despite serious setbacks, one of them fatal. (Nobody said “radical” would be easy, and nobody expected it to.) They maintained a culture where anyone and everyone would be heard, and one where decisions were swiftly made and executed.

Landing a man on the Moon was a breathtaking feat, but the process of getting there was even greater. By allowing the young “entrepreneurs” at NASA and its partners to take giant leaps thereby forcing the innovation necessary to achieve Kennedy’s goal, NASA ushered in the digital age and the rapid growth of high-technology industries. Ultimately, thousands of new technologies and products were spun off from Apollo, establishing new markets and firms by a group of entrepreneurs who were inspired by America’s greatest entrepreneurial achievement.

Related:
Attempting the Impossible? Take These 3 Lessons From the Apollo Moon Landing
Karlie Kloss Looks to These Female Founders for Inspiration
This Hilarious Video Takes on Everything Awful About Open-Office Floor Plans