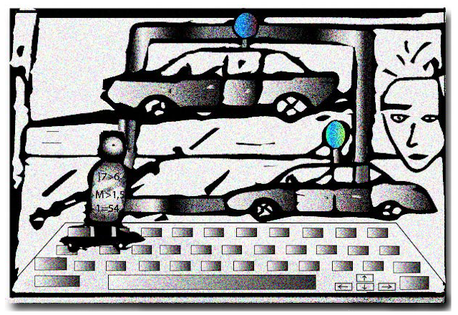 MY own graphic design and auto vehicle interpretation that started from a sketch. The robot turned out a bit funny though through Adobe Illustrator’s traces.

If you live in the Silicon Valley, you probably have seen the Google Cars map terrain and drive around your local highways or neighborhoods for mapping purposes. I remember some years ago, when I lived in Cupertino around 2014, I would go to the Stevens Creek Blvd. Shopping center to the Starbucks there near the Lawrence Express and, if I recall correctly, 280 freeway and saw these Google Cars with a round ball or sensor on top. It always struck me as odd because they seemed so small and colorful yet were so proficient on the road.

The project, which started as a secret Google X Lab program to map terrain, is now on the verge of commercialization while being in the hands of Waymo, basically a name change since late 2016 as it become a stand-alone subsidiary of Alphabet, which is Google’s restructured parent company. The Google Car is just one example of how far autonomous vehicles have come today. Now we have companies such as Lyft and Uber trying to capitalize on this emerging technology.

The commercial implications of autonomous vehicles are huge. I can think of some ways that they can be utilized in the workforce of the future: from store deliveries to the commercial truck driving industry to bus driving (or any public transportation) and the aforementioned ride sharing services (via companies like Lyft and Uber). The list goes on of ways these vehicles can make an impact if unleashed on the roads. Imagine not having to worry if your driver delivered a good on time because you can track it in real time and not have to worry about the driver or any employee for that matter being on sick leave or taking a vacation.

My own graphic design

Despite the potential in many fields and endeavors, autonomous vehicles are not without controversies. Last year, an experimental self-driving Uber vehicle struck a pedestrian in Arizona while she was walking on the street road resulting in her death. These are the small nuances that cause people to wonder if a self-driving vehicle’s algorithm along with its radar and camera systems are enough; if they can prevent such crashes in the future?

I see machine learning and AI over the long term being very useful in this regard; by being able to analyze its data and the data of other vehicles driving over a long period of time, it can adapt to daily driving conditions easier. Data analysis and machine learning algorithm advancements may be the difference maker needed for self-driving vehicles to be able to respond naturally to events and even to peoples’ own mistakes, like walking off a sidewalk and onto a street.

This is because they are usually not programmed for all such tasks and the various random events that can occur throughout a a driver’s day, but with time and data collection and a machine learning algorithm, it should be able to. As more data is collected and technology improves, so will self-driving vehicles. They already are much less error prone on the road than humans. Google, for instance, reported no crashes crash in more than 700,000 miles driven by them.

There are also the aspects of security to consider. If driverless vehicles get hacked or tampered with electronically, how much of an impact could this have on public safety? This is a problem with any emerging technology and various cybersecurity safeguards have to be up to the highest standards as well as authentications to make sure the right people are riding the designated autonomous vehicles with permission.

The University of Michigan actually conducted an experiment, according to CNN, showing that a decal put up at a stop sign could adversely affect an autonomous vehicle as well as the notion that an unscrupulous mechanic could in theory tamper with the system. Thus, these are all issues that need to be considered when implementing them on a large scale commercially.

The technology also still has some naysayers and it has been a slow process implementing it in a commercial sense. Uber and Lyft are still in the testing phase, although this is said to change soon. Apple was said to be working on its own Apple Car, dubbed Project Titan. However, there were reports earlier this year of layoffs regarding the engineers and support staff behind the project so its future is questionable.

Another variant of my design

A Business Insider report on Tesla, suggest the project may turn out to just be a software program and not a self-driving car in the hardware sense.

“The much-discussed Apple Car project has reportedly changed from an actual car into a self-driving software project,” the report states.

An Apple Inside report, however, sheds some light on what Apple may be planning to implement to the project if it does become a reality. The company is trying to implement a fiber optic lighting system that it is still trying to figure out how to make it aesthetically pleasing to riders within the vehicles.

The time may be right around the corner for autonomous vehicles to start making a big splash in the commercial sense as companies like Uber and Lyft may be close to unleashing them. A recent New York Times report suggests that both of these ride-sharing companies want autonomous vehicles on the roads in order to provide a 24-hour service on demand. Even when human drivers are sleeping or there may be low demand for them and they take the day off, these vehicles would be available to pick up riders at all times.

Lyft is placing such large bets on the technology that in its I.P.O prospectus it even admitted that if autonomous vehicles do not succeed, then its business prospects and financial conditions may be “adversely affected.”

The report also goes on to mention Google’s Waymo and how it is actually currently in a testing phase of actually taking Phoenix customers on trips in a service of sorts.

“[Waymo] is testing an autonomous ride-hailing service in Phoenix that is used by paying members of the public.,” according to the report.

However, even Google’s Waymo has a while to go as “almost 40 percent of Waymo’s customers registered complaints in reviews seen by the publication, from wrong turns to near-crashes.” The service is already charging money, but some customers urge Google to wait with the service as it currently works and for all of the kinks to be ironed out first. This shows that autonomous vehicles are not ready yet for prime time.

Despite this, Optimus Ride may change that in the coming months as it implements its own ride solution for autonomous vehicles in new York City. It plans on doing it in the second quarter of 2019, or any day now, according to a report form The Verge . It will be a shuttle service and not a standard ride sharing service, however, and be implemented at the Brooklyn Navy Yard. A further implementation in Northern California is also planned to residents of Paradise Valley retirement community.

“To be sure, robot cars won’t be jockeying for space in Times Square anytime soon, according to The Verge. “Optimus Ride’s autonomous shuttles will run in closed loops on private roads within the Brooklyn Navy Yard, a private, 300-acre World War II-era factory that’s in the midst of a high-tech reinvention.”

It will be interesting to see how disruptive these vehicles and the technology will be in the future. I previously mentioned some examples I see the technology making its presence felt and disrupting industries like deliveries, truck driving and ride sharing. However, other industries can also be disrupted especially in the age of the Internet of Things (IoT) where smart homes and drones are becoming ubiquitous.

Apple and Google are already making a dent in these industries so why not personal vehicles as well? When companies like Apple are looking into implementing such technology, we should ask ourselves what their ultimate goals will be? Could Apple become the next Tesla of personal vehicles and eventually every other home in the U.S. Would at least consider owning one with Apple’s or Google’s logos present? I do not think that is out of the question.

Many vehicles today use technology in assisted fashion. For instance, I have seen cars that allow drivers to park easier with an assist of sorts. One day you may be able to swap or trade in your current vehicles for driverless ones or ones that have options of a full assistive drive. I can imagine commercial vehicles offering full control of a vehicle to the driver, assisted drive and full automation being a possibility one day.

For now, you can rest assured that the current roads will be mostly packed with human drivers and all the perils that comes along with that (congestion or traffic jams comes to mind personally). So do not go trading in your current vehicles you rely on just yet. One day, however this may change and it is through these ride sharing companies that it may start until many other industries are impacted in a large way.