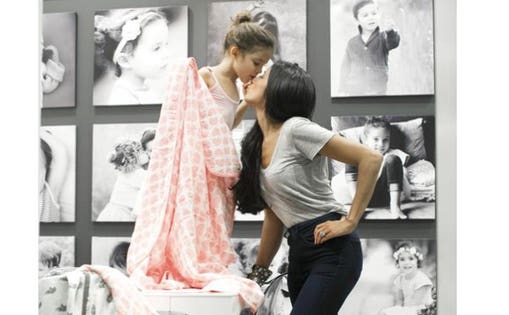 
When Monica Royer gave birth to her daughter in 2010, she recalls cradling her newborn for hours at the hospital — but a minor detail tinged the precious moment. “The clothing that the hospital dressed her in was too big, tattered and was likely worn several times before,” said Royer. But when she brought her baby home, she found that the brand new onesies and blankets that filled her child’s nursery weren’t much safer.

“They left her skin irritated,” said Royer. “I learned that so many brands sprayed baby clothes with flame retardant and had allowable amounts of lead.”

At the time, Royer had quit her job in pharmaceutical sales to become a full-time mom. But her newfound obsession with the types of fabrics that clothed and swaddled her newborn led her to launch Monica + Andy, a multi-channel retailer of organic and sustainably-made baby clothing. The startup’s signature “cuddle boxes,” gift sets containing stylish yet safe garments for newborns, helped it grow a following among celebrity moms like Jessica Alba and Serena Williams. The company announced it has raised $6 million in Series A led by Cota Capital and B2 Investment. To date, the Chicago-based startup has raised $12 million in venture funding.

Monica + Andy originally opened in 2014 as pop-up shops and boutiques that also served as meeting hubs for new moms. “I was a stay at home mom until she was 3 years-old so I felt lonely whenever I ran into problems,” she says. “This was something I needed to build for myself.”

In 2017, she launched an e-commerce, which is currently the largest and fastest growing part of her business, according to Royer, who declined to disclose revenue. She says a majority of the new capital will focus on digital marketing and improving its e-commerce experience. She also expects to add new hires to her packing and shipping team as well as content creators for her Monica + Andy blog, which publishes gift guides and wellness tips for new and expecting mothers.

While digital is driving growth, Royer says she will still fund experiential retail programs at her brick-and-mortars as well. Monica + Andy has roughly a dozen physical stores in cities like Chicago, New York City and Santa Monica, each hosting events and workshops like baby DJ classes, storybook hours, prenatal yoga as well as lactation and sleep-training consultants for new parents.

Royer admits she had an unfair advantage when it came to learning how to navigate retail, even in cities where commercial real estate is pricey. Her younger brother, Andy Dunn, is the founder of Bonobos, a menswear startup that was acquired by Walmart in 2017 for $310 million. “I had a front row seat to see what Andy had done as a pioneer for digitally native clothing brands and saw how he built a completely new marketplace,” says Royer. “He advised me along the way and introduced me to his network of retail experts.”

Dunn reinvented retail in 2012 by opening the first Bonobos “guideshop,” or showrooms that allow customers to try on items in-store and then deliver purchases straight to their homes. “Profitability is not easy if you’re overstocked which is why so many traditional retailers go sideways,” says Royer. But she would learn that the original guideshop concept wouldn’t work for children’s clothing. “When a three-year-old girl sees a pink tulle dress, they don’t care about direct delivery. They want to walk out wearing it,” says Royer. She adds that new moms and baby shower shoppers also prefer to walk out with purchases in hand.

“We had to come up with our own spin to guideshops by looking at the metrics to see how we can evolve,” Royer continued. After some trial and error, she found a middle ground by implementing a “nimble inventory model.” All Monica + Andy stores are now linked to its warehouse and distribution center in Chicago, which is charged with tracking bestsellers for each location as well restocking and replenishing them with new sizes and styles within 24 to 48 hours. Being merchandise-lite allows her to lease smaller and therefore cheaper retail spaces that never exceed 1200 square-feet. Her store in Boston, for instance, is only 300 square-feet and nicknamed “The Dollhouse.”

But no matter how small the store, the goal of community is not lost. “Even in that tiny store we have inventory,” says Royer. “We are even able to host classes for moms, they’re just smaller groups of five. And they usually just have to park their strollers outside.”

While Royer is most excited about creating boutiques that serve as community hubs for new moms, she says being nimble with inventory is the real key to running a profitable brick-and-mortar. She says the data-driven model also helped her convince investors to back not just her digital expansion plans, but her ambitions in physical retail as well. “The biggest challenge I’ve faced as an entrepreneur is raising capital as a woman with a baby brand, when so many VCs are males who aren’t in charge of buying baby clothes,” says Royer. “But I was fortunate to meet feminist men who believed in me and event-driven commerce.”