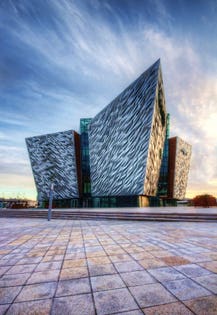 Belfast is one the U.K. cities boosted by a buoyant tech sector

Shipbuilding is deeply embedded in the city of Belfast’s DNA. And while the industry itself has withered, the steel-plated architecture of the Titanic Centre museum is a reminder that this town built the world’s most famous – and also tragic – ocean liner. Meanwhile, the iconic gantry cranes of the old shipyard are still very much part of the skyline.

But as old industries decline, new ones emerge and in modern-day Belfast, the digital tech sector -collectively speaking – is an increasingly significant employer.

At least that’s the finding of a new report published by the U.K. Government’s Digital Economy Council. Released to coincide with London Tech Week, the report finds that Britain’s burgeoning digital industry is having a real impact on employment – not just in the capital but across the country’s regions.

Based on 2018 figures compiled by the Office for National Statistics and online jobs platform, Adzuna, the report finds that in five of Britain’s major cities outside London, at least 10 percent of the working population are employed in digital sector jobs. That’s perhaps no surprise in the case of Oxford, Cambridge and Reading, but the presence of Belfast and Newcastle on the list suggests that the economic importance of the digital industry has spread beyond “usual suspect” knowledge-economy towns and out to the old industrial heartlands.

And this is important. The UK economy has done remarkably well at generating jobs in the face of Brexit uncertainty – employment levels are at historic highs – but there are doubts about the quality of at least some of the work on offer in terms of wages and conditions.

So the good news is that digital tech is a good payer. For instance, in Belfast, the salaries are a healthy 17 percent above the national average.

On the face of it, then, Britain’s growing army of digital startups and scaleups are doing exactly what politicians and policymakers always hoped they would – namely, creating lots of highly paid jobs.

But it’s a bit more complicated than that. George Windsor is Head of Insights at Tech Nation, the organization that carried out the research as part of its brief to promote growth in the digital economy. As he explains, while there were 1.7 million digital industry jobs advertised in the U.K. last year – one in five of the total – demand from Britain’s much talked about tech entrepreneurs represented only a part of the picture.

“The survey included people working for digital tech companies,” he says. “But the figures also include people working in tech roles in industries that are undergoing digital transformation.”

Within the tech sector itself, job creation is split between the behemoths of the industry and startups and scaleups. In addition, the survey also included non-technical roles, such as HR and marketing, within digital companies.

However, pointing to continuing high investment in early-stage digital economy companies, Windsor says scaleups and startups are an important component in the tech job boom. And as he sees it, the diverse range of employers is creating an environment that is conducive to the development of transferable digital skills. “For instance, people who work in companies such as IBM  can take those skills to startups,” he says.

From Tech Nation’s perspective, the research provides a revealing snapshot of the digital economy labor market at a time when the availability of talent is a key factor in determining whether young companies can fulfill their potential. “Our research suggests 70% of scaleups see talent shortages as an impediment to growth. And access to the right talent is seen as a key factor in accelerating growth,” says Windsor.

So with skilled people often in short supply, can the growth in tech jobs be sustained? As the digital sector expands disproportionately in relation to the rest of the economy, surely there will be a point when the pool of talent available is far outstripped by demand. Windsor acknowledges there is work to be done to ensure the talent pipeline isn’t choked off.

“In the short term, the digital skills required will come from people working in the digital industry but we also need to encourage transfers from other industries,” he says.  That will mean not only encouraging more people to study IT-related subjects at universities, but also creating and expanding educational pathways, such as apprenticeship and other forms of workplace training. Windsor also expects migration to play a continuing role in plugging the skills gap.

Rising demand for tech skills is a welcome sign that the digital economy is creating new and well-paid jobs, even in the old industrial heartlands, but further growth will depend on addressing skills shortages.