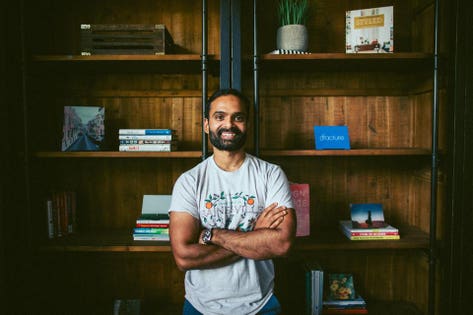 This holiday season many consumers will turn to prints as a thoughtful gift. This Florida-based company is making those prints with little waste, in a 30,000 square foot solar-powered facility, and investing in carbon credits. So can a holiday gift be carbon neutral? Fracture argues yes.

“Greenwashing by some of our business leaders today is frustrating,” says Abhi Lokesh, CEO and co-founder of Fracture. “We need buy-in from major companies on these sustainability efforts. It’s about actions, not words.”

Fracture specializes in printing images on glass, which distinguishes them from several other digital printing services available these days. All of the glass that’s leftover or not used in production is recycled, Lokesh says. “It took a ton of energy to find a partner who would take all that and recycle it. We had to seek it out.”

But he’s happy to do that search, he says, as he fine-tunes all aspects of the company to make it as eco-friendly as possible. Currently, the facility is run on solar energy, meaning all their machinery and equipment are working on renewable resources. By making items in the US, not only are they reviving manufacturing in the US, but cutting down on their carbon footprint. Each package of frames is shipped with minimal packaging — no bubble wrap, no fillers, no packing chips. And yet, even though it’s glass, it still stays intact.

That said Lokesh is not done. “We’re still looking for more eco-friendly materials to incorporate so that we can move further away from using petroleum-based products.”

Much of this drive to build a company that “treads lightly,” Lokesh says, comes from his travels and global awareness. He started Fracture after college: the vision was to create a nonprofit art gallery where artists could feature their work and if any were sold, the profits would help fund a nonprofit in Africa. Having worked in Swaziland on health and poverty issues, Lokesh had first-hand experiences of the challenges on the ground. Inspired by the idea that business could be a catalyst for change, he started a social enterprise, working with artists in the US to raise funds for development work in Africa. Unfortunately, that enterprise didn’t work out. But it gave him, and his co-founder (who has since left the company), Alex Theodore, the idea of Fracture and led them to an e-commerce startup.

“We spent about the first four to five years, just trying to get all the elements of the business to work. It wasn’t very profitable but we were building the foundation,” Lokesh says looking back.

Granted they started the business in the depths of the economic crash in 2007, which would could explain the slow start. With the help of Lokesh’s family, they were able to finance the venture. “I didn’t have any debt back then, which was also helpful. I could spend all my time on Fracture, and not have to worry about debt,” he notes.

They also had the hurdles of not being in Silicon Valley, but in Gainesville, Florida. “This was not a hub for startups, and finding the talent, resources, and mentorship wasn’t easy,” he adds. “Did I think about leaving? All the time.”

But he didn’t. Rent alone would have been double, if not triple elsewhere, he admits. But it was more than just that. “I loved the idea of building a business here, investing in the working communities, and creating an ecosystem that didn’t exist.”

Plus, Fracture’s model was not forgiving: it’s a volume-based business, with slim margins. Yet Lokesh stuck with the idea. With the launch of Instagram in 2010 and smartphones having higher quality cameras built into them, Fracture’s business model became more and more relevant — and his decision to stay in Florida made more business sense.

While had he had been thinking about sustainability from the get go, he admits they had to choose their battles, starting a business from the ground up.  One thing was certain, he says: “We had always been attracted to glass. It was environmentally-friendly but also timeless.”

That said, the images do come on a foam board, which Lokesh is looking at phasing out to an organic material. But the next step, he says, is trying to get some of their suppliers to also think about what materials they’re using, where, and how much. “It’s a bit of reverse engineering. We try to do as much as possible but we don’t make the glass for example, or the recycled paper we use. So helping suppliers also think through these challenges.”

As a $20 million company now, he says, they have some leverage to do that. Inspired by companies such as Patagonia and founder Yvon Chouinard’s entrepreneurial journey, Lokesh admits, “We are trying to stand on the shoulders of some great giants.”