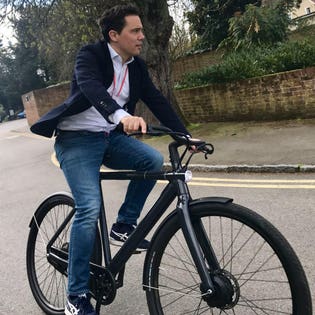 VanMoof co-founder Taco Carlier on one of his company’s e-bikes.

Amsterdam-based e-bike brand VanMoof has opened a new round of funding, seeking €7.5-million, of which €2.5-million will be crowdfunded (the maximum allowed under Dutch law).

This is the second round of crowdfunding. The first, in 2017, raised the €2.5 million maximum in seven days. VanMoof used the investment to open four brand stores across Europe, the U.S., and Asia.

The new crowdfunding–which reached €1.5-million within two hours of launch–will be used to scale up production, said a statement from VanMoof.

€5-million of funding is open to venture capitalists.

In April, VanMoof announced it had sold 11,000 of its electric S2 and X2 city bikes. The company said in a statement that the sales–worth nearly €30-million–were generated through its website and its eight standalone stores.

Taco Carlier, co-founder of VanMoof, said of the crowdfunding element:

What we are offering is a convertible loan. So that means that people provide a loan, and that loan will convert into shares as soon as a new investor steps in. Then people will get a discount on that conversion of 15 to 30%. So let’s assume someone lends us one thousand euros–that can take another year, and then one year later a [venture capitalist] invest in Van Moof at the valuation of x, then the crowd can convert their loans into shares, also at this valuation of x.”

This is a great tool for fast growing companies to postpone the federation a bit. It is easier to do crowdfunding, because if we do have had to do an evaluation–that’s obviously a lot of work and a lot of costs. So in this way, you leave the valuation to the VCs. But you do give the opportunity to the crowd to go invest to join.”

He added: “Our turnover has quadrupled this year. But this expansion in sales costs a lot of money. It’s a very capital-intensive business, we need to buy all the parts up front before we can ship out the bikes. So we need a lot of cash in order to grow our business.”

Investment will pay off, said Carlier, because e-bike sales–especially in Europe–are booming.

One million e-bikes were sold in Germany in 2018, a year-on-year increase of 36%. And in The Netherlands, e-bike sales have now overtaken non-electric bike sales.

Carlier believes VanMoof will continue to ride this e-bike wave:

“We believe the e-bike business is at the beginning of a very fast growth path. And therefore there is this big opportunity ahead of us. We need more cash in order to scale up sales in order to get more sales.”