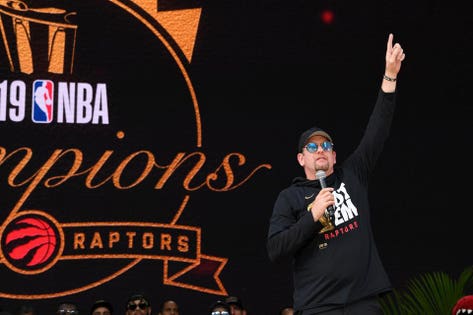 I enjoy basketball. But I admit that since I’m from a city without an NBA team, it wasn’t easy for me to get caught up in the playoffs – until I noticed that the Toronto Raptors, like my beloved St. Louis Blues, had never won a championship. It was another underdog story. Another David versus Goliath. It’s been almost a month since the St. Louis Blues won its first Stanley Cup in its storied 51-year history and the people are still abuzz. And, the Toronto Raptors’ fans are still celebrating how their team won its first NBA Championship, upsetting the Golden State Warriors, who won three championships in the last four years.

About three weeks ago I wrote about the lessons we learned from the St. Louis Blues and Coach Craig Berube. Just after that I heard from Shawn Cadeau, Chief Revenue Officer at Jobber, who apparently is as big a fan of basketball as I am of hockey. Jobber, an Edmonton and Toronto-based provider of home services management software, is laying the foundation for Raptors-like success. Just like I saw business wisdom in Berube’s championship coaching of the St. Louis Blues, Shawn saw valuable lessons for his company in the Raptors’ determination to go all the way.

Thanks to Shawn, here are some more lessons that businesses can learn from championship teams. These specifically focus on how the Raptors’ game plan came together and how any business, large or small, can incorporate some of these ideas to be more successful.

1.     Establish a game plan that plays to the strengths of your team: The Raptors excel at defense, and for good reason. The coaches and management recognized their players’ defensive abilities and played to those strengths. Coach Nick Nurse of the Raptors helped individuals strengthen what they were already good at. This made a good team even better. This is a classic strategy you’ll learn from the business book StrengthsFinder 2.0. Managers must serve as coaches, helping employees play to – and improve upon – their strengths.

2.     Create a culture of humility: The Raptors played unselfishly. It was all about the team – no selfish play. In business, we must hire smart people who are not only eager to support their teammates, but also willing to learn from them. Employees must put their egos aside and acknowledge when a teammate is better equipped to succeed, then be willing to metaphorically “pass the ball to them.” Building an environment where working together instead of competing against each other is the key to getting everyone to work toward the greater goal.

3.     Learn from your failures and try something different: The Raptors were recognized for some “outside the box” thinking. In one of the championship games, Coach Nurse implemented a defensive plan that was very unusual in the NBA – and it worked. Organizations must be flexible and willing to try new and different things, especially if traditional strategies aren’t working.

4.     Hire talent that thinks big: Want to win big? Then you must think big. Before you can win the championship, you must win in your conference. Coach Nurse influenced his team to think “big picture.” Even though he celebrated wins along the way, he always emphasized the bigger goal and kept it in the team’s sights. This was reinforced by bringing on proven performers with the right mindset, including Kawhi Leonard, Marc Gasol and Danny Green. After winning Game Four of the NBA Finals, even with a 3-1 lead, the team kept saying, “We haven’t done anything yet.” The win was great, but it was just one step closer to the big goal.

5.     Learn to take calculated risks: There is a big difference between gambling and taking calculated risks. The best sports managers know this. Back when the Raptors traded away DeMar DeRozan and Jonas Valanciunas, the fans were concerned, if not angry. Then, to add fuel to the fire, they replaced the previous coach with Coach Nurse. From the outside looking in, this was questionable. But sports, like business, is all about strategy – long-term strategy. Often organizations can be so risk-adverse that they don’t recognize opportunities that will pay off big in the long run.

So, what’s your game plan? Do you think long-term? What strategies from the Raptors and the Blues make sense for your organization? Like the Raptors, Jobber has established a winning game plan by putting in the effort to be successful and implementing a mindset of reaching greater achievement. How can you do the same? Adopt a winning mindset. Play to the strengths of your team. Think big. Learn from failures and try new strategies. Take calculated risks. Maybe you’ll win your own version of the Stanley Cup or NBA Championship. Or maybe you’ll be just a little more successful than you are today. Either way, it’s a win.