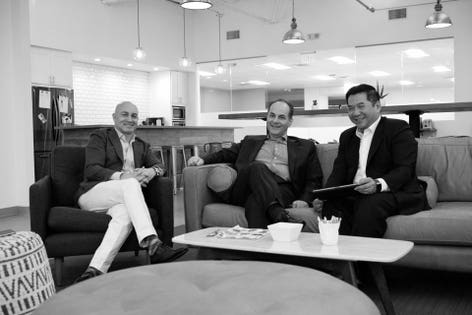 LA has arrived – to the startup scene. Silicon Valley and New York have long been the destinations for most US and international startups given their access to top tech talent, venture capital, and many of the other resources needed for startups looking to build big companies. Over the past few years, however, the LA tech scene has quickly been closing the gap. This city has successfully positioned itself as a legitimate – and very attractive – alternative for tech founders interested in building massive global companies from around the world.

So, what’s attracting founders to LA? Well, to start, it’s impossible to beat the beautiful sunshine and friendly LA weather. Add to that a lower cost of living than its Silicon Valley counterpart, growing access to tech talent and venture capital, a quick trip to SF whenever needed, and one can see why founders have started moving south. Speaking of capital, according to early-stage fund Amplify LA, 17 new funds have set up shop in Los Angeles in the last two years alone, doubling the number of local funds in the area. This growth inspired Greg Bettinelli, partner at LA’s prominent Upfront Ventures to launch Long LA, an open-source list of known firms and individuals with a home base or investment focus in Southern California, making it easy for any local entrepreneur to look for relevant investors and other sources of funding.

But great weather and ample venture capital alone won’t grow unicorns. It’s critical to have the right talent nearby, ready to execute on billion dollar ideas and start building a world-class track record. Over the last decade, a number of tech companies have gained unicorn status out of LA, with major exits for companies like Oculus VR, BlackLine, and Lynda.com. Combine these developments with game-changing LA-based startups such as Snapchat, Bird, LegalZoom and ZipRecruiter and it’s clear Southern California has the ability to build successful global companies across diverse industries. These successes in turn grow the ecosystem’s tech talent as most of these companies have grown in-house talent coming from local universities. In addition, smaller startups acquired along the way have flooded LA with deep talent from outside established local industries.

LA’s startup ecosystem boom has not gone unnoticed by Israeli entrepreneurs and venture capitalists in their quest to generate more success stories out of ‘Startup Nation’. Bahram Nour-Omid, Eran Gilad and Robert Mai took note of this growth and in 2018 teamed up to launch Scopus Ventures, the first venture fund committed to growing Israeli startups into global companies from Los Angeles. The fund has a major focus on B2B software and enterprise tech and $25 million in capital to invest in early-stage startups from Israel and the US. In many ways, they believe Los Angeles resembles the vibrant, techy and traffic-jammed city of Tel-Aviv, elements that should make Israelis feel at home in the fund’s backyard, while going after growth in the US market.

Gilad is a two-time CEO who used to split his time between NYC and Israel running his ventures. He saw firsthand the challenges of building a global Israeli startup out of New York.

“Yesterday’s market oligopolies are no longer a sustainable business model. In today’s world, you either win a market or lose it to a fast-growing competitor who leaves no room for other players to grow. Moving fast in a volatile, uncertain, and complex environment is imperative to succeed – a natural for Israeli entrepreneurs given their military experience,” notes Gilad. “Our role at Scopus is to provide a full journey and a platform for Israeli founders as they move through this complex environment, poised for success in the most capital efficient structure possible.”

A mix of family and career opportunities led Gilad to move to LA, where he met Nour-Omid, a serial entrepreneur who founded several companies – building and growing teams to significant success with numerous meaningful exits including Siebel Systems, VMWare, and K-12. Together with Mai – who spearheaded a Klingenstein & Field venture arm – they like the opportunity to invest in Israeli based in LA was too big to pass up. They decided to build a next-generation VC to serve not just as a trusted investor for their founders, but also correct some of the pitfalls they’ve encountered along the way in their entrepreneurial career.

“At Scopus, our core objective is to compliment the incredible raw Israeli innovation talent with business science”, mentions Nour-Omid. “We continuously monitor the way we help our founders establish their brand’s presence and operations excellence within the US market to grow wisely.”

This approach is welcomed by Israeli entrepreneurs hungry to learn from fellow founders who’ve come before them. One of the biggest challenges Israeli founders face when moving to the US is the lack of network and credibility – being viewed as an “outsider”. In addition, some cultural challenges remain – like a certain directness and chutzpah attributed to Israeli entrepreneurs. To bridge the gap, Scopus developed a platform with strategic value for founders, which includes connecting them with HR managers to source new hires; introducing portfolio companies to experienced sales managers to craft sales and marketing strategies for the US audience; and sharing a deep network of advisors and venture partners in enterprise companies to shorten sales cycles with US customers.

“We believe building great companies requires developing a strong working relationship with its founders. We continuously collaborate with our Israeli entrepreneurs in order to provide them with guidance as well as transparency. One of our primary tools is to provide full access to our office in Los Angeles to work and build their local teams”, states Mai.

So far, Scopus has made four investments in Israeli startups and is looking to grow it’s portfolio over the next few years, as LA is becoming a much more viable option for Israeli founders.

As excitement about LA’s thriving innovation grows, the city is also able to attract more venture capitalists moving from NYC’s tech community. Sarra Zayani, previously an investor with top NYC fund Greycroft Partners, recently decided to move to LA and join Global Founders Capital as a partner. Witnessing it’s growth from afar, Zayani couldn’t pass on the opportunity to move and bring her NY investing experience for the benefit of LA-based founders. “Over the next ten years, Los Angeles is positioned to become the next global technology city. The ecosystem’s diverse industries, thriving companies, and dynamic pace of innovation is attracting the world’s entrepreneurs to launch their next ambitious ventures here. Not only are founders migrating south from the Bay Area, investors are actively deploying capital and recognizing that the next wave of opportunities in tech will happen in LA,” says Sayani. “This paradigm shift is supported by the world’s third largest city by GDP, recent tent-pole $1 billion+ exits, and growing venture capital scene.”

Will all this attract the best Israeli startups to shift their US basecamp to LA? Time will tell, but as of now, it seems like an opportunity worth exploring.