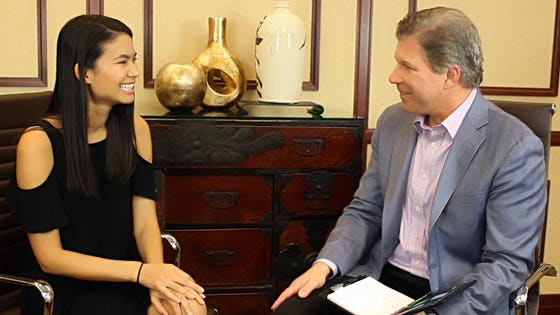 Serebral360° found a great read by Forbes – Entrepreneurs article, “Four Remarkably Simple Pitch Tips From An Entrepreneur Who Turned Her Idea Into a $2.5B ‘Unicorn’.”

“We like to set crazy big goals and make them happen,” Canva CEO and co-founder, Melanie Perkins, told me in a recent conversation. Crazy big understates Canva’s rare and remarkable accomplishment.

Canva is one of only 300 or so private companies around the globe that have achieved ‘unicorn’ status, a term for startups that are worth a $1 billion or more. When I met with Perkins, the company had just announced a new round of funding which values the company at $2.5 billion.

Perkins joins an elite club. At the age of 32, she is one of the youngest female founders to run a billion dollar venture-backed company. The story is even more remarkable when you consider that Perkins came up with her multi-billion dollar idea while attending university. At the time, she had no marketing experience, no business experience, and no contacts in the VC world.

Perkins doesn’t give many interviews because she’s intensely focused on one goal—empowering everyone to create simple designs. Her single-minded focus has turned an idea into a company of 600 employees who serve 15 million customers across 190 countries.

Perkins likes to joke that Canva is an ‘overnight’ success story that took eleven years to build. Perkins was rejected hundreds of times. Each rejection strengthened her resolve and forced her to refine her strategy and message. Today, Perkins has valuable insights to offer any business communicator with an idea to sell.

In 2007, Perkins was teaching her fellow students at a university in western Australia how to use to design programs like Adobe photoshop. “They were struggling just to learn the very basics. There were so many buttons and it would take months to learn…I wanted to make design ridiculously simple.”

Although it’s been 11 years since she experienced the frustration of teaching design with complicated tools, Perkins continues to share the story as a shortcut to help her listeners gain an understanding of the company’s value to millions of customers who share the same frustration. “A lot of people can relate to going into something like Photoshop or InDesign and being completely overwhelmed. It’s important to tell the story because if you don’t understand the problem, you won’t understand the solution.”

When investors rejected her proposal in those early pitches, Perkins realized that her presentation dived right into a solution from the first slide. Investors didn’t get it. Instead, she needed to articulate the problem, explain why it mattered, and why so many potential customers care about it.

“It was a pretty transformative thing that we learned while we were pitching investors,” Perkins added. “If you don’t understand the why—the problem—you’re not going to understand the solution, or even care.”

2.Use feedback to refine your pitch. Instead of getting demoralized after every rejection, Perkins and her co-partners would take the opportunity to make their pitch even stronger or refine their strategy. If an investor said that they they didn’t understand the industry, the problem, or how the company is different than anything that exists, Perkins would answer the questions in the next pitch. “We reiterated our pitch deck to start with the problem, the situation in the market landscape and to identify the gap in the market.”

3. Make each slide as simple as possible. When Perkins and her co-founders found out that former Apple marketing guru, Guy Kawasaki, was using Canva, they arranged to meet with him on a trip to California. Within a few weeks, he had signed on Canva’s Chief Evangelist.

Kawasaki told me he was attracted to Canva’s simple vision—to democratize design—and its simple interface. Canva employs hundreds of engineers and designers to build a platform and interface that makes it easy for anyone—especially non-designers—to create marketing material, graphics, and presentations. It would have been inconsistent with the brand for Perkins to show up to a pitch meeting with complex messaging and convoluted slides. “Just make it as simple as possible to understand,” she says.

Perkins recommends that each slide contain just one point—one key message. Trying to include more than one message per slide results in confusion, and confusing messages are easy to ignore.

4. Show it in pictures. “Don’t display a lot of text. Show it,” Perkins advises. Canva’s users have created 20 million presentations so far. Even the free version gives users access to hundreds of visually engaging templates, fonts, colors and over one million stock images.

Neuroscientists have known for years that pictures are more memorable than text alone, but it’s taken awhile for the information to make its way into the typical business presentation. Steve Jobs was an exception. Very few business communicators use as many striking visuals as Jobs did.

Part of the problem has been the complexity of designing visually powerful presentations in PowerPoint. It’s far easier to open a slide and write bullet points. Unfortunately, while it’s easy, it’s also the least effective way of communicating information. Perkins and her team identified the problem and created a drag-and-drop tool to make it easy to add and edit photos without having to leave the platform.

Most entrepreneurs would be thrilled to reach a $2.5 billion valuation. But Perkins is no ordinary entrepreneur. Yes, she’s extremely gratified to see how far her idea has grown, but she says it’s only the beginning. “We’ve only done about one percent of what we’d like to do,” Perkins says confidently. “When we say ‘crazy big goals,’ we mean—pretty astronomical.”