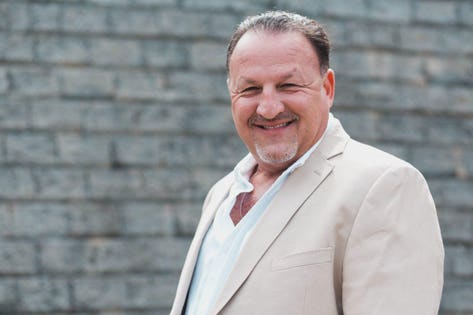 Michael Bordes grew up in the Bronx in the 1960s, the son of a New York City firefighter who, with two side jobs, probably brought home about $15,000 a year to feed and clothe a family of six.

“My parents had no money,” the 58-year-old Bordes said. “Raising four children in the Bronx, living in a bungalow with six people, is hard.”

Today, Bordes, together with his son, owns and runs AA Jedson Company, LLC, a commercial and residential builder doing $20 million annually. (More on that name later.)

“I’m projecting to do $30 million to $50 million next year,” Bordes said. “We’ve already signed $20 million worth of work for next year. We got very lucky in the fitness and restaurant industry in New York.”

One of Bordes’ clients, Rumble, recently had him build a $7 million, five-story boxing gym in Manhattan.

Bordes’ story, rising from a bungalow in the Bronx to running a company he believes will someday gross $100 million in annual revenue, is remarkable, and irresistable.

“Nothing has ever been lucky for me,” Bordes said. “It’s always been related to getting up in the morning and pushing myself. It doesn’t relate to money. I don’t live a lifestyle like my story tells. I live a simple life in a simple house.”

Bordes and his wife moved from the Bronx to Rye Brook, New York, to raise their son. The Bronx was rough when he was growing up, but it was far worse when Bordes was raising his son in the early 1990s.

In his own childhood, Bordes was a fighter.

“Children are rough,” Bordes says. “I grew up in a very rough environment. I became a very rough guy, a fighter type person, not one of those kids who wouldn’t defend himself.”

What did he fight over? Everything, including everything he wore.

“When I would see other kids wearing Pumas or Adidas sneakers, all my parents could afford were $3 Skippies,” Bordes said.

The clothes and the shoes Bordes wore were from Sears or Corvettes, meaning they were not fashionable, and therefore an invitation to relentless teasing. Teasing led to fighting.

One day, walking home from school, Bordes spotted an older kid shining shoes. Bordes went home to get his bike and followed the kid, undetected, to the Irish bars and Italian social clubs on his shoe-shining route.

On a Monday, he confronted the kid at his first stop, the Midget Bar.

“I said, ‘Listen, I’m going to start shoe shining. You can’t shoe shine in these places any more,” Bordes remembered. “From that day forward, I fist fought with this kid four times, until he decided I could have the route. He started delivering newspapers.”

Using his homemade shoeshine box, Bordes started working his route of bars and social clubs. He had to shine the bartenders’ shoes and those of his family for free, receiving only a Coke in payment.

“I had about 20 Cokes a day when I was shining shoes,” Bordes said.

But the paying customers took a liking to the spunky kid from the neighborhood, and tipped generously.

Bordes shined shoes every day for about two and a half years, saving up a few thousand dollars. But it was his next venture that would put him on the path to building the construction business he owns today.

One indulgence the Bordes’ parents managed to afford was subscriptions to magazines of the day like Popular Mechanics and Readers Digest. Bordes would devour the magazines when they arrived, especially the stories about how to build things.

“Every time my mother wanted something done they couldn’t afford to have it done,” Bordes said. “I would read in the magazines about how to do all these things my mother wanted done. I had very good eye-hand coordination, and I was able to read about how to install tile and sheetrock, how to do wallpaper. I started doing them in the house.”

Bordes’ 80-year-old mother still lives in the house he grew up in and she still calls him when she needs something done. His father died about 20 years ago.

“I don’t do it myself any more,” Bordes said. “She doesn’t ask for much, but when she does I send somebody over.”

When he was 20 years old, Bordes took the exam for the New York City Police Department at the insistence of his father, a lifelong civil service worker. He was accepted.

“My father says, ‘You have to take the job, it’s a great job,” Bordes remembered. “Then, when the fire department calls, go.”

Bordes, who was already building a construction business, sacrificed what he really wanted to do to join the NYPD. He spent three years in undercover narcotics, working from 10 p.m. to 6 a.m. He would go home, take a shower, then work construction until 4 p.m., sleep a few hours and report to work for the police department.

Even though he only worked four days a week every other week as a cop, it was becoming harder and harder to catch up on his sleep.

When he was 23 years old, Bordes got an offer from an architect to build him a house in Yonkers. It was a golden opportunity to build a $400,000 house, the equivalent of nearly a million dollar home today.

“I signed the contract to build the house, then I went to the police station and quit,” Bordes said. “I dropped off my ID cards, my badge, everything.”

Bordes’ father did not take the news well.

“Oh my god we had a brutal fight about that,” Bordes said. “He was always concerned about the economy. That’s why he had two civil service jobs.”

Over the next seven or eight years, Bordes did well building houses. In 1990 he bought two franchises for building greenhouses and sunrooms, paying $600,000 in cash. Then Black Monday struck in 1991. Three months later, his franchises closed and Bordes lost everything he had earned in his entire life, including two homes he was forced to sell, he said.

“The first thing I needed to do was put food on the table,” Bordes said. “My only concern at that point was bringing food home.”

As his situation continued to worsen, Bordes resorted to working as a messenger in the city, just to bring some money home.

“I still had an old pickup from construction,” he said. “I went downtown and the only work I would see in the paper for manual labor type people was for messengers or deliveries.”

In a good week, Bordes would make $150 to $200, about the same as he made at the height of his shoe-shining days, decades earlier.

“I did get a little help from my parents,” Bordes said. “It was just enough to get by.”

Then came the call from one of the guys at one of the social clubs in the Bronx where Bordes had shined shoes.

“He said they were building 10 houses and he asked me to build the houses for them, turning my life around again,” Bordes said. “For that guy I built 20 houses total in the Bronx.”

Bordes said he had relationships with employees stretching back for the better part of 30 years.

“When I got back on my feet they all came back and worked for me,” he said.

Today, with his 28-year-old son, also Michael, as a project manager, Bordes is reaching heights he never imagined. The name, AA Jedson, came from an internet search on his father initials – JEB – that came back wrong as “Jedson.” The erroneous name grew on him, and he added the two A’s for his and his son’s middle names, Anthony and Alex.

Bordes still has his shoeshine box, which he says sits proudly displayed on the highest book shelf in his Rye Brook home.