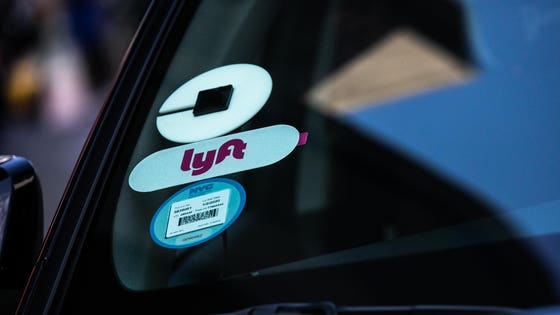 Uber, Lyft and other gig companies are caught in a tug of war. California is leading the charge to put them out of business. Texas and other states, even parts of the U.S. government, have taken the opposite approach. They’re making it easier for gig businesses to operate. If you’re a gig company and have the temerity to do business all over the country, it’s now officially chaos.

California—and other states—are writing new laws that will require many gig businesses to convert their freelance workers into employees. Currently, many gig workers get fixed fees. In some industries, that worker pay has been going down over time. Gig workers also have to pay their own “business” bills, which leaves many struggling to cobble together a decent paycheck. Hence the legislative push to beef-up worker protections.

But there’s no free lunch in converting workers into employees. The switch is estimated to cost gig businesses 20% to 30% more in worker-related costs. Gig companies will have to pay or provide these new employees with everything from minimum wages and overtime, to insurance, 401Ks, paid leave, tax contributions, unemployment benefits and the list goes on. The increased worker costs may very well have harmful consequences for all involved, some quite unintended.

Simple economics says that when you raise the cost of workers, businesses hire fewer of them.

In 2018, the California Supreme Court imposed a tough new test on gig businesses. As a result, more businesses must treat workers like employees and pay them a minimum wage and overtime pay. Right now, the California legislature is going even further with a new law, AB 5. This law will require many gig businesses to convert their independent contractors into employees and provide them with all of the benefits of employment status.

AB 5 doesn’t just threaten ride-hailing companies. Every business using independent contractors is at risk. In Hollywood, production companies and other players in the entertainment industry rely heavily on ICs. Throughout the country, many businesses use ICs as truckers, freelance computer programmers, pet walkers and home care personnel. Converting all ICs to employees would dramatically increase costs and reduce flexibility in plenty of industries.

California isn’t alone. Oregon and Washington are considering similar new laws. And it’s not just a West Coast troika. In December 2018, New York City adopted a $17.22 per hour minimum wage, after expenses, for drivers who get their passengers through a ride-hailing app. As a result, ride-hailing businesses’ costs have skyrocketed. Despite a challenge early in 2019, the new rules have been upheld.

Is the gig up?

Not at all—at least not everywhere.

Even parts of the United States government are endorsing the “employee-lite” business model. In January 2019, the National Labor Relations Board decided that franchisees driving shuttle vans at Dallas-Fort Worth Airport are independent contractors and not employees under the National Labor Relations Act (NLRA). Without employment status, these workers don’t have NLRA rights to unionize or act collectively to improve working conditions. In April, the U.S. Department of Labor piled on, issuing a controversial opinion letter that also makes it easier to treat workers as independent contractors and avoid paying them minimum and overtime wages.

The tug of war is far from over. Here’s where we are today:

What’s A Business To Do?

We don’t yet know whether tough new laws restricting gig businesses will pass in California or other key states—at least in their current gig-killer form. Industry heavyweights like Uber and Lyft have greater ability to lobby for changes. In fact, the New York Times reported on June 29 that Uber and Lyft were negotiating with unions over the terms of California’s AB 5. The ride-hailing companies are seeking to exempt drivers from the new law in exchange for recognizing a union that represents these workers.

Where tougher requirements apply, many businesses will have no choice but to satisfy the rules. Failure to comply is costly, even under the old rules. In the past few years, FedEx Ground has paid almost $500 million to settle two different class action lawsuits alleging the company failed to provide compensation and benefits to workers who should have been treated as employees.

But compliance does not come without a price. Some businesses—who don’t operate nationally—may be able to relocate to gig-friendly jurisdictions. Some companies will raise their prices—and customers will pay more. Some businesses will automate and employees will pay with their jobs. Uber and Lyft are still losing money and have predicted that their path to profitability requires automated driving—again, employees pay. Realistically, others companies will die out, business-dinosaurs overcome by competition that thrives under the new rules—here, many pay, at least in the short term.

For now, we have a tug of war between employee protections and gig businesses. Ultimately, we may end up with winners, but I doubt we’ll find clear victories or easy solutions. And it may get really hard to find a driver or pizza-delivery on a rainy Saturday night.