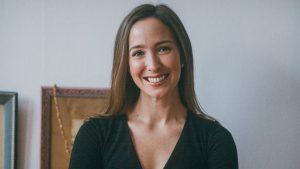 Serebral360° found a great read by Forbes – Entrepreneurs article, “Here’s How Hearables And Augmented Audio Reality Will Change Your Life.”

Katherine Prescott began her career in the world of finance, most recently heading up strategy at Highbridge Capital Management, a multi-strategy hedge fund firm. In late 2018, she started looking closely at the voice space,  and became intrigued by the possibilities of a future in which voice interfaces become as impactful  as web keyboards and mobile touchscreens.

This prompted her to launch VoiceBrew earlier this year,  as the first digital media company dedicated to helping people get the most out of Amazon Alexa.

Impressed with her thought leadership, I connected with her to discuss the entrepreneurial opportunities she foresees in the quickly evolving world of augmented audio.

John Greathouse: You spent a number of years at Highbridge Capital Management, helping folks diversify across alternative investment vehicles, such as hedge funds. How are you leveraging your investment experiences?

Katherine Prescott: One of the most important parts of running an investment organization is communicating with your clients, keeping them up to speed on what’s going (on) with the capital they’ve invested with you — how is performance? Where are there market opportunities? I had a wide range of responsibilities at Highbridge, and one area I focused on was writing investor communications that served as the bridge between the investment side of the organization and our clients — answering all of these questions. Today, I like to think of myself as a bridge in the same way. I help Alexa users learn about the amazing things coming out of the voice-first community — whether it’s an awesome new Alexa game skill from a third-party developer or a cool feature Amazon put out that’s under the radar, even if it shouldn’t be.

Greathouse: You started VoiceBrew to help people get the most out of Amazon’s Alexa. What do you think are the best uses (of Alexa) for someone just getting started?

Prescott: When I think about helping my subscribers get more out of Alexa, I start with things they already do every day and try to convince them to use Alexa to do those things instead of using an app or website or doing it manually. Take buying stuff on Amazon — that’s something a lot of people do multiple times per week, and it’s so much easier to re-order things with Alexa than through the Amazon app or website.

More broadly, I think we’re on the cusp of a big voice commerce wave. According to Evercore ISI Research, voice commerce is where mobile commerce was in 2011 in terms of the percentage of consumers in the US who purchase through the channel. So, if I were an entrepreneur interested in building a business in the voice space, I’d take a hard look at voice commerce.

Greathouse: Agreed – it’s early days in the voice commerce world. In addition to commerce, I’m intrigued by the less obvious impact of augmented audio reality. How do you define this emerging technology?

Prescott: Today, when people talk about augmented (audio) reality they’re usually referring to audio content customized for your location. One super simple, low-tech example that’s been around for years comes from the US Open Tennis Championship. When you go watch the US Open live, you can get American Express headphones that let you listen to John McEnroe’s commentary from the TV booth while you watch the match. That’s augmenting your reality of watching the tennis match with audio commentary.

Greathouse: Right, this is the sort of augmentation we’ve been getting in museums for years, before those semi-filthy headsets were replaced by smartphone apps.

Prescott: Exactly. More high-tech augmented audio reality today could be based on your phone’s GPS — say you downloaded an app that could tell you a cool fact about a building you’re standing in front of because it knows exactly where you are. Or say you use the Amazon Alexa location-based reminder feature to remind you to put the laundry in the dryer when you get home. Those are other ways you could experience augmented audio reality.

Augmented Audio In The Age Of Smart Speakers

Greathouse: It’s hard to believe that Amazon first introduced the Echo in 2014, as they’ve become ubiquitous so quickly. . How will smart speakers fit into an augmented audio reality world?

Prescott: Bret Kinsella, who is the Founder & Editor of voicebot.ai, describes smart speakers as the training wheels that help people get used to the idea of talking to their technology. I couldn’t say it better than that. If you’re getting information via your hearable, it makes a lot of sense that you’d request it by asking for it versus tapping something into your smartphone — said differently, it makes sense that audio output would be prompted by voice input.

So, I think augmented audio reality will take a big leap forward as people continue to adopt voice as one of the main ways they interact with technology, including their hearables. Plus, as we increasingly use assistants through smart speakers, assistants are getting to know us and our preferences — so the experience is becoming more personalized and better.

Greathouse: Yea, I’m hearing more and more radio stations guide their audience to locate their station via voice. For instance, NPR encourages their listeners to, “Tell your smart speaker to play NPR.” It’s funny that we still have to remind users of this functionality, shows you how far we have to go.

How do you think it (augmented audio) will manifest itself with hearables and wearables and what do you see as near-term opportunities for entrepreneurs to create solutions for this emerging market?

Prescott: Hearables or wearable audio are just fancy words for things like Apple’s AirPods or even hearing aids.

The hearables opportunity set is really topical right now because Amazon just announced a couple of weeks ago new tools for device makers that are putting Alexa into headphones, earbuds, etc. — including GPS location support. That means users will be able to easily ask Alexa, on-the-go, for directions from Google Maps or other location-specific questions like movie times or weather.

Having a voice assistant in your ear is the ultimate augmented audio reality experience. And since on-the-go is a whole new context for Alexa, in the not-too-distant future, we’re going to need a whole new crop of Alexa skills to go along.

Plus, it’s been rumored that Amazon is putting out Alexa earbuds later this year, so you can bet there will somewhere in the neighborhood of a million people with Alexa in their ears 12 months from now. Developers should start thinking about creating those on-the-go Alexa skill experiences — if you’re an entrepreneur looking for a “why now,” this is a great one.

The Future Of Augmented Audio Is Now

Greathouse: What does wearable technology look like in 5 – 10 years? It took Sonos about 15 years, and a lot of money, to crack the audio hardware market. Do you think startups can make an impact before the industry is dominated by established players?

Prescott: In 5 to 10 years, I think it’s very likely that people will wear discreet earbuds 24 hours a day, and that will give you seamless access to your voice assistant to do tasks like “Call my mom,” “Play my podcast” — or when you’re in the middle of a work meeting “Pull up xyz statistic.” And it will also tell you important notifications like, “You sound like you’re getting a cold” or “You should leave now for your next meeting — otherwise you’ll be late.”

It’s possible you won’t even have to say these things out loud, that thinking a request could prompt a device to respond to you. There’s a project in the MIT Media Lab called AlterEgo, which is a device that you wear over the ear and along the jawline that does exactly this by measuring electrical signals the brain sends to internal speech organs.

There’s also a chance people will wear devices that are more than earbuds and have a display option (think a version 2.0 or 3.0 of what Google Glass tried to do). That would make assistants even more powerful because they could give you audio and visual responses to your requests. For example, directions would be much better with a map that you can see as well.

I think there are lots of ways that start-ups can be part of this evolution. As you pointed out in your Sonos example, it would be challenging for a startup to create a new dominant assistant or wearable (just like it was tough for a startup to create the new dominant phone), but startups could build the dominant augmented audio reality application for assistants just like startups like Uber built the dominant applications for the new smartphones.

Greathouse: I want to end by getting your thoughts on an ethical question that could be a Black Mirror episode in the making. As we know, all smart speakers must “listen” at all times in order to hear command words. As such, do you think the makers of smart speakers should be morally obligated to program their devices to contact the authorities if it’s clear a violent crime is in progress?

Prescott: Yeah, that is the sort of tech-driven dilemma we should anticipate, as augmented audio and smart speakers become more integrated into our daily lives. I’m going to turn this question around — how about smart speakers as a way that people can keep themselves safer?

A setting that you could easily opt to turn on that listens for signs of violence — breaking glass, crashes, screams. Alexa Guard, which can alert you if it hears breaking glass or a smoke alarm, already provides some version of this, and I think it makes a lot of sense to expand on it as the technology develops. When it comes to privacy in general, I believe users should get to decide which recordings of their Alexa interactions are stored in their history.