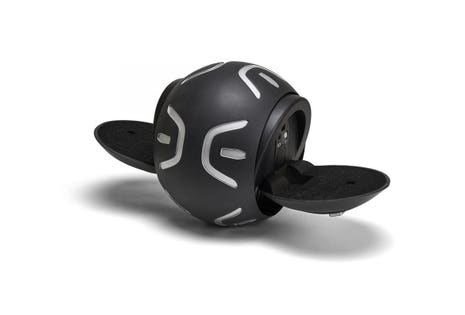 The Jyroball looks and carries like a bowling ball with sides that flip down into foot plates. Here, the near side of the ball shows the battery indicator and the charging port.

It functions like a hoverboard with lean-in acceleration, but it charges like a scooter and looks and carries like a 10-inch bowling ball whose sides flip down to become foot plates. The idea behind the Jyroball is a solution for the first and last mile of trips in U.S. cities years in the future, when we’re in autonomous ride-hail vehicles and electric buses. Scooters, bike shares, and hoverboards aren’t an easy carry now and won’t be as much use then, if urban futurists have sketched out accurate predictions.

For today’s commuters, the Jyroball will work on either end of a transit trip. Or you can keep it in the trunk of your own car for areas with difficult or expensive parking.

Unlike scooters and bikes, you won’t rent a Jyroball for a few minutes or hours at a time. At least not immediately. It will sell retail for $899 but a temporary promotion on crowdfunding pre-order platform Indiegogo offers a $395 price for an estimated October shipment.

As a single-wheeled vehicle for individual consumer purchase, it’s closer to the OneWheel or the IOTATrax than rentable micromobility vehicles like Jump bikes and BIRD scooters. But Bird is selling product now too, with its BirdOne scooter available for pre-order.

It’s the latest iteration in forward-thinking design for a future of urban density, but micromobility to take you back in time is a growing business. Companies want you to get around by being a kid again. Even shared pogo sticks are now actually a thing. You can remember the days of getting your friend on your banana seat or your handlebars for a few miles with Bird’s new two-seater electric bike announced today. (Both the Cangoroo pogo sticks and the Bird Cruiser bike will be offered as rentals, not for purchase.)

The Jyroball is the invention of Dublin-headquartered MOBY Micro Mobility. Founder Thomas O’Connell carried forth his experience with eye-catching motion-oriented whimsy for all ages from Yvolution. The company manufactures, among other things, illuminated sneakers, balance bikes and two- and three-wheeled scooters skateboards. Jyroball inventor Marc Simeray invented and holds the patent for the self-balancing unicycle.

The 20-pound, 10-inch Jyroball can be carried like a bowling ball. A carrying case is optional.

O’Connell and Simeray began developing the Jyroball about a year ago, and worked through three prototypes to get to release. The final version of the product is a 500-watt, electric rolling ball that charges in under two-and-a-half hours. It will take you up to just under 15 miles, with a top speed of 12.4 miles per hour. That is, if you weigh less than 220 pounds, its maximum load. You’re good through urban environments, including rain. The IP54 weather protection, in plain English, means it can handle rain and runoff but you shouldn’t submerge it. Be a grown-up. Don’t try to race friends through low surf at the beach or deep puddles on the street.