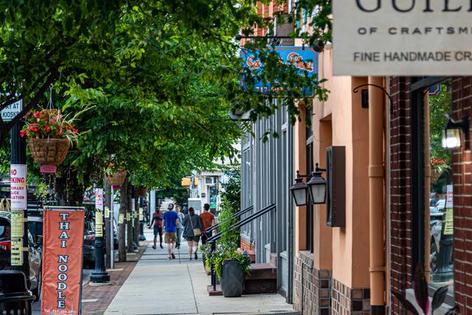 Serebral360° found a great read by Forbes – Entrepreneurs article, “How One (Crazy) Main Street Entrepreneur Sparked A Renaissance In A Small Pennsylvania City.”

Lancaster, Pa., is in the midst of an arts-led economic renaissance.

“Walk down to my store,” Steve Murray said to me urgently that day in the mid-1990s. He’d reached me by phone, in the newsroom of the Lancaster Sunday News, where I was the cops and business reporter (it was a small staff!!).

I walked about six blocks up Queen Street, one of the two main streets in the small city of Lancaster, Pa., about an hour-and-a-half west of Philadelphia. The city is historic, but in the 80s and 90s it had fallen into the familiar narrative of urban decline.

Murray never seemed to notice that the world around him didn’t match his style. There he was, standing in the middle of his vintage shop in a historic storefront, loving the Deep Throat role he’d given himself. Zap & Co. was filled to overflowing with brooches the size of lobster claws, hats like flying saucers, floor-length gowns and psychedelic shirts, inventory that brought to mind Wallis Simpson, Grace Kelley and Cher … all at once.

He was about to hand over to me the super-secret plan for the economic revival of Lancaster City, along with an explanation of why it was ALL WRONG.

Murray was a renegade business owner who believed deeply, passionately, that the city of Lancaster was a beautiful place, that the fading Victorian buildings could regain their former glory, that people from big cities would flock to the small downtown if there were good restaurants and more shops like his. Twenty-five years later, events would prove him right: Lancaster is in the middle of an economic renaissance.

It’s a lovely, vibrant small city now, with a progressive mayor and a growing national reputation as a place that has welcomed refugees without abandoning its conservative roots.

Tom Friedman, the columnist for the New York Times, recently covered the comeback in a piece that focused on institutions and the powers that be in Lancaster, wealthy people who got together about 20 years ago and decided not to abandon the city. They did so via the Hourglass Foundation, which Friedman wrote about.

But the coverage got me to thinking about one thing we often miss when we record how change happens. Institutions are important. But their role comes after individuals and dissenters have shaken up the system, long before it is popular or safe to advocate for a cause. We record the still-crucial-but-easier part: throwing money at an idea that has already been hatched and nurtured by the risk-takers.

The truth is that Lancaster’s economic renaissance would never have happened, at least not in the way it did, without Murray. His persistent advocacy and vision — and sheer cussedness – imbued the change with an appreciation for the arts and the emotional reality of relationships, between people and between people and the places they live.

The barriers are that much higher for the unglamorous storefront entrepreneurs that are the backbones of Main Streets, who need capital for physical inventory and space. Steve Murray’s store was never going to scale in terms of revenue. But he had scale in another way: His vision scaled.

An Early Anchor For Downtown Retail

A child of 1960s, he’d opened Zap & Co. in 1976, and eventually added two more retail operations, a military surplus shop and a record store, to his tiny empire on a rundown block. He encouraged other retailers to open, teaching them what he knew about bringing people from the city, and developing other lines of revenue (he rented and sold clothes to movies to supplement his retail income).

Twenty years after his opening, Lancaster was still struggling. But he hadn’t given up hope

The day he handed me the super-secret plan, the powers-that-be in the city, meaning people like the Chamber of Commerce executives, who were mostly nice white men in blue button-down shirts, plus the few remaining wealthy people with city real estate, were hatching a plan to rip down the storied department store building that anchored the city square. They wanted to erect— “get this,” Murray said, “like, a cut-rate hotel or something.”

He threw a few choice words in to emphasize how stupid this was. He had argued that the department store could become an arts hub (several sprang up in the city later, proving his vision true). Maybe there would be a boutique hotel. Maybe breweries like those that littered the city in the early 1900s.

He passed along a two-inch stack of paper. It was there, in black-and-white: a bland, pretty safe approach. I wrote the story, which spurred more questions about whether the Watt & Shand building could be saved, and dozens of others over the few years I worked in Lancaster, chronicling Lancaster’s descent and the beginnings of its hard-fought slow revival.

The powers-that-be did tear down a lot of the Watt & Shand building, but they kept the facade, in a compromise. They built a Marriott. The city has come back and developed an artistic base, the vision has been upgraded. The downtown streets are lined now with dozens of galleries, jewelry stores, high-end restaurants, artists’ and makers’ collectives and vintage shops.

A later mayor gave credit where it was due, speaking to the Lancaster newspaper: “Without Steve’s foresight a decade before the convention center was built, downtown would not be what it is today,” Rick Gray said.

Murray, 68, died this spring. Zap & Co had been destroyed in a fire in 2011, which left him with third-degree burns. As indefatigable in his recovery as he had been for Lancaster’s development, he won the admiration of the community for his courage after the injuries, and a big memorial service was held, attended by hundreds of people wearing cocktail dresses and top hots. I didn’t go, but I thought of Murray when I visited Lancaster this spring, and again when I read Tom Friedman’s piece.

I don’t know how you find and support people like Murray, but I do know it’s important to listen to them. As I’ve been writing this, I’ve been thinking of another assignment the newspaper sent me on, to cover a fashion show at a nursing home.

The elderly ladies had put on the most glamorous floor-length gowns, all silk and taffeta, with peplums and the long silhouettes of the World War II era. A woman named Vanda waltzed down the aisle of folding chairs in a fawn-colored number with sequined shoulders that looked like it ought to be brushing the floor of a New York City nightclub to Tommy Dorsey music. And there in the back of the room was Murray, leaning on a clothing rack. He’d lent the dresses to the ladies, and I knew from his smile that he was loving every minute of it. He really did have that eye for beauty.