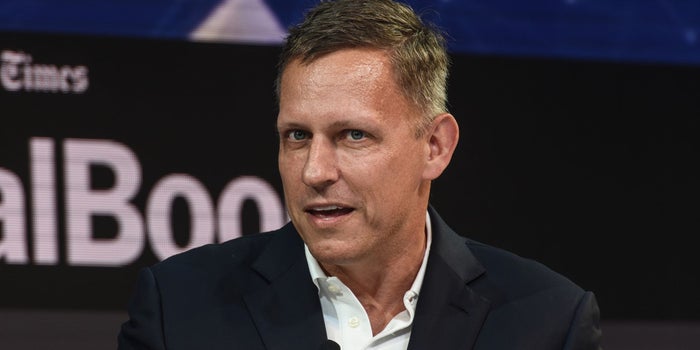 The San Francisco Bay area is home to some of the wealthiest businesses and individuals in the world, and they have developed a new obsession with aging. Google and billionaire investor Peter Thiel are investing heavily in technologies that will slow aging and support longevity.

Wealthy elite in Silicon Valley aren’t altruistic, but they are funding work that could be of great value for the United States economy. Millions of elderly Americans suffer from Alzheimer’s or other chronic diseases, and the medical costs are astronomical. If Silicon Valley funded companies develop technologies that increase healthspan — the length of time a person is healthy — that would be of great importance.

Related: 100 Is The New 60: The Transformation Of Healthcare

In the early 1900s scientists discovered that stitching together two mice — one old and one young — could affect their physiology. In simplified terms, the old mouse got younger, but the young mouse got older.

Over time and with refinement, scientists created a technique known as heterochronic parabiosis, which helped in the study of aging. Scientists learned that removing inhibitory molecules from old blood could help elderly animals become more youthful.

Within the past decade, research at UC Berkeley and other locations has led to identifying and finally implementing some aspects of the procedure. Several biotechnology companies have partnered with researchers in the field to create a Heterochronic Optimized Plasma Exchange (HOPE) procedure. Working together with clinician Dr. David Haase, they have produced encouraging preliminary results.

Other companies have less-measured and borderline haphazard implementation of similar protocols, which costs $8,000 per person to start. Beyond the risk, the cost is considerable.

For now, the procedure is available to higher net worth individuals, but with adequate funding and attention, scientists and clinicians may be able to isolate individual blood markers or full-system processes to promote healthful aging.

Beyond the basics: Fasting for longevity.

Using youthful blood to overcome aging is currently a fringe pursuit far outside the realm of basic wellness. Some of the most successful cultures maintain long, healthy lives outside the technology haven of Silicon Valley.

Regions which have disproportionately large centenarians (people who live beyond the age of 100) are known as “Blue Zones.” These communities, living in places such as Okinawa, Japan and Sardinia, Italy, maintain basic lifestyle practices that don’t require a $8,000 young blood procedure to achieve. The research conducted by Gianni Pes and Michael Poulain in the Journal of Experimental Gerontology concluded the following characteristics were particularly valuable:

Related: How and Why Entrepreneurs Should Focus on Seniors in 2019

The observational data is useful and provides context for developing our own lifestyle. They are particularly valuable for the entrepreneurs among us who de-prioritize some of these activities to emphasize other things.

For the hard-charging, high-performance individual, other practices like fasting are becoming popular. In Silicon Valley especially, robust research in the field of fasting — known as calorie restriction in the research — is garnering new adherents.

In fact, of all the interventions that you or I could do to combat aging, restricting our calories is the most efficient. There are numerous scientific pathways that make calorie restriction effective. A well-articulated paper “Does eating less make you live longer and better?” identify some of the main pathways like sirtuins, AMPK and mTOR.

By understanding these mechanisms, scientists have uncovered numerous other molecules and interventions that we can use to combat aging. One of them is the increasingly popular ketogenic diet, which can support mitochondrial health and activate numerous pathways similarly to fasting. Another is a molecule known as NAD+ (nicotinamide adenine dinucleotide), which has grown to prominence in anti-aging and longevity communities.

Could NAD+ be the answer?

Replicating fasting with a pill neglects the fact that humans are a complex system with many levers we do not yet understand. However, there are many people who simply prefer not to fast, but want to achieve some of the benefits for the sake of healthspan and longevity.

For them, the idea of a supplement that can support healthy aging is appealing. One major target is the NAD+ molecule, which is not bioavailable, or absorbed, in supplemental form. This forces enthusiasts to find alternatives like nicotinamide riboside (NR), which has been a darling in the anti-aging community for many years. With a price tag of $3-10 per day, it is often cost prohibitive.

Another alternative, nicotinamide mononucleotide (NMN), recently increased in popularity due to a Joe Rogan podcast with Harvard researcher Dr. David Sinclair. At a minimum cost of $3+ per day, this too is not an intervention to sneeze at.

But there may be another way. According to naturopathic doctor, Gregory Kelly, “There’s been a huge growth in interest in boosting NAD+ using what Neurohacker Collective thinks of as newer niacin equivalents – NR and NMN. What seems to be overlooked or forgotten is that the older niacin equivalents (niacin, niacinamide, and tryptophan) also boost NAD+.”

Kelly is the head of research and development for Neurohacker Collective, which launches a cell energy and anti-aging supplement called Eternus this month. One of their objectives is to take the complex science associated with aging and make it digestible, both from an educational perspective and in pill form.

Related: How Entrepreneurs Can Capitalize on 3 Industries Primed for Disruption

Adding health to your years.

Whether we will be able to live forever as some Silicon Valley types desire remains to be seen. Exponential technologies will certainly impact lifespan over the next few decades, but it is more valuable for us to consider enhancing our healthspan versus our lifespan.

The healthspan is the measurement that allows us to spend time with family, maintain memories and be physically active without pain. With simple lifestyle changes, dietary interventions, and even supplementation, we can leverage the investments from Silicon Valley executives to live better and perhaps longer.

Related:
How Silicon Valley Plans to Live Forever
Sluggish Bureaucracy Is Blamed for Disappointing Marijuana Tax Revenues in Massachusetts
"The UAE Has Come Of Age In Terms Of Tech Prowess" – Muna Al Gurg, The Only Emirati Investor In Careem, On The Company’s Acquisition By Uber