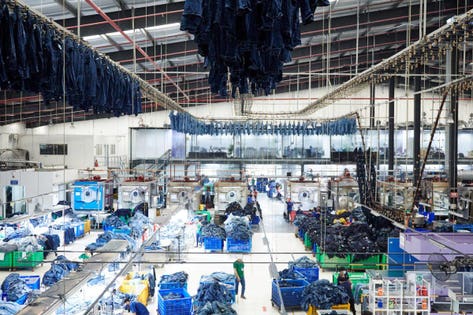 Serebral360° found a great read by Forbes – Entrepreneurs article, “How This Denim Manufacturer Became The First B Corp Factory In Asia.”

Saitex facility in Vietnam, which recently received B Corp certification.

This week, Saitex, a denim factory, became the first certified B Corp factory in Asia and the only large scale manufacturer of denim to adopt the standards set forth by B Lab, a Philly-based organization looking to redefine business with an emphasis on people and planet.

Started in 2001, Saitex’s facilities are in Ho Chi Minh City, Vietnam. At 22,000 cubic acres, this is not a small operation. The company produces an average of 18,000 pairs of jeans every day. The whole process from denim washing, sewing, and finishing all happen on site. Saitex claims that using their water-saving techniques, they’re able to cut down the amount of water used on each pair of jeans from 80 liters to just one. Plus, the factory itself is run on renewable energy — including wind, solar, and biomass— to diminish its own carbon footprint.

Founder and CEO Sanjeev Bahl hopes that other factories follow suit in getting a B Corp certification.

“We are the first large scale denim manufacturer and the largest one headquartered in Asia to achieve this certification and we did it because we are very keen to maintain our position as an industry leader. Not in a competitive stance, but rather because we want Saitex to be a guiding light across our fashion industry and beyond. We are worried about the amount of greenwashing happening across our industry, it’s very easy for these efforts to be seen as “good marketing” and not be held to the highest integrity.”

Saitex argues that they’ve been able to cut down their water usage by 98% in manufacturing denim for American brands.

Saitex scored 105.3 on the B Corp’s index out of 200. To get the B Corp certification, companies have to go beyond 80 points. Bahl explains that “while the investigative process is uniform for all companies that apply for B Corp Certification, based on the size and scale of our operations along with the layers of the manufacturing we perform as a vertically integrated factory, Saitex did have a more lengthy experience to achieve this benchmark. We prepared for over two years to be in our highest degree of performance and tested all compliances before we attempted to get the certification.”

Saitex carries a few more certifications that add to its eco-friendly positioning: it’s bluesign approved, which relates to the finishing chemicals used on clothing to make them softer, wicking, or water-repellent. Bluesign maintains environmental standards to minimize the impact of these chemicals in local waterways and cut down on the overall use of toxic chemicals in the industry. In addition, they’re a LEED-certified and Fair Trade operation: the former speaks to the structure and energy usage of their factory and the latter addresses fair working conditions and labor standards. But there’s a lot more they do, including a hydroponic farm for their staff to get pesticide-free, fresh food.

Bahl argues that this onus on environmental and social issues has been embedded in the organization from the beginning: “Our business model has been built from day one on the three P’s: people , planet , profits. And the 3 R’s: reuse,  reduce, recycle. Without The B Corp process we would have continued on our path to prove that business can indeed a source for good, but not experienced the acceleration of this through the process of achieving B Corp.”

Though many companies have such practices in place, the B Corp framework, Bahl says, helps give the business an outsider’s perspective and “a measure of accountability that would transcend our business’ self governess.”

So can one factory inspire others to follow suit? Could this be a turning point for B corps, pushing manufacturers to think about certification as much as the consumer-facing brands selling their creations?

Bahl hopes so, and is keen to share their insights and learnings with others in the industry, he says. “We have always maintained Saitex as an open platform and are eager to share our information and process. We hope to spread the impact quickly and we are excited to collaborate with other B Corps to bring new ideas and innovations into the world. It is through these actions, we can achieve a definition of what responsible production and how companies can shift consumer behavior to address the major issues our planet faces.”