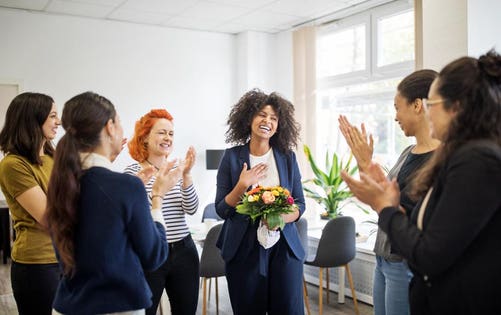 “How Women Entrepreneurs Are Breaking Free Of The Pay Gap (And The Best Cities To Be In)” | Written By: Tanya Tarr, Contributor / Forbes – Entrepreneurs

Today is Women’s Entrepreneurship Day, celebrated on November 19th to honor how women are advancing as entrepreneurs and business owners across the world.  Historically, women have controlled a vast majority of small to medium consumer choices, representing trillions of dollars in revenue. But how long will we have to wait for that purchasing power to transform into full executive power and representation?

While I often write about negotiation and equal pay in the context of working within an organization, entrepreneurship presents another way to close the leadership and pay gap: become your own boss. It’s a popular pathway that women are taking to close their own individual gaps. A study from 2018 commissioned by American Express showed that 40% of businesses in the United States are women-owned, with nearly half of those business owners being women of color.

Yet significant gains still need to be made for women to achieve full economic parity, particularly on a global scale. Research commissioned by Dell Women’s Entrepreneur Network may suggest that women are poised to have a breakout decade starting in 2020. Released this past summer, the annual Women Entrepreneur Cities (WE Cities) Index tracks 50 global cities and their success in fostering growth for women-owned start-ups. In partnership with IHS Markit, Dell continued a 10-year examination of indicators that help female business owners succeed, including access to capital, technology, talent, culture and markets. The full report details how these indicators can inform policy that boosts the success of women-owned businesses.

The top three cities for women entrepreneurs include the Bay Area in California at #1, New York City at #2, and London at #3. The full 50-city ranking for the annual WE Cities Index is below, with green arrows indicating an upward shift in rank, red indicating downward shift, and yellow indicating no major shift.

When compared to findings from 2017, the WE Cities report found that 30 out of 50 cities improved on a majority of their indicators, with Europe and Latin American showing the biggest gains. The report also showed that the increase in positive gains was distributed across every continent, which suggests global momentum towards supporting women business owners. Mexico City exhibited the largest improvement, moving from #45 in 2017 to #29 in 2019. Part of Mexico City’s success in moving the dial is likely linked to changes that include increased representation for women in business schools and legislatures, increased participation in corporate vendor procurement programs and access to capital for women entrepreneurs through crowdfunding campaigns.

Austin, Texas (where I live) ranks at #14 overall for women entrepreneurs. It’s also not surprising that Austin, known for being the headquarters for corporate tech giants, ranks #2 for technology, edged out only by San Francisco at #1. Regardless of sector, Austin is an incredible city for women-led startups, with dozens of opportunities to help women succeed. One of those opportunities is being lead by Kendra Scott, the eponymous jewelry company founded and headquartered in Austin. In partnership with the University of Texas at Austin, Kendra Scott will launch the Women’s Entrepreneurial Leadership Institute this coming spring.

In advance of the launch, the Institute has been holding events across the city to help women at all levels of their entrepreneurial journey. I attended their second event in late October and talked with Jan Ryan, Executive Director of Creative Entrepreneurship and Innovation at the University of Texas’s College of Fine Arts and Liz Matthews, Senior Vice President of Global Brand at Dell Technologies. Both Ryan and Matthews have decades of experience in supporting hundreds of women entrepreneurs and women leaders develop robust entrepreneurial skills.

Matthews, who was a key driver of the Dell Women’s Entrepreneur Network for a number of years, reinforced why this sort of analysis needs to be made. “[Dell Technologies] got involved with building the ranking because we knew we needed to shine a light on the gaps that female entrepreneurs run into around access to capital, access to networks, and particularly access to critical technology.” Examining the advances or roadblocks for women gives insight for structural and regional trends, such as those highlighted in the report. At the same time, Matthews emphasized that women business owners have to find ways to build their own inner resiliency. While the gaps inch towards closure, Matthews suggested that developing an entrepreneurial mindset can boost success whether you’re running a businesses or delivering value inside of one.

It’s also vital to know your worth, as an individual and as a company. Ryan, who teaches classes at the University of Texas about women-led companies, said that her key advice for women owners is to have a very clear idea of your value. “If you are a careerist working for a company or an entrepreneur running it, you have to know your worth,” Ryan advised. Without having a clear sense of that worth, she said, you can’t do the vital research necessary to determine market value.

Ryan and Matthews also underscored the importance of developing a collaborative approach to work. Both women agreed that collaboration with a focus on promoting good ideas is a crucial element to adopting an entrepreneurial mindset. Matthews mentioned being brave around releasing a sense of ownership over ideas. “I’ve had success where I’m not afraid to give up that idea to someone else for the good of the brand or the good of the company. I was fearless because success will arrive for me when we bring people along on that journey.” That generosity extends as well to finding ways to fund great ideas, because working in collaboration can generate trust in a group. Ryan agreed. “You find out very quickly is that innovation is a team sport,” Ryan said.

What was also interesting was what both experts mentioned as the biggest hurdle for any entrepreneur, regardless of gender. That hurdle is the ability to delegate. “You can’t try to do it all yourself,” Ryan cautioned. “Great entrepreneurs know the deep value of team building, even before you have money to hire people.” Ryan emphasized again that businesses flourish when leaders can cultivate relationships of trust that encourage others to support a common vision.

Without that “superpower” of cooperation, a business might even be headed for failure. “It’s actually a detractor for people when you’re trying to do it all yourself,” said Matthews. She mentioned that while hard-driving entrepreneurs might want to be highly self sufficient, a lack of collaboration or delegation can be a deeply demotivating force. “That’s a real turning point that I’ve seen new managers and owners adjust to. You have got to let go and delegate. And guess what? Your team is going to be happier when you do.”