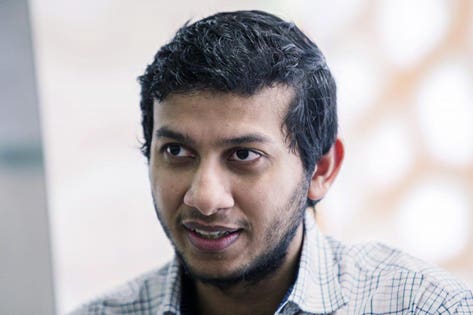 Serebral360° found a great read by Forbes – Entrepreneurs article, “India’s Startups Are Venturing Abroad To Gain Footholds In Countries Around The World.”

Ritesh Agarwal is the founder and CEO of Oyo Hotels and Homes. (Photo: Prashanth Vishwanathan/Bloomberg)

After restricting themselves to focusing on the demands of hundreds of millions of consumers within their domestic market, many of India’s startups have begun venturing abroad to try their luck in a variety of markets across the world. While only a few of these enterprises have attained unicorn status before venturing overseas, there are still others with valuations well below $1 billion that are making their presence felt in places like Australia, China, Great Britain, the U.S. and Southeast Asia.

Billed as the next-generation hotel chain, Oyo Hotels and Homes has said that it intends to put the majority of the $800 million in funding that it raised in September for expansion in overseas markets. The company’s latest fundraising was completed at a valuation of $5 billion, which makes it India’s third most valuable startup, according to CB Insights.

“We, at Oyo, have developed our business from the ground up in a market like India, which we firmly believe is one of the toughest markets to crack given the emphasis on high quality at low prices and the nuances that vary from city to city,” said Oyo’s Chief Strategy Officer Maninder Gulati. “Much effort that has gone into competency building…this has helped us to not just meet the demand-supply gap in the highly fragmented hospitality segments…but also empower small hoteliers with the technology and know-how to compete with bigger chains.”

Oyo says that it will continue to make India its priority market, while also looking for other locations characterized by similar demand-supply imbalances. The Gurugram-based company claims that it currently hosts guests in over 400,000 rooms spread across 12,000 franchised and leased hotels and more than 3,000 homes. The hotel chain has grown rapidly to become South Asia’s largest with a presence in over 500 cities across India, China, Malaysia, Indonesia, Nepal, Great Britain and the U.A.E.

Another Indian unicorn with overseas ambitions is Ola Cabs, which has taken the decision to expand its business in Australia, where its ride-hailing rival Uber is already well established. Last January, Ola launched operations in Perth, and then expanded those services to customers in Sydney, Melbourne, Brisbane, the Gold Coast and Canberra. Investors have backed the Bangalore-based startup with an almost $7 billion valuation in an earlier funding round that included Chinese internet giant Tencent and Japan’s SoftBank

Meanwhile, startups with far lower valuations are also heading to a variety of different markets abroad comparatively early in their growth curve. Even though they have yet to attain a size that’s anywhere close to their attention-grabbing peers, startups like restaurant chain Burger Singh, SaaS startup Synup and programming platform HackerEarth are still reaping the rewards from their ventures into foreign lands.

HackerEarth has said that its revenues from international markets have more than tripled to constitute one-third of its total sales within the past 6 years. The Bengaluru-based company is intending to grow it business aggressively in the U.S. over the next 12 months.

Synup’s founder and CEO Ashwin Ramesh said his firm is currently serving over 150,000 businesses in North America.  “Even though we were founded in India, we always believed that we had to be truly global,” he said. “Being in India didn’t prevent us from winning business, and we in fact, scaled to millions of dollars in revenue without adding any global headcount.”

The ability to expand abroad without raising staffing levels has been at least partly possible due to the proliferation of online communication tools that have lowered the operating costs of entering overseas markets. Executives are able to reach out to potential customers via instant messaging, email, phone or video chat to virtually sell their products and services, to conduct demos and try out minimum viable products (MVP’s). Meanwhile, air travel’s costs have also come down as connectivity between countries has improved, enabling executives to travel more easily, build relationships and sign new deals.

“As the world moves to cloud computing, customers are comfortable evaluating and purchasing new products over the internet,” said Sanjay Swamy, managing partner of Prime Venture Partners. “This creates opportunities for several companies from India to launch products globally, and to support and serve customers from India. In many cases, companies use India as a proving ground, and then rapidly expand internationally, and we expect this trend to grow in coming years.”

Sales cycles in India tend to be longer, and profit margins are often lower per customer. Selling products and services in a market often characterized by poor infrastructure, unreliable power supplies and unpredictable regulatory policies, India’s entrepreneurs may even find that expanding their businesses in markets abroad can be less problematic by comparison.

Nowadays, Indian startups are also being backed by investors who prefer to finance fledgling enterprises that have diversified their revenue streams across multiple countries, rather than just catering to the domestic market.

To be sure, expanding overseas always involves varying degrees of risk, too. As Kabir Jeet Singh, the cofounder and CEO of Burger Singh, points out, “spreading a small business too thin could impact its cash flow and hurt a company. It should be done at an opportune time, as international expansion demands a lot of resources for branding and meeting tough market regulations, especially in the EU.”

While keeping one eye on the expansion into a new market, the startups also have to maintain their focus on protecting their market share in India. As they continue to grow and gain more attention, they can become vulnerable to attacks on their home turf, as Oyo has discovered. The chain was recently hit by protests organized by the Federation of Hotel and Restaurant Associations of India. The trade group has alleged that Oyo had been breaching contracts; putting customers at risk and charging exorbitant commissions. Oyo refuted the allegations, calling them “misguided and misplaced.”