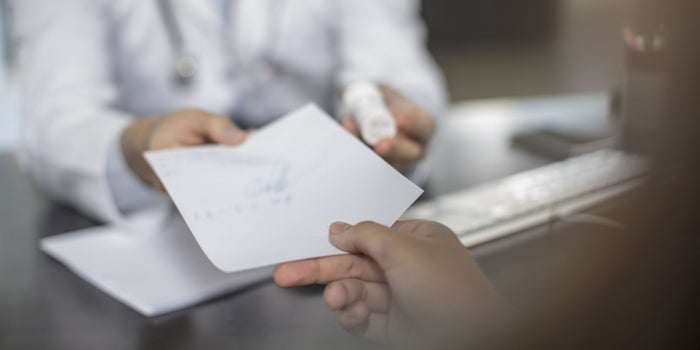 A new study has found that when officials in Italy accidentally legalized so-called light cannabis products in 2016, the unintended action led to an unforeseen trend: people started using light cannabis for medication.

Along the way, they also stopped using as many pharmaceuticals.

A new study from researchers at York University in the United Kingdom found that the drop in pharmaceutical sales was significant. They reported that in areas where light cannabis was available for purchase, sales of anxiolytics fell by 11.5 percent, sedatives fell by 10 percent and antipsychotics fell by 4.8 percent.

Related: Farmers to FDA: Only CBD From American-Grown Hemp Is Legal

Light cannabis is a product derived from hemp. It is sometimes called a “low-THC” product because it typically contains less than 0.2 percent of THC, the chemical component in marijuana that causes the high.

That’s very similar to the amounts typically found in CBD products, which are now available across the United States after Congress legalized the sale of hemp products last year. Some in the U.S. have voiced hopes that CBD products could replace pharmaceuticals in certain areas, such as managing pain.

People in Italy apparently have the same hopes, based on their purchasing patterns once light cannabis hit the market.

Light cannabis became available in Italy only after an accident by lawmakers (some might call it ineptitude). By not considering all the implications of a new law expanding the legality of hemp, Italian officials inadvertently made light cannabis, or C-light, legal to purchase.

That meant that even kids could buy the low-THC product, even though they can’t buy tobacco. Further, it’s illegal to eat or smoke cannabis in Italy.

One of the unintended consequences is that the Italian Mafia began losing out on money from the sale of black market drugs. One estimate put organized crime’s loses at about 160 to 200 million Euros per year.

The change also has the potential to raise more money through taxes for Italy, which has never really recovered from the 2008 recession and has an economy that continues to drag on the European Union.

The other unintended consequence is that pharmaceutical sales took a hit. Researchers called the trend of people buying light cannabis for medical purposes “Do It Yourself Medicine.” They looked at statistics on monthly drug sales in parts of Italy where light cannabis was also available.

They found a drop in sales for:

They noted that these sales decreased as people bought light cannabis even though “patient response to new drugs and therapies is usually heterogeneous and sluggish because of typical risk aversion.” That does not appear to be the case when it comes to light cannabis in Italy.

Also, researchers noted that the way the product became available in Italy suggests people were not buying low-THC products based on doctor’s advice.

Italian consumers had an interest in a product that was accidentally legal and likely not recommended, but they bought it, anyway. The York University study is likely to be just the first among many that investigates this growing trend involving CBD products and light cannabis.

Related: Why the Trend of Going Public in Canada May be Ending

Related:
Italians are Choosing ‘Light Cannabis’ Over Prescription Medications
She Is the Cannabis Industry’s Voice of Reason
There’s Hope for Cannabis-Based Alzheimer’s Treatments