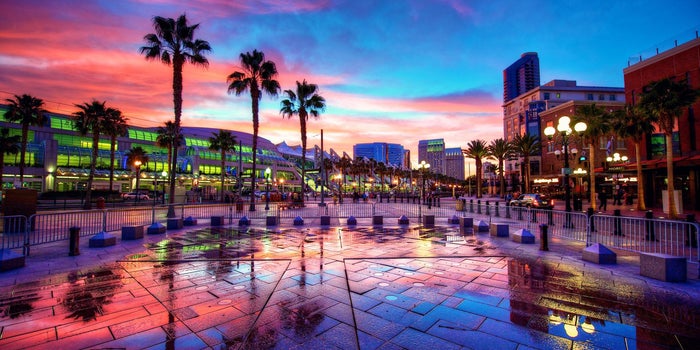 Every city has a chip on its shoulder. Most of them have a comparison ready. It’s not a bad thing. It’s healthy competition. Houston will tell you it’s bigger than Chicago now. Most Midwest cities will compare themselves favorably to Silicon Valley based on cost of living.

But there’s one city, San Diego, that honestly doesn’t care where it ranks. My entire time there this spring I didn’t hear a word about other cities or where San Diego ranked among them. It’s the eighth largest city in the country but acts and feels more like any city in the Midwest in one way — access.

As a city of transplants, it’s welcoming — like the Midwest but with its own different vibe. People move out here for good weather, great views and a happy lifestyle. But that shouldn’t be confused with a slower pace.

If Reno is the biggest little city, San Diego is the smallest big city in America.

And that’s a compliment. San Diego has the amenities of a top ten city. They are moving faster than up-and-coming cities like Nashville on light rail. They have access to major capital both domestically and internationally. Most cities struggle to even find captial in their own community.

In fact, if San Diego existed in the middle of the country it would get more buzz than great cities like Nashville, Denver and Charlotte combined. But standing out is a different challenge when you share a state with Los Angeles, San Francisco and Silicon Valley.

The greatest appeal to San Diego is that you can become a local in six months. Mark Cafferty, who grew up in Boston, is president of the San Diego Regional EDC and he can explain it in one paragraph.

"It feels big enough to make an impact, yet small enough to get things done. In San Diego, companies that might normally be viewed as competitors are more likely to collaborate. There’s a welcoming vibe in the air here. It doesn’t matter who your grandfather is or what neighborhood you grew up in — everyone has an opportunity to contribute," he said.

There’s also a great Thrillist article on how to quickly become a true San Diegan. The biggest point is don’t quote Anchorman. Just like milk on a warm day, that’s a bad choice.

But that’s the setup. When you’re looking to start a business a lot of things come into play. San Diego isn’t the cheapest city. When you have coastal views of an ocean, great weather every day, Balboa Park and a bunch of fun neighborhoods like Hillcrest, North Park and Little Italy, then it’s going to be costly.

Related: Rapid Startup Growth in These 4 Cities Has Led to Big Changes in Commercial Real Estate

San Diego has a longer "runway" than you think

As entrepreneurs we don’t choose locations based on amenities. They help but they don’t sway. You look to see if there’s a support system for you, who is already succeeding and how you can carve out a space there.

In corporate settings we talk a lot about work/life balance. It’s important. For entrepreneurs I look for access/opportunity balance. Silicon Valley and Boston have plenty of opportunities but accessing them becomes increasignly more difficult. On the opposite end of the spectrum there are plenty of great cities that will offer you all kinds of access but it will take you a much longer time to get noticed.

And that’s where a term I use called "runway" comes in to play. Runway is the length of time you can stay in business and not be profitable somewhere. This is key for entrepreneurs because we all fail at first. The cheaper a place is, the longer the runway.

After two years of research I have amended this idea. If you can’t find funding it doesn’t matter if your runway is three years, it won’t work. Once you get over the initial sticker shock of livability in San Diego, you’ll realize it’s the cheapest place in the country with major access to capital. Your runway may only be a year but you’ll have the access and opportunities to find funding in that time.

Related: These Are the 3 Things That Make or Break a Startup City

Where San Diego has already succeeded.

If you look at the successful companies in San Diego there is a general theme, although that doesn’t limit any business from succeding there.

Companies like Qualcomm, which is building the next generation of 5G, or Illumina, which is leading the way toward sequencing an individual’s genome for under $100, have long anchored their work in San Diego. Recent startups, such as LunaDNA, which is democratizing health data at an important time, or Aira, which is redefining what independence means for the blind and low-vision community, are creating a newer generation of life changing products and companies as well.  And while these companies all focus on solving different problems, they are united in their desire to make the world a better place.

Brain Corp, also located in San Diego, wants to become the industry standard for anyone who wants to build a robot. They’ve expanded partnerships with Walmart and rolled out AutoDelivery — a proof of concept delivery robot powered by BrainOS – designed to capture the delivery space, particularly in retail environments.

But if you really want to know what it’s like to build something in San Diego, beyond what you can read about or see in the numbers, LunaDNA President Dawn Barry defines the startup ecosystem in San Diego best.

"We reward vision, social responsibility, and balance here, versus churn and burn badges of honor for hours worked or sleep missed," said Barry. "Growing a company is mentally and physically challenging, but it’s productivity, not activity, that really counts. San Diego is demonstrating that we can reproducibly execute life-changing ideas when individuals invest bigger than themselves and for longer than today."

As always you can’t start somewhere without the right people to know. Here are three who can be immensely helpful on your journey.

1. Jarrod Russell, Executive Director of Startup San Diego, is where to start. I shared a burrito and conversation with Jarrod about the city as a whole on my first day there. One of the most genuine human beings I have ever met and it shows in his passion to help businesses and people find their way.

2. Sarah Lubeck, Director of Marketing and Communications for SDEDC, is a straight shooter raised in Philly who can connect you to anyone you need to know. Plus she has appeared on the Tacos and Tech Podcast.

3. Dawn Barry, President of LunaDNA, is doing major things when it comes to transparency around health data but will stay take time to respond to an email almost immediately or get a coffee. She backs up her earlier quote and then some and she’s a must-know in the region.

Related:
It’s Time to Take San Diego Seriously as a Startup Destination
Feeling Like Your Balance Is Out of Whack? The Problem Could Be Your City
16 High-Tech Cities You’ll Want to Call Home