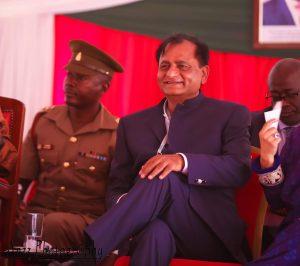 The deal will see Raval’s National Cement Company acquire all cement and non-cement assets and business of Athi River Mining, which is currently under administration.

“This transaction is in line with National Cement’s growth strategy in Kenya to position itself as the leading cement manufacturer in the region. The industry is poised for growth and we are excited about the prospects for this next chapter of our business. We will endeavor to safeguard the interests of all stakeholders including the employees, customers, and suppliers in the overall interest of Kenya,” Narendra Raval said in a press statement.

ARM Cement, which was once Kenya’s second-largest cement maker behind LafargeHolcim’s Bamburi Cement, was put under administration last August by some of its creditors over a $190 million debt and its shares were suspended from the Nairobi bourse. It has debts with a range of creditors, including local commercial banks. ARM Cement, which was previously controlled by the wealthy wealthy Paunrana family, started crumbling over heavy debt after an investment in its Tanzanian business failed to generate a return in the face of stiff competition from Dangote Cement’s and Heilderberg’s Tanzania Portland Cement Company.

Raval told this reporter that his company plans to invest $36 million to modernize the production plants it is acquiring. The transaction, which applies to ARM Cement’s Kenyan assets only, is subject to regulatory approvals.

Raval, 57, an Asian-Kenyan tycoon who made his initial fortune in the steel industry, has been expanding his cement empire over the last two years. Last year, his Devki Group, which owns National Cement Company (NCC), launched a $280 Million Clinker Plant in Merrueshi/Mbirikani in Kajiado County, 80 km south of Nairobi. NCC is currently constructing two new cement factories in the country. The acquisition of ARM’s plants will initially increase National Cement’s 1 million tonne annual capacity by 400,000 tonnes.