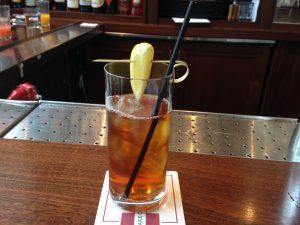 Paper straws, like this one at Union Square Cafe in Manhattan, will be seen more often in 2019.Micheline Maynard

The restaurant world is in turmoil. Will customers eat out — or will they cook at home? Do they want clean food, or indulgent meals? What role will food television play?

This past year, I’ve dined out, prepared my own meals and talked with a number of industry figures. Trends can come from anywhere, so I’ve compiled a set of predictions for the year ahead.

Sustainability. You could call 2018 the year of the vanishing straw. Restaurants and fast food chains around the world begin eliminating single-use plastics, as awareness of plastic pollution in sea and on land spread among the dining public.

In 2019, you can expect more restaurants to make straws available only upon request, and others to stop giving them out completely. You can also expect to see this trend even in high-end establishments, as a much-discussed tweet from Fox News political columnist Harlan Hill revealed.

In the Dec. 6 tweet, which he later deleted, Hill complained, “Enjoying a $25 gin and tonic at the Four Seasons. Too bad my PAPER straw is melting. Liberalism is a disease.”

Sustainability isn’t only for utensils and take-away boxes, though. It’s also a feature of how restaurant foods are developed. This past year, White Castle raised eyebrows in surprise when it added a plant-based burger to its slider lineup.

I tried it, and found it had much the same texture and taste as a meat-derived burger.

Likewise, CauliPower pizza, with its cauliflower-based crust, became a phenomenon in grocery stores, with one pizza sold every three seconds.

You can expect more plant-based foods to pop up across the spectrum, as diners demand more responsible foods and restaurants feel the the influence of vegans, vegetarians and those who’ve cut back on meat.

Chefs going casual.  For a number of years, big name chefs have expanded from sit-down restaurant into more casual dining, whether in cities or in airports.

Think California’s Wolfgang Puck, Chicago’s Rick Bayless and even the late French master Joel Robuchon, who transformed his image with a less-haute approach.

Now, some additional names are joining the group.

A standout example is in New Orleans, where Ti Adelaide Martin of the legendary Brennan family, and Tory McPhail, the co-owner and chef respectively of Commander’s Palace, have joined forces to open Picnic Provisions and Whiskey.

They originally intended to focus on food delivery to nearby parks and homes.

But Picnic Provisions has become a popular hang out in the Uptown neighborhood, where diners clamor for its Crawfish Boil Hot Fried Chicken, prepared using the same spices used to boil crawfish.

In Boston, James Beard Award winning chef Jody Adams is opening a branch of her fast-casual restaurant, Saloniki, in Logan International Airport. That’s in addition to two Saloniki locations in Cambridge, Mass., and one near Fenway Park in Boston.

Want to know about more? QSR Magazine has a list of 40 fast casual start ups here.

Switching cities. Some chefs prefer to stick with a single city and expand in a place they know well. But in 2019, you’ll see more chefs spreading their wings in unknown territory.

Chicago has landed the first stand-alone restaurant from Zachary Engel, formerly the culinary director for the Pomegranate Hospitality Group in New Orleans.

Before that, Engel was chef de cuisine at Shaya, the Israeli restaurant from Alon Shaya that was named the 2016 winner of the James Beard Award as the country’s best new restaurant.

Engel, who was among FORBES’ 30 Under 30 honorees in 2017, and was also named the country’s Rising Star chef by the Beard Awards, will be serving Israeli inspired dishes at his new restaurant Galit, located in Lincoln Park.

Meanwhile, his former boss is getting up to speed with his new restaurants. This year, Alon Shaya opened Saba in New Orleans, and Safta in Denver. Both have won accolades as their cities’ best new places.

Another city switcher is Stephanie Izard, who was the first female winner of Bravo’s Top Chef in 2008. She has built a collection of restaurants in Chicago, led by her flagship, Girl and the Goat.

Next summer, she’ll open a branch of Girl and the Goat in the Los Angeles art district, her first restaurant outside the Windy City.

Limited time only. They’re known as pop ups in the retail world, temporary places that show up in unused spaces. But pop ups are becoming increasingly popular in the restaurant world, too, and some big names are embracing the idea.

They include Izard, who aims to stretch her culinary wings She’s planning to launch the Tiny Goat, a twice-a-month restaurant in the banquet room at her Chicago diner, the Little Goat.

Tiny Goat will feature dishes designed by Izard and the teams from her three restaurants. She told the Chicago Tribune she’s been eating out lately to get ideas for the venture.

Keep your eyes open for opportunities to sample some new dishes. And act fast. Izard’s New Year’s Eve dinner sold out almost instantly as soon as it was announced.

GQ Magazine calls pop up restaurants the successor to the food truck trend, although I’d argue that food halls deserve that designation.

Tiki takes root. Most big cities have at least one tiki bar, where drinkers can order elaborate cocktails that their parents might have sipped during mid-century trips to Hawaii.

You’d be excused for thinking that Tiki’s fifteen minutes are up. But Mat Snapp, beverage director for Fox Restaurant Concepts, believes Tiki is moving beyond fad status.

“Tiki is around for two or three more years, too. I’m happy about that. It’s a fun one,” he says.

Snapp believes Tiki is a boon to restaurants because it has to be experienced in person. “You can’t have someone come to your house in a Don Ho shirt and make you a Mai Tai and leave,” he says.

With the world in so much turmoil, Tiki drinks provide the kind of lighthearted atmosphere that allows drinkers to escape, he says. And Tiki drinks can be made with non-alcoholic ingredients, which Snapp believes are an important 2019 trend.

A little bit of Tiki is “allowing people who have kids to be kids again,” Snapp says. So, don’t put away your straw hat just yet.