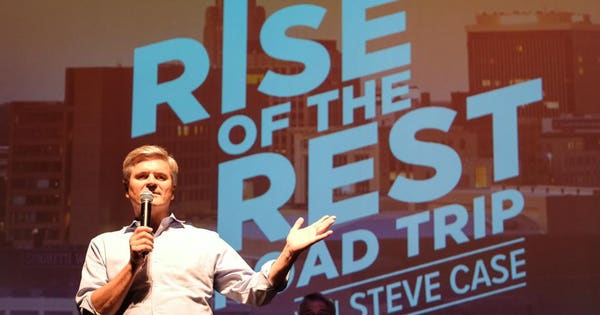 Serebral360° found a great read by Forbes – Entrepreneurs article, “Massive Startup Growth In The 2020s Will Be In Middle America — Not Silicon Valley.”

Steve Case talks to a packed house during the “Rise of the Rest” Tour,

Silicon Valley is synonymous with startup success. For the past three decades, money, resources and talent flocked to San Jose, San Francisco and the surrounding valley, making it a veritable haven for new companies. Unfortunately, this success has come with a cost. It created a large divide between the “haves” and the “have nots” in the region. As the cost of living grew sky high, the number of people who could comfortably afford to live in the valley shrunk. Poverty and hours long commutes became the reality for the majority.

This divide is a microcosm of what is happening across the United States. Talent, jobs and money for startups have converged in the “Big Three:” California, New York and Massachusetts, while people living in smaller cities and rural areas get left behind.

This unbalance has created great division in the country. Many people in the middle of the U.S. (and the broader North America) have watched their jobs leave and their towns struggle while the big cities on the two coasts become richer and more exclusive. They beg for help from politicians and big companies, but feel left out by policies that support big cities and established companies. It’s as though the American Dream has become conditional. If nothing happens to spread the wealth and jobs across the nation, this “Dream” may become a thing of the past altogether.

The good news is that the 2020s are shaping up to be a period of hope for Middle America—especially when it comes to startups and technology. New technology and startup hubs are emerging beyond the Big Three, including in Atlanta and Toronto.

Atlanta is one of the top “rising stars” for startups in the U.S. The energy of its burgeoning startup scene has spilled out to other areas of the state, including Columbus and Savannah. An ecosystem of universities, incubators and major companies has spread jobs and talent beyond the heart of the city. ATDC and the Atlanta Tech Village, along with new startup centers TechSquare Labs, WeWork and Techstars, support the creation of early stage companies and help them grow. Georgia Tech, meanwhile, cranks out talent to fill jobs.

Similarly, both Toronto and the greater province of Ontario have become startup magnets. Some 49 incubators and accelerators are spread throughout the region and the Canadian government’s support of new companies has attracted big names, including Google, FaceBook and Microsoft. With big companies come strong talent and money—providing a boon for companies just getting started in the area. The presence of the University of Toronto further bolsters the growth of new companies north of the border.

Still, Toronto and Atlanta are bigger cities. What can be done with smaller cities and rural areas? That’s a question Steve Case, who co-founded America Online, is trying to answer. He and a team of investors, operators and business builders launched a venture firm called Revolution to invest in disruptive, innovative companies that are not based in California, New York or Massachusetts. The company has a seed fund called “Rise of the Rest” that only invests in companies outside of Silicon Valley.

The Revolution team actually travels across the U.S. in a bus looking for promising companies in industries that have long established ties to Middle America, including food, transportation and agriculture. So far, Case and his team have traveled in a bus to 38 cities and 26 states. They are leading the charge on supporting amazing companies that might otherwise be ignored simply because of where they were founded.

Case isn’t the only one looking outside the Silicon Valley for new companies and entrepreneurs to invest in. Deepak Sindwani, co-founder of Wavecrest Growth Partners, and his partner, Vaibhav Nalwaya, are investing in capital-efficient B2B technology entrepreneurs across the U.S. Their fund invests between $7 million to $30 million in each company they work with.

Sindwani , who started his investing career 16 years ago with Comcast Ventures and then moved on to Bain Capital, looks at the situation very simply from a supply and demand perspective – he focuses on markets with plentiful software engineers, attractive costs of living, and little to no capital providers. The good news is that numerous universities across the country are producing great software engineers. So, talent can be found in every state. The other good news is that cloud providers, such as AWS and Microsoft Azure, have reduced the costs and simplified the process of building software in the cloud, allowing companies to develop products virtually anywhere.

Sindwani believes, outside of Toronto and Atlanta, some great non-Valley startup cities include Durham, Pittsburgh, Dallas, and Chicago.

All of this is great news, but it does beg the question: what happens to Silicon Valley in 2020? I believe Silicon Valley will continue to be the place for major innovation, but with bigger dollars going to fewer companies, the landscape will change. Talent who remain in the valley will constantly be on the “look out” for the next big deal and will switch jobs with an hour’s notice. Smaller companies will struggle and many will never get a call back from the VCs they are trying to impress. In short, life in the Valley will continue, but it will get harder.

Between the lack of opportunities for mass growth in the Silicon Valley and a growing number of disruptive entrepreneurs elsewhere, money will follow good ideas in the 2020s. More and more VCs will take a cue from Case and Sindwami and take their dollars across the country. This isn’t just a vision. It is vital to the U.S. that we find away to support the people who feel forgotten across the majority of the country. Entrepreneurs in Middle America aren’t just coming up with ideas to help their states or cities, they are developing technologies and products that will revolutionize the world. That is how unicorns are born.