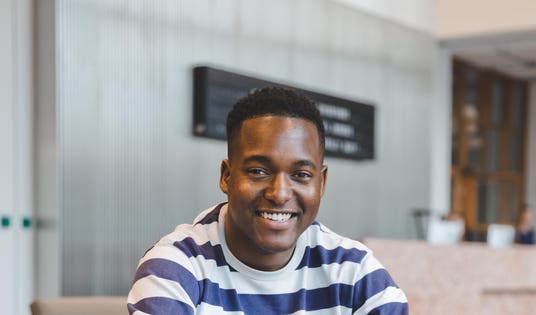 Today I met with Bejay Mulenga, an impressive 24-year-old serial entrepreneur, who has already celebrated a decade of establishing businesses across industries – such as recruitment, marketing and media production -  and with his latest venture SupaNetwork, has provided services to some of the world’s most influential brands, including Apple and Facebook. He works with such companies to offer key advice on how they can best connect, recruit and understand the next generation of young people.

Bejay’s journey started in secondary school when aged 12 he organized his own talent show. Although it may seem childish, as a young teenager Bejay began nurturing a valuable skill – the ability to utilize whatever resources he has available to pull a project together. Bejay managed a variety of tasks such as recruiting (good) performers, finding and booking a venue at the right price, marketing the event and working out the finances to make the event worthwhile and, hopefully, profitable. Bejay’s own talent for event management meant that the talent show a sold-out success and was the first step in his entrepreneurial journey.

Bejay’s next venture involved opening and running a small tuck shop whilst at secondary school, which soon began generating a comfortable profit. A Business Studies student at the time, Bejay considered the course to be highly theoretical and found that he was acquiring more practical business knowledge through his entrepreneurial efforts. Around the same time, he became familiar with the concept of franchising – a business expansion strategy involving an arrangement where a business owner grants another party (a franchisee) the right to trade under its licensed business name in exchange for a flat fee and/or a cut of the profits. Bejay was fascinated with the potential this presented for his business to grow, by opening his brand of tuck shop across a number of schools in the area. In addition, he wanted to offer students like himself a practical education of the fundamentals of business. He registered his business under the name ‘Supa Tuck’ in 2012.

Eager to market his business idea, Bejay organised speaking engagements at a number of schools around the country, sharing his tips on how students could turn their grades around, as he had done himself by transforming from an average pupil to an A* student. During these talks, he would also share his business idea and presented it as an opportunity for students to develop entrepreneurial skills. By the time he was finished, many of the schools were eager to have a shop set up for their students. Within four years, Bejay had worked with over 5,000 students and had even been invited to Downing Street to meet Lord Young, Enterprise Advisor to former Prime Minister David Cameron. “As a young black boy from London, I never envisioned being invited to Downing Street” he calls. Pursuing his business idea as a young teen had made the seemingly impossible possible, and the cliche “hard work pays off” became his reality. The invitation to Downing Street was followed by a speech delivered at the Conservative Party conference, at just 19 years of age.

Around this time, some of Bejay’s peers who had either entered university or recently left school, were struggling to find full or part-time work. He reflected on the skills he had developed whilst running his tuck shop business and figured that he could share the information, support and expertise with others. He set up the ‘Supa Tuck Academy’ to do just that, and in 2015 arranged a pop-up market operated by teenagers at the Truman Brewery in Shoreditch, East London. The pop-up worked as a mini department store, where several young entrepreneurs pitched and sold a variety of products. The pop-up had over 10,000 customers, and in 2016 his efforts were recognised by the Queen of England when, at 21, he was the youngest recipient of the Queen’s Award for Enterprise.

The feeling of having his success recognised in such a way was surreal and fuelled Bejay’s enthusiasm to seek new business opportunities. The Supa Tuck Academy pop-up was focused on retail products, for which demand is highly seasonal; in his case busy during the summer months and less so in the winter. In addition, during 2016, the influencer industry was picking up pace and Bejay noticed that some of his peers had been capitalizing on this new area and working with prominent retail brands. Many of the influencers were either teens or in their early 20’s and Bejay spotted a gap in the market, where some influencers were unable to obtain fair payment terms. Bejay saw that he was both well equipped to negotiate with established brands and able to relate to influencers in a similar age group. Thus, Bejay set up his own marketing agency called ‘Filli Studios’. The company has now worked with some of the best-known influencers in the UK. Still desiring to help young people gain business experience, and even set up their own, he founded his next business, SupaNetwork.

SupaNetwork has worked with global powerhouses including Facebook, The Office Group and the government’s Cabinet Office. A highlight for the business was an incubator program set up by SupaNetwork along with The Office Group, to support 30 small businesses and 80 entrepreneurs with free office space, workshops and mentorship.

As we wrap up our conversation, I ask Bejay what he’s looking to do next, and he describes how the last 10 years have been setting him up for the next 20, and that he is excited to build on his legacy. He feels fortunate to work on something he loves and believes in, and intends to expand SupaNetwork into other high-growth regions across the UK, such as Milton Keynes and Manchester. He anticipates that he will be able to reach thousands of people across the country in the coming years and I have every confidence he’ll be successful in doing so.