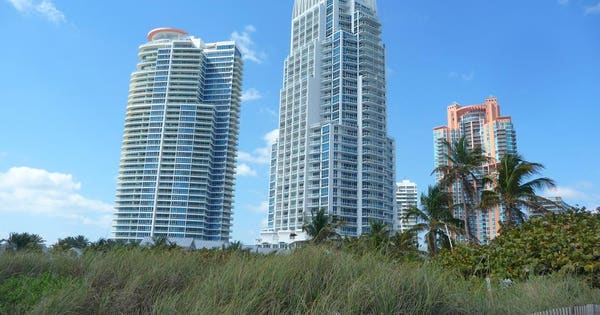 Behind every big time developer, there is an accountant struggling to keep up with him. For Homero Meruelo, whose projects include the Akoya Condominiums, one of the tallest buildings in Miami Beach, it was Luis Carreras.  Mr. Carreras prepared returns for Mr. Meruelo, and a number of affiliated companies that tended to have Merco as part of their name.

Merco of the Palm Beaches Inc (It may actually be Merco Group of the Palm Beaches, Inc) is the one we need to worry about.  The loss from that Merco had Mr. Meruelo and the IRS in Tax Court differing about tax liability for 2005 in the amount of $2,600,275.

The challenge that an accountant faces in dealing with developers who have multiple projects, with multiple entities with different ownership is that the money does not always flow the way it should.  Bills have to be paid when they have to be paid and the tendency is to use whatever cash is available.

I remember one time in my youth listening to an old time property manager in the affordable housing business.  He told me that it was better in the old days before all of us annoying auditors were around, when the strong projects could help out the weaker projects.

During 2004-2008 Merco entered into hundreds of transactions with various partnerships, S corporations, and LLCs in which petitioner held an interest (collectively, Merco affiliates). Merco affiliates regularly paid expenses (such as payroll costs) on each other’s or on Merco’s behalf to simplify accounting and enhance liquidity. The payor company recorded these payments on behalf of its affiliates as accounts receivable, and the payee company recorded such items as accounts payable.  During 2004-2008 Merco affiliates made payments in excess of $15 million to or on behalf of Merco. Merco repaid its affiliates less than $6 million of these advances. On December 31 of each year, Merco’s books and records showed substantial net accounts payable to its affiliates. (Emphasis added)

Having entities pay one another’s bills probably does enhance liquidity in a way.  It does not, however, simplify accounting.  It tends to make accounting a nightmare.  The practice was also the source of Mr. Meruelo’s tax problem  The IRS was disallowing his losses for lack of basis.

It appears that the efforts of Mr. Carreras in tracking basis were heroic.

When preparing Merco’s tax return for a given year, Mr. Carreras would net Merco’s accounts payable to its affiliates, as shown on Merco’s books as of the preceding December 31, against Merco’s accounts receivable from its affiliates. If Merco had net accounts payable as of that date, Mr. Carreras reported that amount as a “shareholder loan” on Merco’s tax re-turn and allocated a percentage of this supposed indebtedness to petitioner, on the basis of petitioner’s ownership interests in the various affiliates that had extended credit to Merco.  (Emphasis added)

You see that “supposed”.  That is when you know that things are not going to go well for the taxpayer.  It is not quite as harsh as “purported”, but harsh enough.

Regardless, Mr. Carreras put a great deal of effort into establishing Mr. Meruelo’s basis, which, of course, includes the corporation’s indebtedness to him.  Let’s look at that supposed indebtedness again.

If Merco had net accounts payable as of that date, Mr. Carreras reported that amount as a “shareholder loan” on Merco’s tax re-turn and allocated a percentage of this supposed indebtedness to petitioner, on the basis of petitioner’s ownership interests in the various affiliates that had extended credit to Merco.

I can picture the schedule that must have been prepared (If this were any court but the Tax Court, I might be able to look at a copy of it, but that’s a story for another day).  A lot of effort might have gone into it.  And it might even have impressed a Revenue Agent, who like Mr. Carreras was likely educated as an accountant.

Judge Lauber, according to this profile by Jacob Dean, studied Greek and Latin in high school, was an English major at Yale and before going back to Yale for law school, studied at Clare College at Cambridge University (more Latin and Greek).

In an effort to show indebtedness from Merco to petitioner, Mr. Carreras drafted a promissory note dated March 31, 2004, whereby petitioner made available to Merco a $10 million unsecured line of credit at a 6% interest rate. Mr. Carreras testified that, at the time he prepared petitioner’s and Merco’s tax returns for 2004-2008, he would make an annual charge to Merco’s line of credit for an amount equal to petitioner’s calculated share of Merco’s net accounts payable to its affiliates for the preceding year.

But not far enough:

All that accounting work did get into the record.

Respondent agrees that petitioner is entitled to basis of $4,985,035 in Mer-co, corresponding to funds that petitioner personally borrowed from CNB and con-tributed to Merco through Akoya in March 2004. Petitioner contends that he has substantial additional basis in Merco by virtue of inter-company transfers between Merco and its affiliates. At trial the parties introduced testimony, bank records, other documentary evidence, and spreadsheets in an effort to quantify the pay-ments (and petitioner’s allocable share of the payments) that Merco affiliates made to or on behalf of Merco during 2004-2008. We find that petitioner’s allocable share of these payments was $13,326,982 ….

That did not get him them where they needed to be.

There is simply no evidence that Merco and its affiliates, when booking these transactions, intended to create loans to or from petitioner.  Mr. Carreras’ adjustments to a notional line of credit, uniformly made after the close of each relevant tax year, do not suffice to create indebtedness to petitioner where none in fact existed.

There is a pretty lengthy explanation of how taxpayers are bound by the form of transactions that they choose.  The theory supporting Mr. Meruelo’s basis was that when some other company that he owned say 30% of paid Merco’s payroll for it and recorded the transaction as “due from” with Merco recording payroll and a “due to”, it was as if that company loaned 30% of the payroll to Meruelo who then loaned that much to Merco.

If you think in double entry, it makes a lot of sense.  Faced with Mr. Meruelo’s issues I probably would have taken an approach like that.  What was the alternative?  But it is not a winning approach in Tax Court.  Accountants tend to think that their journal entries magically transform what hit the books.  Often journal entries only impress other accountants.  To judges they create “supposed indebtedness” and “purported transactions” .

Being an accountant, I think that Mr. Meruelo really did get a raw deal here. If Merco had been an LLC taxed as a partnership instead of an S corporation, it likely would have worked out.  Of course there might have been medicare tax then if the project had been a winner instead of a loser, but maybe not.  The other thing that might have saved him was more meticulous bookkeeping among the various entities, rather than a lot of “due to” “due from” transactions to be sorted out by the accountant preparing the tax returns. This case is a good illustration of Reilly’s Fourth Law of Tax Planning – Execution isn’t everything but it is a lot.

Homero has a bunch of Sub Ss in his real estate empire, along with partnerships and LLCs, some of which were owned with others. The Black 08 (real estate pros need no explanation) put paid to the lot, and Homero wants a thundering NOL, but IRS says no.

There’s more, like a back-to-back loan argument, but defective paperwork torpedoes all that.

There is quite a bit of coverage on non-tax litigation that the Meruelo family of developers have been involved in.  Examples are here and here.

I previously commented on Judge Lauber’s education in covering his ruling in the case of Susan Crile – Tax Court Judge Appreciates Art More Than Your Average Revenue Agent, but in revisiting that I picked up an interesting tidbit in Jacob Dean’s profile of the judge.

Judge Lauber attended a Jesuit high school in New York City, and it was there that he first started to study Latin and Greek

Further research narrowed that down and I found that Judge Lauber attended Xavier High School (Class of 1967), making him one of the remote and lofty seniors, who introduced my classmates in the Class of 1970 to the mysteries of the precise placement of brass on the uniform, marching, saluting and standing at attention. The passing of Justice Scalia, Xavier’s loftiest judge, who was replaced by someone who attended one of the lesser Jesuit high schools was a real blow.  Having Judge Lauber on the Tax Court is good compensation.  I hope Judge Lauber will continue “marching onto victory, with colors flying guidons high”.