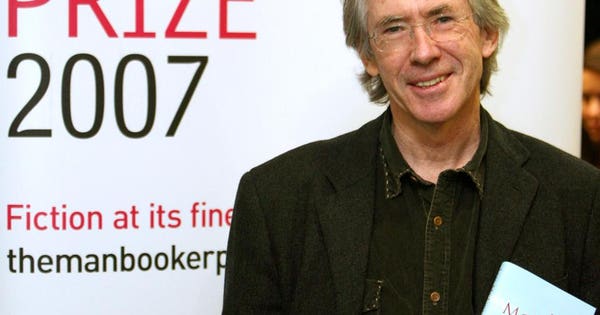 Serebral360° found a great read by Forbes – Entrepreneurs article, “My 12 Favorite Novels Of All Time.”

Ian McEwan, author and one of the short listed nominees for the Man Booker Prize 2007 poses in London, U.K., Tuesday, Oct. 16, 2007. The winner will be announced at the ceremony in London this evening. Photographer: Simon Dawson/Bloomberg News

I’ve probably read more than a thousand books in my lifetime and although I enjoy biography and history I mostly prefer novels. Why? Sure, it’s an escape but a good novel can teach me a lot about human behavior, particularly when a great author succeeds in taking me inside the heads of their characters. To me a great novel is one that I have re-read, oftentimes more than once. It’s a book where I can recall the names of characters and specific parts. It’s a book that when people ask me to recommend a great book I immediately think of it. Here are 12 of those novels that fits those criteria, by publication date.

It is 1922 and there we meet Count Alexander Ilyich Rostov, who – because of his “revolutionary” writings – has been sentenced to house arrest at one of Moscow’s grandest hotels – the Metropole. For the next 30 years, Rostov not only becomes a resident but an important part of the Metropole’s operations while all the way having a front row seat to mid-20th century Russian and Soviet history. Within just a few pages I promise you’ll fall in love with the aristocratic, genteel, courteous and always appropriate Count, as well as the friends he accumulates over the years.

The winner of the 2014 Pulitzer Prize for fiction, Tartt’s fast-pace but beautifully written novel follows the life of Theo Decker, a 13-year-old who survives a bombing at a New York museum and becomes entangled with a small famous painting that takes him from the richest parts of New York society to the depths of Las Vegas and ultimately to the book’s climax in Amsterdam. Along the way the painting – hidden but always present – accompanies Theo, through his plunge into drug use to a murderous incident overseas. What a ride.

First we meet two brothers – Harry and George. Then Harry sleeps with George’s wife. Then a murder occurs. And then…things get even stranger. Now, Harry has moved into George’s suburban home to help raise George’s two adolescent children and then finds himself meeting a woman online, growing closer to her aging parents, caring for his brother’s dog, connecting with his once-distant niece and nephew, and becoming a better person because of it. Homes has a talent for creating interesting, relatable characters as they deal with the everyday absurdities that we all experience. I’m a fan of all of her books, but this one is the one I always seem to remember the most.

This is a riveting, historical novel set during the Siege of Leningrad in World War II. The story centers around two young friends who must go behind enemy lines and fulfil the request of a Soviet officer and bring back a dozen eggs. Written by Game of Thrones’ David Benioff, the novel marries adventure with history and reminds us of the brutal hardships suffered by millions of Russians during the last great war and the small acts of bravery that made big differences during the conflict.

It’s 1962 and a young couple are celebrating their honeymoon in a small hotel on the Dorset seashore. But because it’s 1962 and it’s England, things are very, very awkward. So awkward that McEwan’s scene describing the couple’s first bedroom encounter is so well written that the reader can literally smell the tension, the sadness, the confusion and the naivetés of the newlyweds…and the period they lived in.  I’ve read this book multiple times and each time it moves me.

Like Harry Potter, this is a book that can be read – and re-read – by people of all ages. Our book thief is Liesl, a young girl growing up in Nazi Germany. Her foster parents hide a Jewish boy that ultimately becomes Liesl’s soul-mate with books – particular one he wrote especially for her – at the center of their relationship. The Book Thief is a touching, historical, terrifying and an uplifting story of how two young people can survive the very worst of times and live happily ever after.

This is a unique novel which takes place in London during the South Sea Bubble of 1720. It’s unique because Liss has chosen Benjamin Weaver, a tough guy boxer who also happens to be Jewish (in a time where anti-Semitism was common) as his very unlikely hero. Weaver, a “thief-taker”, or what’s now more commonly known as an investigator digs into the murder of his father – an event that takes him deep into the financial markets, stock manipulations and sordid characters of the time. It’s a great read about a fascinating historical period from the viewpoint of a very fascinating man.

Harry Potter and The Sorcerer’s Stone by J.K. Rowling (1997)

Being the father of three children, I’ve read all of the Harry Potter books multiple times and consider each one to have a place on this list. But I admit there’s nothing better than when it all first started – our meeting the Dursleys, the first impressions of Hogwarts and of course Harry finding out that he’s a wizard.

Like so many other books on this list, I chose this one because Lamb is one of my favorite authors and this book is one of his best. It tells the story of how Dolores Price, by living through miscarriages, an abusive husband and infidelity during the 1960’s slowly…well…becomes undone. But this book is not depressing. It’s uplifting.  Dolores, with the help of a colorful cast of friends and lovers tackles marriage, explores lesbianism, suffers from mental illness, and succumbs to drug abuse. Through it all, Dolores finds a new life and new friends for herself and ultimately becomes a better person.

He’s small. He’s squeaky. He has a high pitch voice. But Owen Meany – whose life and death is at the center of this story – teaches his best friend John (and the reader) all about faith and hope, confidence and bravery. Was he truly the son of a virgin? Is there something more to Owen Meany than what we perceive? Sometimes Irving’s writings can veer into the bizarre – and it happens a few times in this book. But it all works here.

For any lover of time travel books (like me) this is the arguably the daddy of them all. Finney’s novel tells the story of Simon Morley, a sketch artist for an advertising firm in the 1970’s, who gets enlisted by the government to travel back in time to the 19th century where he falls in love and must choose: stay or return? What would you do if you suddenly ended up in a New York of 150 years ago?

Rand’s masterpiece is about Howard Roark, a genius young architect who designs modern buildings and only wants to do it his way. To do this, he must deal with competitors who satisfy for the more “popular” approach (but still seek him out for advice), critics and journalists who try to ruin him and a girlfriend who both helps and hurts him. The book’s theme centers around existentialism and whether the efforts of an individual are truly better than that of the group.