Serebral360° found a great read by Forbes – Entrepreneurs article, “New Book Contends That Tim Cook Is A Better CEO Than Steve Jobs Ever Was.” 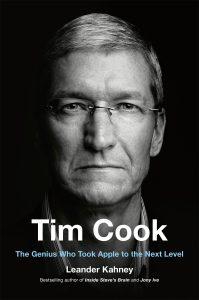 Steve Jobs has had a number of highly publicized biographies befitting the famous founder and CEO that he was. Tim Cook now gets his due in Leander Kahney’s new book, Tim Cook: The Genius Who Took Apple to the Next Level. Kahney has written multiple books on Apple and its executives, including one about Jobs (Inside Steve’s Brain) and another about Apple Chief Design Officer Jony Ive (Jony Ive: The Genius Behind Apple’s Greatest Products).

In his biography of Cook, Kahney takes us back to the predictions of Apple’s decline immediately following Jobs passing in 2011. Jobs had come to rely on a man who was his opposite in temperament, and had chosen him to run the company during his leaves of absence during his battle with cancer. Remarkably, Apple has continued to thrive under Cook’s leadership.

Kahney covers Cook’s formative years as a gay man growing up in the south, his rise in business through IBM and Compaq, his initial meetings with Jobs, the key role he played in optimizing Apple’s operations, as well as the changes of course that Cook has made since becoming the company’s full-time CEO. We cover all of the above and much more in this interview.

Peter High: In your biography of Tim Cook, you note that many leading pontificators believed that Apple’s best days ended when Steve Jobs passed away. And yet, the company has thrived in the seven plus years since Jobs’ demise. Moreover, you make the case that Tim Cook is a better CEO than Steve Jobs ever was. Please explain the highlights of the case.

Leander Kahney: Steve Jobs was never a great CEO — at least, he was never a great ’traditional’ CEO. He succeeded in spite of himself. He was thrown out of Apple the first time for sowing terror, and the second time, Apple was in crisis mode. He did an amazing job of saving Apple, of course, but once he’d righted the ship he turned over the day-to-day to Cook, who was then COO. Cook acted as the de facto CEO for several years before he officially took over, and he helped build Apple into the giant it is today. Jobs was a product guy, not a CEO, but he was smart enough to find someone like Cook to be the CEO for him.

(More evidence: NeXT, where Jobs was CEO, was largely a failure; while Pixar, which was run by Ed Catmull, was a spectacular success. This is cod history, of course, and the reality is far more complex, but still).

Modern Apple needs someone like Cook — steady, analytical, great at delegating and running a big, complex ship. Whereas Jobs was competitive and mercurial, Cook is great at cooperation and coordination, which are the skills necessary to run a giant, diverse, complex operation like Apple.

High: Cook worked at two competitors to Apple prior to joining the company in IBM and Compaq. What did he learn in those roles that would be crucial in becoming an operations executive at Apple?

Kahney: Cook learned the complexities of just-in-time manufacturing largely at IBM (which he carried over to Compaq). This expertise saved Apple in the late 1990s because he was able to use JIT to keep inventory down. Before he took over, Apple was sitting on millions of dollars of unsold parts and computers. JIT allowed Apple to make only what it could sell, and saved millions of dollars at a time when the cash was sorely needed just keep the company afloat.

High: Cook joined Apple on March 11, 1998. Where was the company in its evolution at that time?

Kahney: In 1998 Apple was on the ropes. It had a confusing and underwhelming product line and was getting its ass kicked by Microsoft and Intel. Microsoft had just released Windows 95, which was a good-enough rip-off of the Macintosh operating system, and IBM clone-makers like Compaq and Gateway were making Intel-based machines that were a lot cheaper than competing Macs. The combination was deadly to Apple; customers just bought cheaper Windows machines instead. However, Steve Jobs was about to release the first Bondi-blue iMac, which would begin the company’s turn-around. Cook helped set up an efficient manufacturing operation that made it wildly profitable.

High: Cook is the stylistic opposite of the mercurial Jobs. Please describe their rapport with each other.

Kahney: Not much has been written or talked about the relationship, but they obviously had a mutual respect. Jobs admired Cook’s ability to drill into problems. Cook’s style is to ask endless questions, which keeps his underlings on their toes. There’s no escaping his scrutiny, and it keeps everyone on top of their jobs.

High: You write that Cook made Operations “sexy” at Apple. What do you mean by that?

Kahney: It’s because operations were once a forgotten backwater at Apple; the filthy basement where old timers went to die. Operations got no respect. Cook made operations front and central to how Apple does things, and as a result, it’s where a lot of the company’s top talent now works.

High: Cook has developed six values for Apple. Some of them are at odds with how Jobs ran the company. Can you detail the six values, and underscore why he has elected to push in directions that were antithetical to Jobs in some cases?

Kahney: The six values he’s been championing are: accessibility, education, environment, inclusion and diversity, privacy and security, and supplier responsibility.

Jobs was indifferent to many of them. He just didn’t see them as priorities. Apple under Jobs was one of the least green tech companies, and got a failing grade from Greenpeace. Under Cook, it’s become one of the greenest. Jobs was indifferent at best to conditions in the supply chain, but Cook, who spent a lot of his early career on shop floors, has dramatically improved conditions in Apple’s suppliers’ factories. Cook’s a fan of Robert Kennedy and Martin Luther King. Whereas Jobs wanted to make a ding in the universe by making great products, Cook wants to “leave the world a better place than we found it,” a phrase he uses frequently, by directing Apple’s massive resources where he thinks they can make a difference: the environment, education, employment and so on.

High: You note that growing up gay in the American south was, understandably, formative in setting his values. Please describe how that has manifested itself.

Kahney: As a marginalized outsider, he sympathizes with other marginalized outsiders. He wants Apple to be more inclusive and diverse for example — hiring more women and people of color. He wants to do this because it’s right, but he also understands there’s a good business case for it. Half of Apple’s potential customers are women, for example. If you have women on the team developing products, they are more likely to suggest features targeted at women than a roomful of bros.

High: A particularly gripping part of the book details the way in which Cook “bet the company,” as you put it, in defying the FBI after the San Bernardino terrorist attack. Why did Cook choose to take this risk?

Kahney: Again, because it was the right thing to do. He argued convincingly that opening a backdoor for the FBI would endanger everyone’s devices. In an age when we do everything on our phones and tablets, privacy and security are vitally important. He had no intention of shielding a terrorist, he wanted to protect everyone else.

High: A prior book of yours is Jony Ive: The Genius Behind Apple’s Greatest Products. How has Cook’s relationship with Ive compared to that of Jobs?’

Kahney: Steve Jobs and Jony Ive were very close. Jobs called Ive his “spiritual partner” at Apple. They just geeked out about products and manufacturing methods and materials. They were like two kids in a candy store. Their families frequently socialized and went on vacations together. Cook is more distant to Ive socially, but they still have a close working relationship. Ive is very important to Cook. His design studio is Apple’s ideas factory; it’s where Apple’s new products come from.

High: As the first ever company to have a market capitalization north of $1 trillion (though it is a bit south of that figure now), how bullish are you on the company’s future given the scale of continued innovation that a valuation of that magnitude must justify?

Kahney: I’m very bullish. Cook has proven to be a great steward of the company, and most of the talent that produced the iPhone, iPad and other revolutionary products are still working there. There’s been no brain drain.  But more importantly, Apple’s culture of innovation — developed under Steve Jobs — is still very much alive and well. It’s the culture and the process that produced these products, and that’s still functioning well. As Jony Ive once said, competitors copy Apple’s products, but what they should be copying is the way Apple develops its products, and that’s still very much in evidence. Look at the Apple Watch: it’s a massive sleeper hit. It’s bigger than the iPod ever was, and will only get more useful and essential as it gets more health and wellness features. AirPods are among the best things Apple has ever done, even when Jobs was in charge. I think Apple is firing on all cylinders and I’m excited to see it continue to lead the rest of the tech industry.

Peter High is President of Metis Strategy, a business and IT advisory firm. His latest book is Implementing World Class IT Strategy. He is also the author of World Class IT: Why Businesses Succeed When IT Triumphs. Peter moderates the Technovation podcast series. He speaks at conferences around the world. Follow him on Twitter @PeterAHigh.