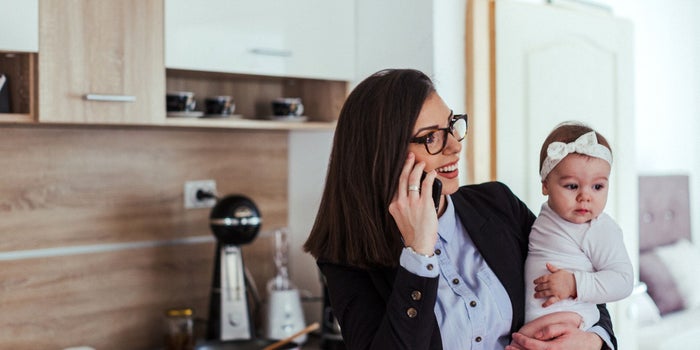 For women who take a temporary leave from the workforce to care for their children or family, returning can feel next to impossible. “I’ve had a lot of really well-meaning people tell me to quit looking,” Hagit Katzenelson, a programmer and mother, told one writer for the Harvard Business Review, “They’d say, ‘Come on, you’re banging your head against a closed door.’”

It certainly felt that way for Katzenelson at the time. Despite having an electrical engineering degree, an MBA and 14 years of experience in her field, she had to search for five long years for a job after taking a four-year break to take care of her three children. Katzenelson’s story isn’t an anomaly.

“I would get into interviews,” programmer Abby Carrales told the San Francisco Chronicle earlier this year as she recounted her attempt to break back into the workforce, “It would always come down to myself and another candidate. When employers see a gap in a resume, they assume the person has left to have children and that their career would always play second fiddle to their primary-caregiver responsibility.”

Similar frustrations echo across forums, magazine articles and social studies, all aligning with the same narrative through line: If you leave to have kids, don’t expect the working world to welcome you back. Research backs these anecdotes. In February of 2018, one Harvard Business Review study found that stay-at-home moms were only half as likely to obtain a job interview as a person who was laid off. Researchers further wrote that, “Respondents viewed stay-at-home parents as less reliable, less deserving of a job and — the biggest penalty — less committed to work, compared with unemployed applicants.”

It’s a cold hiring landscape. However, some have celebrated “returnship” programs as the solution to returning mothers’s hiring woes, indicating that such initiatives can provide former stay-at-home parents the tools they need to break the ice — partially, at least.

Returnship programs aren’t, strictly speaking, new. Goldman Sachs launched the first returnship initiative a little more than a decade ago; since then, 50-plus companies have opened their doors, including IBM, Johnson & Johnson and United Technologies. In April, Apple offered a 17-week return-to-work program for professionals who both took time away from work and have more than five years of professional experience. These programs are typically open to people who have left their industries for two or more years and last for a limited period — usually between eight weeks and six months — and are designed to provide networking and mentoring opportunities, help returnees refresh their professional skill set and give the company a chance to gauge whether the returnee is a long-term fit.

A Solution, or Just a Flawed Fix?

For both Katzenelson and Carrales, returnships were a lifeline, a means to climb out from the hiring sinkhole they had been struggling with for years. Both cited the returnships as stepping stones for getting back into their careers. Their stories provide hope to stay-at-home parents who want to return to work. And to be sure, all returnships offer participants the chance to update their resume and gain professional acceptance, even if they aren’t hired at the end of the program period.

However, these programs are not without their flaws. While some returnships are paid, many are not. Others require the returnee to pay for their participation. Hiring, too, can vary widely. While Ford’s returnship program hired 98 percent of its enrollees, Goldman Sachs only accepted 1.9 percent. Both are on extreme and opposing ends of the hiring spectrum; research indicates that most programs hiring between 50-100 percent of their participants.

Then there are the semantics. Should experienced moms fall under a subcategory of “interns”? For some, embarking on a “returnship” may mean accepting — at least subconsciously — that their skills are less valuable. As one writer protests in an article for Working Mother, “Companies like Goldman Sachs actually play on this perceived lack of expertise or skills. They promote the low self-confidence some people feel after being out of the workforce and use it to their advantage. Under the guise of helping people get up to speed and allowing employees to ‘see if it is the right fit,’ they get a no-risk trial and can fire you.”

This might not be entirely fair, especially given that these programs do help participants add to their professional networks and update their skills. However, the writer does have a point. While many programs don’t approach their participants as low-level, inexperienced or temporary staffers, the implication is baked into the title. I would argue that the assumption of inexpertise and the dismissal that the writer highlights is a symptom of a broader problem, one that returnships can only partially address, even as they reinforce it through nomenclature: the devaluing of and bias against mothers in the workforce.

Go to the Source: Examining the “Mommy Tax” at Work

Returnships are a halfway solution, but they don’t solve the underlying social problem mothers face in the workplace. Research has repeatedly shown that mothers who leave the workforce for an extended period to care for children — or even simply have children — face penalties in their career. One study conducted by the nonprofit thinktank Thirdway found that women’s wages decreased by an average of 4 percent for each child they had. Ironically, men’s wages increased by more than 6 percent when they had children. The gap between the genders remained even after researchers controlled for significant factors such as education, hours worked, experience and spousal incomes.

A study published in the Journal of Applied Psychology may shed some light on the cause of the gap. Researchers wrote, “Mothers were expected to be less competent and were less likely to be kept in the running for advancement opportunities than were other female or male applicants who were applying for the same high-level managerial position.” The writers further explained that hiring managers expected mothers to adhere to overly “feminine” behavior stereotypes; female candidates were believed to be too soft, too focused on their home lives and not suited to the demands of a male-dominated workplace.

With this, we can see that returnships aren’t a golden career ticket for stay-at-home moms; instead, they serve as a band-aid on the larger professional injury that social bias causes for women in the workplace.

What Does This Mean for the Future?

I’m not suggesting that women call for an end to returnships, or even that they avoid them. Quite the opposite. I believe that we need to provide more resources for stay-at-home mothers in and beyond the workplace. We need to establish more apparent channels for re-entry, push for more flexible and family friendly policies in the workplace and create programs that acknowledge the skill set women already bring to the table instead of framing their re-entry as an “internship.”

Most of all, though, we need to turn our focus inward and face the unacknowledged bias that so often prevents women with families from returning to work. As one leader for the job listing company Apres put the matter, “It’s one thing to say you are going to hire women on the sidelines, it’s another thing to train your hiring managers to interview without bias toward the gap.”

Gender bias isn’t going to be something we can solve with a single training program or one push towards returnship expansion. But if those in the business world launch a cohesive effort to value, welcome and support women returning to work, we might be able to give mothers a fair shot in the interview room.

Related:
On Momternships: Do Working Moms Really Need to Start From Scratch?
The Wonder Woman Disrupter Next Door: Catching Up With the Unstoppable Nicole Sahin
Alia Bhatt-backed Start-up Will Utilise Funds to Provide Personal Style Concierges

“On Momternships: Do Working Moms Really Need to Start From Scratch?” | Written By: Debrah Lee Charatan / Entrepreneur
November 18, 2019 at 09:16AM
VIEW ARTICLE ON Entrepreneur >> https://www.entrepreneur.com/article/342348