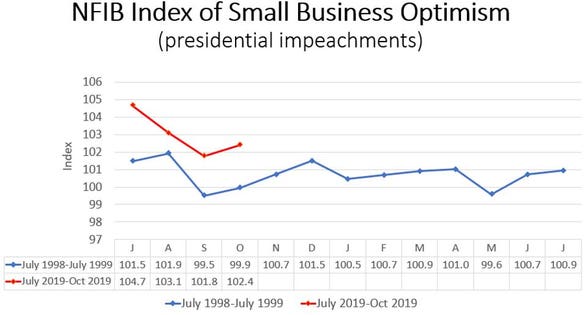 Elected officials, as government employees, have significant influence over the general economy and the small business sector. When they are distracted or at risk of being removed from office, it is reasonable for the general public to have some concern about the effective functioning of government. Over the past few decades, politicians at all levels of government have been involved in varying degrees of conflict that impact their effectiveness and viability as leaders, but none as significant as an impeachment proceeding involving the President of the United States.

The current impeachment process involving President Donald Trump could escalate many uncertainties about the potential adverse impact on “governance” including progress on “the people’s business” in Congress and the management of the regulatory process, which have significant impacts on business and consumers. NFIB has been collecting data on small business expectations, operations, and attitudes since 1973, making it possible to examine the impact of the impeachment of President Bill Clinton on small business owners and the potential impact of the current impeachment process for President Trump.

Just how these proceedings might impact business owners’ expectations (and subsequent actions) is ambiguous. At one extreme, it is a news event that is followed with interest but is not viewed as consequential for businesses. At the other end, owners might be concerned that a successful impeachment could derail policies in place or interfere with legislative programs that are important to businesses.

NFIB produces the Index of Small Business Optimism, a headline measure of the small business economy.

Looking at the Index, it showed little variation over the 1998-99 period that includes the pre-impeachment news coverage, the impeachment proceedings, and its aftermath. The initial 2019 path is starting in similar fashion, albeit at a stronger position. So far, it appears there is not much indication that the impeachment proceedings have much of an economic impact. A strong economy appears to supersede political disruptions when there is little effect on policies negatively impacting the economy or small business sector.