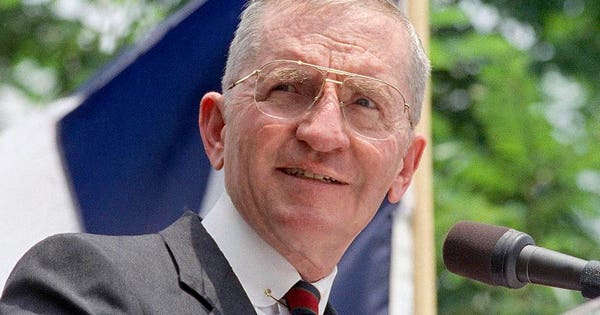 Serebral360° found a great read by Forbes – Entrepreneurs article, “Ross Perot Was Prophetic About GM In 1986: The Automaker Was A Lumbering Giant Destined To Fail.”

FILE – Presidential hopeful H. Ross Perot speaks at a rally in Austin, Texas, in this 1992 file photo. Perot, the Texas billionaire who twice ran for president, has died. He was 89. (AP Photo, File)

Long before gaining celebrity as a presidential aspirant whose third-party candidacy gained 19.7 million votes in 1992, Ross Perot shook up the nation’s corporate world as a self-styled entrepreneur whose impact belied his diminutive stature.

When General Motors in 1984 spent $2.5 billion to acquire Electronic Data Systems, which Perot had founded 22 years earlier, the transaction at first looked like a brilliant play by GM to introduce modern computing throughout its operations.

Just months later, Perot – who died today at the age of 89 – was clashing with GM management and chief executive Roger Smith as the newest member of the automaker’s board of directors.  Now on the inside of GM, he discovered the company was too slow, bureaucratic and hidebound – and that Smith wasn’t keeping his promise to allow EDS executives introduce computing technology quickly or thoroughly enough into GM operations.

Disillusioned by GM’s slow pace of innovation and decision making, Perot famously quipped “at EDS when we see a snake we kill it. At GM they appoint a committee to study snakes.”

Eventually, Perot exited GM – but not before publicly denouncing Smith and excoriating the automaker’s business practices. The blowup foreshadowed GM’s deteriorating performance and accumulating debt, which culminated in the company’s 2009 bankruptcy. Perot had been prophetic: GM turned out to be a lumbering dinosaur that finally couldn’t get out of its own way.

Perot’s advancing age, a desire for privacy and declining health dissuaded me from asking his opinion about the government’s decision to reorganize and refinance GM rather than to allow a possible liquidation.  My guess is that he would have approved, because he had great affection for GM, regarding it as an American institution, not another giant car company.

In fact, Perot originally had been ambivalent about selling out to GM – but he was convinced that he and EDS had the potential to energize and modernize its acquirer, which was feeling increasing heat from rising competition from Japan’s car industry and especially from Toyota Motor Corp.

Perot’s spirit, humor, business insights, warmth and generosity will be missed.  After his family, he cared most about the people of EDS and a subsequent company he founded, Perot Systems. As a graduate of the U.S. Naval Academy, he had a soft spot for military veterans and hired many of them over the years.

The son of a cotton trader from Texarkana, he was an Eagle Scout who rose from humble origins to the highest levels of American business, wealth, politics and civic life. He was never ostentatious or showy, preferring when I knew him to drive a three-year-old Buick Electra.  One evening at a Dallas restaurant, I gave the waiter my drink order and Perot declined, explaining that he had never sipped alcohol.

“When I was young my father asked me not to,” he replied.

Years later I am still inspired by his sense of duty, his loyalty to his father’s memory and his devotion to the principles of scouting, the Naval Academy and business success.