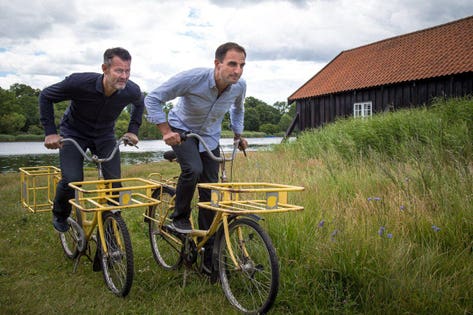 The Nordic startup community is the biggest unicorn factory in the world, with the number of startups growing four times over the last five years.

But access to early-stage funding and the practical knowledge that helps startups grow have not kept up with the increasingly rapid pace of innovation. “Firms must scale rapidly now if they are to make it,” says Eric Lagier, Managing Director of byFounders, the early-stage venture capital fund based in Copenhagen and San Francisco. ”Today’s startups compete for markets and talent globally.”

To address this, Lagier and his co-Managing Director, Tommy Andersen, have announced that they are launching an initial fund of €100m to support the next generation of Nordic and Baltic tech start-ups in scaling up and expanding globally.

The largest investor in the new fund is the Danish Growth Fund. Others include Isomer Capital, Draper Esprit, Digital Garage, as well as Danske Bank and a number of prominent Nordic family businesses.

“Established funds like Creandum, Northzone,  and EQT and Heartcore have all existed for many years,” explains Lagier. “However, as they’ve proven their worth, their fund sizes have grown, and we see them moving away from the early stages. Early stage investing is our sweet spot, and we see ourselves filling a different role in the ecosystem.”

Historically, many Nordic tech companies like Zendesk and Tradeshift have had to relocate to the U.S. when they wanted to expand, to unlock capital and markets. The emergence of firms like Northzone meant that Spotify and iZettle and some of the region’s most successful startups could remain in the region and have helped build a strong tech ecosystem that is continuing to drive entrepreneurship.

byFounders is a powerful and influential VC fund, a collective of over 50 of the most successful startup founders from the Nordic and Baltic region, including Morten Primdahl,  David Helgason

Taking Nordic consensus building to its logical extreme, byFounders is a collective, with each member actively involved with the portfolio companies. All have invested in the new fund.

Copenhagen, Denmark; don’t be fooled by the medieval houses along the canal of Nyhavn. This is a tech hub.

Its portfolio of companies includes the AI critical care diagnostic company Corti, SafetyWing, the digital travel insurer, and Cobalt.io, which makes penetration testing software. byFounders plans to make a further 30 investments over the next three years.

“What’s particularly exciting for us, is that many of the founders that previously had to leave the region like have all returned to the Nordics and Baltics,” Lagier says.

“It’s natural for every tech ecosystem to compare itself to Silicon Valley but the Nordics has established itself as a true birthplace for unicorns and high-growth companies with numerous billion-dollar exits,” adds Tommy Andersen. “The region can and will compete with any other place in the world when it comes to fostering and growing companies.”