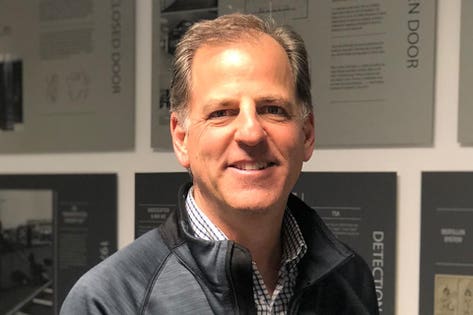 Serebral360° found a great read by Forbes – Entrepreneurs article, “Security Startup Wants You To Feel Safe Wherever You Are.”

Ellenbogen recently took his 17-year-old son and some of his friends to the Boston Garden for a concert, not long after the Las Vegas shooting, where 58 people died and 851 were injured.

As he was driving around picking up his son’s friends, Ellenbogen realized each of them had had conversations with their parents about what to do “if something happens.”

“We did not have that anxiety going to a concert when we were 17,” Ellenbogen, 54, said. “My kids have been going to active shooter training in school since first grade. We had fire drills. It’s a different world.”

Ellenbogen, CEO of Evolv Technology in Waltham, Massachusetts, has worked in security, primarily for aviation, for nearly 25 years.

Evolv is Ellenbogen’s third startup. His last company, called Reveal, makes systems that screen suitcases for explosives, and is being used in 250 to 300 airports worldwide. Ellenbogen sold Reveal in 2010, and took a couple of years “to figure out what I was going to do when I grow up.”

“Physical security is in my blood,” Ellenbogen said.

Ellenbogen started thinking about how to bring aviation-type security to the places people go every day – train stations, sports stadiums and office buildings, for example. The thing is, nobody wants to wait 45 minutes in a line to get into a stadium. Truth be told, people don’t want to wait 45 minutes to get on an airplane, but they have no choice.

“Our challenge was how to bring a level of technological thinking to making these venues safe and secure in a way that doesn’t cause bottlenecks or create a hassle,” Ellenbogen said. “We’re doing that by applying new sensors and the latest thinking in machine learning to make (our technology) smart enough to allow seamless screening as you walk into a house of worship or a stadium.”

The Evolv Edge scans you as you walk through it for firearms, explosives or other weapons, and identifies you through face recognition – all in an instant. If you are a threat, your picture will come up on the screen of a nearby security guard, with a color-coded box identifying the part of your body where the threat exists.

“If you’re carrying a gun on your right hip, there will be a box on the right hip so the guard knows eactly where to look,” Ellenbogen said.

Ellenbogen founded Evolv five years ago, taking the first three years to develop the technology. He started shipping the Edge at the end of 2017, and already has hundreds in place, he said.

“We’re in performing arts centers, stadiums, airports in the United States and Europe, and synagogues,” Ellenbogen said. “We’re very actively deploying now for a number of different applications. Airports are doing employee screening from the non-secure to the secure side of the airport, especially overseas where they had an attack on the Brussells airport.”

In Brussels, Ellenbogen said, they’re using the Evolv Edge at the front door to protect the terminal itself.

“We have locations that are finding 20 to 30 firearms a week,” he said. “It’s remarkable. Most of those are not people intending to do harm. In the United States there are locations where a lot of people have a license to carry a firearm. You may not want people bringing firearms into a performing arts center.”

Evolv has 45 employees and is selling across the United States and in more than 20 foreign countries. Ellenbogen declines to discuss annual revenue or percentage growth, or even the cost of the Evolv Edge, but he says it’s about a third of the cost of airport body scanners, making it “easy to fit into the budget.”

Which means there may be an Evolv Edge coming to a venue near you soon.