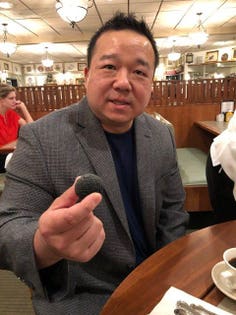 Serebral360° found a great read by Forbes – Entrepreneurs article, “Self-driving Could Get A Big Boost If This Automotive Radar Startup Is On The Right Track.”

His company has developed a new variety of radar that could speed development of driverless tech.

The hideously difficult, costly and time-consuming development of self-driving technology hungers for breakthroughs such as the one that two-year-old startup Lunewave hopes and believes it has accomplished with a specialized radar that can be used to sense an automobile’s surroundings.

While most automotive radar systems – which already are used for advanced features such as adaptive cruise control – need multiple antennas to overcome limits in field of view and range, Lunewave’s radar employs a spherical, much smaller version of a type used in fighter planes. Lunewave says its radar vastly expands field of view and range – and can overcome weather-related interference.

Placed on top of a car, Lunewave says its radar has a 360-degree field of view, with consistent performance.

A Pony.ai Inc. autonomous vehicle stands on a sidewalk in the Nansha district of Guangzhou, Guangdong Province, China, on Wednesday, April 10, 2019. Domestic and foreign testers are putting cars, buses, trucks and delivery vans through self-driving trials to teach them how to navigate the notoriously congested streets of the world’s biggest auto market. Photographer: Qilai Shen/Bloomberg

John Xin, 41, Lunewave’s CEO, explains that until recently his company’s spherical antenna simply would have been too complex and costly to be manufactured in small enough size and cheaply enough for use as an automotive sensor.  Enter John Xin’s older brother Hao Xin, 46, who holds a physics doctorate from Massachusetts Institute of Technology, specializing in radars and antennas.

For years, Hao Xin had been experimenting with 3D printing technology and was convinced it would be possible to create a smaller, cheaper version of the type used by the military for commercial applications.  Last year, John Xin told Techcrunch that a single laboratory 3D printer can produce 100 antennas in a day, a commercial printer 1,000 a day.

“I got my MBA from Carnegie Mellon University and had worked in a variety of businesses – but my brother wanted me to join him in a startup” to commercialize radar technology based on the spherical antenna first proposed by Rudolf Luneburg in 1944. The brothers had emigrated with their parents from the Peoples Republic of China when they were youngsters.

After much discussion with his wife, John Xin agreed to join his brother. The company is based at the University of Arizona, where the elder Xin is a professor in the Department of Electrical Engineering. So far, Lunewave has raised $6 million in venture capital from a subsidiary of BMW, a subsidiary of Chinese tech giant Baidu, Fraser McCombs Capital and others. Lunewave employs 25, is working to raise $15 million more and hopes to increase employment to 75 by October.

While John Xin is reluctant to name which companies other than BMW have been testing Lunewave’s radar, he said that its performance is promising.  The goal is for Lunewave antennas to be selected for series production in one or more vehicle models.

“Sensor fusion – the matching of different types of sensors – is important,” he said. A fully functioning autonomous car could be ready for the market “in anywhere from three to eight years,” he said.  “Safety is so important, we are seeing so much electronics going into vehicles. Our focus to provide the right radar technology.”