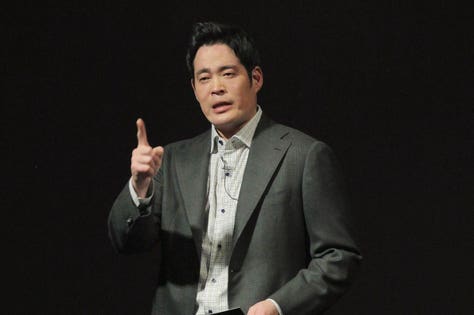 Chung Yong-jin, the vice chairman and CEO of Shinsegae Group

The specter of online shopping is haunting Korea’s giant Shinsegae group and its billionaire vice chairman Chung Yong-jin, who runs Shinsegae, Korea’s second-largest retailer after Lotte by sales, and mass-market retail subsidiary E-mart. Shinsegae’s stock has fallen 38% since we last measured fortunes; that’s despite a 33% increase in net profit on sales that more than doubled in 2018. A similar story is playing out at E-mart, whose shares fell 50%. That helped push Chung down to No. 39 on our list from No. 26, as his net worth fell 32% to $1.01 billion.

Chung, 50, a graduate of Brown University in Providence, has a pedigree that goes back to Samsung founder Lee Byung-chull. Chung’s mother, Lee Myung-hee, is the founder’s fifth daughter and chairs the Shinsegae group that Lee bequeathed her when he divided his empire between his children before his death in 1987. Her older brother, Lee Kun-hee, Byung-chull’s third son, got the biggest prize, Samsung.

Shinsegae department stores rank among the country’s finest, while smaller E-mart discount stores appeal to the broader middle class. One of the group’s innovations is its Peacock brand of “home meal replacement” ready-to-eat dishes designed for working women. Peacock, which is sold at both Shinsegae and E-mart stores, offers more than 1,000 items, from traditional Korean cuisine to international dishes and desserts.

Peacock sales have risen from $29 million in 2013 to $214 million last year, up 9% from the year before, but Peacock alone is “not a game-changer,” said Geoffrey Cain, author of Samsung Rising, a forthcoming book on the Samsung empire. Tom Coyner, an independent business analyst in Seoul and Tokyo for 30 years, says department stores like Shinsegae and mass-market retailers like E-mart and Lotte Mart suffer from competition from internet sites. A Shinsegae spokesman, who asked not to be named, concedes that the company’s falling share price is due to a “grim outlook” as major big-box stores lose ground against fast-growing online shopping malls.

But Coyner says Shinsegae also bears some of the blame for poor in-store marketing. “The walk-in consumer may find a huge amount of inventory for sale,” he says, that often lacks variety. A manager at Shinsegae, who asked to remain anonymous, counters that the stores do offer variety and that online malls are the main reason for Shinsegae’s falling share price.

Aside from online competition, Shinsegae’s key shareholders seem to have prepared to shift ownership to the next generation. Group matriarch Lee Myung-hee and husband Chung Jae-un, honorary chairman, have assured the continuity of family control by transferring large blocks of shares to their son and daughter.