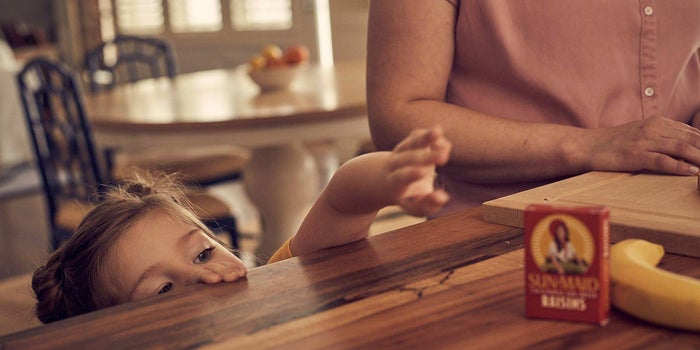 Serebral360° found a great read by Entrepreneur article, “Sun-Maid Raisins Has a Bold Plan to Reinvent Itself. (Watch Out, Fruit Roll-Ups!).”

Harry Overly got an unexpected call one day from Sun-Maid, the raisin company with the famous red box featuring a grapes-­carrying girl. It needed a new CEO — was he interested? “What is the appetite for risk?” he asked in response. Because Overly, a food industry veteran, knew the job wouldn’t be easy. Two decades ago, American-­grown raisins represented 45 percent of global raisin sales; today it’s less than 20 percent. And Sun-Maid, which grows its product in California, had barely marketed itself during that time, which meant it had a lot of catching up to do.

The company promised it was willing to take risks, so in late 2017, Overly took the job. Then he set about reviving the brand by focusing on two main tasks: Sun-Maid needed a new voice and new products. But what voice? And what products? That would take time to figure out.

“Our biggest challenge was recognizing that our biggest source of volume were the Greatest Generation and baby boomers,” Overly says. Those older folks snack on raisins. Young people don’t — but they’re the growth opportunity. That meant, as Sun-Maid developed a new marketing voice, it needed to somehow speak to millennials without alienating their parents (or grandparents).

Overly hired a branding team, and they began testing messages. They tried a focus on health — hyping Sun-Maid’s nonprocessed, non-GMO raisins. But that proved dangerous; it made consumers wonder if Sun-Maid had been less healthy in the past. Eventually the team found a winner in nostalgia. Young and old consumers alike loved being reminded of eating raisins as kids. “Both groups individually thought the messaging was designed for them,” he says. In early 2019, the brand released its first ad in 20 years, featuring an adorable little girl talking about childhood and raisins.

But although childhood made for good marketing, it also represented a problem. Sun-Maid’s data shows that people buy raisins for their children but then stop when the children lose interest — and the next time those children buy raisins is when they’re full-grown adults shopping for their own children. That’s a huge gap in time. Overly wanted new products to fill it.

Sun-Maid had tried this before. In fact, just before Overly joined the company, it released a limited test product of sour raisins that taste like Sour Patch Kids. “We have this fantastic product,” Overly says, but he spotted a problem. “We’re not communicating it the right way, and we’re not selling it in the right part of the store.” Sun-Maid had always marketed its products as dried fruit, but Overly says that kept its sour raisins in the same part of a store as regular raisins –minimizing exposure to new customers. He wants to start competing in new categories, so he’s repackaging the sour raisins to compete as a fruit snack, going head-to-head against Fruit Roll-Ups as a treat for older kids.

Related: Kristen Bell and Her Cofounders Built a Company to Save Lives. But Growing It Wasn’t So Simple.

Where else can Sun-Maid compete? To find out, it did an exhaustive study — figuring out who trusts the brand, and what other categories of food they buy and would trust Sun-Maid to provide. “No surprise, we see overlap with nut mixes, granola bars, protein bites, and protein bars,” Overly says. And that’s just the start. He’s now developing products to play on those shelves, too.

Overly expects big results. He wants the business to grow by $100 million in the next few years. Time will tell if he’s successful. But he’s encouraged by talking to consumers, who seem eager for change … so long as Sun-Maid’s well-known packaging remains the same. “If you’re going to do something different,” they tell him, “you’d better have red, and you’d better have the girl.” No problem, he says.

Listen to the unedited version of this conversation with Harry Overly on this episode of Problem Solvers.

Related:
Sun-Maid Raisins Has a Bold Plan to Reinvent Itself. (Watch Out, Fruit Roll-Ups!)
SimpliSafe Chased the Wrong Customer. This Pivot Saved The Business.
Why This CEO Fired Himself