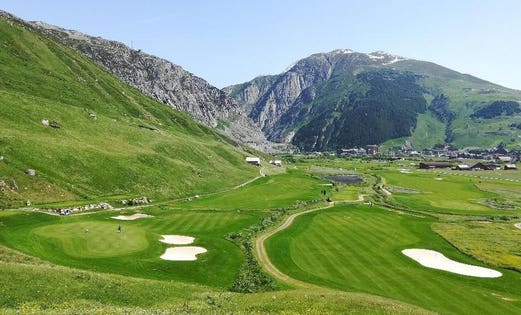 The Swiss village of Andermatt knows a lot about the abundant possibilities related to travel.

Situated high in the Alps, narrow mountain passes head in four different directions and business travelers, albeit of the very early kind, began making journeys through them centuries ago, connecting the riches of Italy with the money of northern Europe, later witnessing transit from east to west and back again.

In the mid-1800s the village thrived during the first age of modern tourism. England’s Queen Victoria and her family were particularly keen visitors, enjoying the fresh mountain air and amiable welcome of the locals.

Half a century later her compatriots descended on the village from the steep slopes which surround it on their skis and sleds, the very first winter sports enthusiasts whose passion was quickly observed, and capitalized on, by travel entrepreneur Thomas Cook, kickstarting a social phenomenon that is yet to abate.

And now the village hopes that it stands on the brink of a third era of travel-inspired prosperity, courtesy of a program of regeneration initiated by Samih Sawiris, the businessman and head of Orascom Development which builds and operates resorts in Egypt (his home nation), Montenegro and now Andermatt, where golf is at the heart of the region’s transformation.

Although the locals have never lost a keen sense of identity, in the latter decades of the 20th century the Swiss Army was based there, changing Swiss perception of their village, and when it departed the streets were quiet.

Sawiris spied an opportunity: a location plum between Zurich, Lucerne and Milan, accessible by road or the excellent Swiss train network; a community ready to be re-invigorated; and potential, with investment, for year-round travel trade.

Achieving the latter began with the construction of the Chedi Andermatt, a five star hotel in the center of the village, but more recently, at the Andermatt Reuss site a short walk from the village, another hotel, the Radisson Blu Reussen, and Gotthard Residences have been added on Piazza Gottardo, at the heart of a new community that will reside in apartment blocks and chalets situated on the banks of the River Reuss.

But these two neighborhoods will not be distinct: The project is designed to utilize the character and spirit of the old village and the people who live there. Bars and restaurants in the new area will be kept to a minimum to encourage use of traditional establishments.

The winter sports crowd has always retained affection for the region, but now it has even more reason to journey to the village because, with the development of a series of chairlifts and gondola cableways, the ski slopes have been opened up like never before, creating SkiArena Andermatt-Sedrun, the largest and most up-to-date ski resort in central Switzerland, with runs that accommodate skiers, snowboarders, ski tourers, snowshoe trekkers, free-riders and cross-country skiers stretching 120km from Andermatt to Sedrun with a new link to Disentis due to open later in 2019.

A newly erected Concert Hall, which was opened with a performance by the Berlin Philharmonic last month, offers the opportunity to maintain trade when the ski season ends and then, when the valley emerges from its snowy blanket, so, too, does the Andermatt Swiss Alps golf course.

Andermatt translates as “at the meadow” and it is on this meadow that the golf course has been designed by Kurt Rossknecht, a German architect whose layouts have hosted the European and Challenge Tours.

As anyone who has watched the European Tour’s annual visit to Crans-sur-Sierre can attest, golf played with an alpine backdrop is a spectacular jolt to the senses and this course is no different.

Even on the brink of high summer, the mountain tops are snow peaked, the fairways echo to the tinkle of cowbells and glacier-fresh water tumbles down the slopes from waterfalls into creeks and streams which wait for errant shots.

It’s a good examination, visually reminiscent of Scottish inland tracks, especially at the far end of the course which briefly climbs into the lower reaches of the surrounding slopes.

It is also a fun test. High handicappers can take safe lines whilst better golfers can spar with risk and reward options.

Both the Chedi and the Radisson Blu Reussen offer packages for visiting golfers whilst those purchasing property can access reduced green fees.

Since its opening in 2016 the World Golf Awards have voted the course Best in Switzerland three years in a row and it took first place in the Swiss Golf Awards (following a vote by over 15,000 players).

After 18 holes players can refuel in The Swiss House, the clubhouse’s restaurant, and maybe then hire an e-bike from the shop on Piazza Gottardo and head into the mountains.

For this high corner of Switzerland, where Queen Victoria and the skiers first journeyed, golfers are now following. All part of the rejuvenation of a mountain village that has always made welcoming, and reviving, the weary traveler a habit.