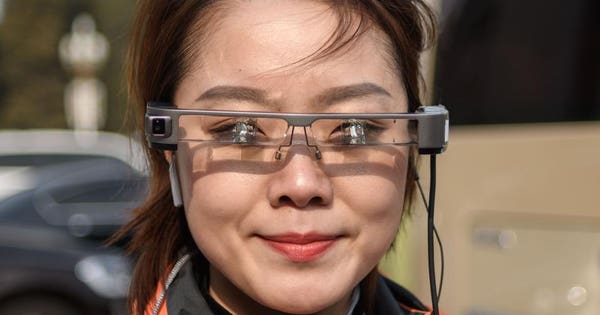 A Chinese journalist wears camera-enabled smart glasses for live reporting outside the Great Hall of the People before the opening session of the Chinese People’s Political Consultative Conference in Beijing on March 2, 2019. (Photo by FRED DUFOUR/AFP)

If you put on a particular pair of glasses displayed at Taipei’s premier tech show last month, you saw the inside of a body opened for surgery baring blood and tendons – as if you were a surgeon. The light, even comfortable spectacles made by Jorjin Technologies anchored an exhibit of made-in-Taiwan “smart” glasses at Computex Taipei. Jorjin and 16 other companies with bases or R&D offices on the island long known as a world tech hardware center are retooling the wearables that made their first major impression in the general population with the Google Glass launches of 2011 and 2013.

But it was the general population that led Google astray as it came out with spectacles that show texts, weather, maps and other content right in front of a wearer’s eyes. Google’s first iteration was for the mass market.

In May, however, Google introduced the Google Glass Enterprise Edition 2 for business clients. Developers in Taiwan saw the shift to enterprise coming a few years ago and started designing spectacles targeted towards business clients, says Cheng Yu-jung, secretary general of the Taiwan Smart Glasses Industry Association. Google’s first foray was “officially a mistake,” Cheng says. In Taiwan, he says, “we expect the industry growth rate to be better and better over time.”

The smart-glasses sector is small in Taiwan – Cheng doesn’t have an estimate for its size – but growing. Worldwide, the smart glasses market should increase to about $20 billion by 2022, up from just $340 million in 2017, market research firm ReportLinker forecasts.

Trying to redo the old Google Glass isn’t unique to Taiwan. American firms such as North and Vuzix have made their own specs costing upwards of $1,000 per unit and not just for the business market. In Japan, Epson is selling glasses for commercial as well as mass-market use.

But Epson does a lot of its R&D in Taiwan. “Because Taiwan is a major location for the IT industry, upstream and downstream companies form a complete hardware supply chain and it’s a good place for integrating that with software,” local sales representative Hsieh Hsiu-ju said at the Taipei tech show. Epson’s first lenses sold in 2011, and it’s now working on augmented reality-glasses for business clients.

The industry in Taiwan can develop relatively fast due to an existing domestic supply chain for consumer electronics. The island’s manufacturing sector has churned out PCs, tablets, phones and peripherals on contract since the 1980s. Smart glasses work a lot like mobile phones and tablets because they incorporate voice and touch commands. That means Taiwanese assemblers and suppliers – in semiconductors particularly — can quickly jump into smart glasses.

“The whole supply chain in Taiwan is actually quite similar to other devices, and that means it’s a chain we’re familiar with,” Cheng says.

Developers based in Taiwan include optics firm Coretronics Corp., PC contractor Quanta Computer and the smartphone firm HTC. A strong Taiwanese clientele is helping the industry grow on customization, also a local strength, Cheng says. Taiwan’s major industries, eager to use smart glasses for logistics and manufacturing of textiles and semiconductors, are placing a load of orders with local developers, Cheng says.

Business customers particularly want the surgery-type glasses, essentially lightweight holographic lenses that support augmented reality. That term means inserting some computer-generated object into a normal field of vision, often to help with some tasks. Augmented reality glasses sometimes require no backup from other electronic devices such as PCs. Some have a camera on the lenses, letting users know where they are as they move around and letting them add augmented reality images.

These uses of smart glasses in Taiwan eventually can be “copied over” to other places such as the U.S., Cheng says.

Jim Pan, a senior manager with Taiwan-based Jorjin Technologies, shows smart glasses for medical use at the Computex Taipei show, May 28, 2019. (photo by Ralph Jennings)