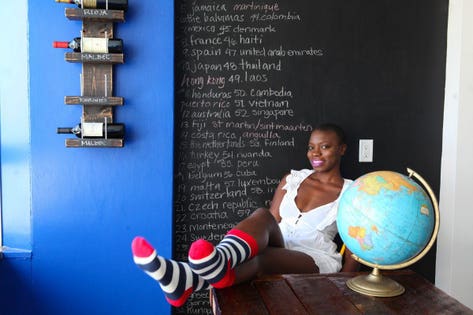 Serebral360° found a great read by Forbes – Entrepreneurs article, “The 33-Year-Old Who Left A Six-Figure Job To Start A Travel Company.”

In 2017, Jessica Nabongo spent only 21% of the year at home. Bouncing from places like Sri Lanka to the Maldives or from South Africa to Mozambique, she visited 53 countries, 38 of which were new to her. That’s over 189,000 miles on 131 flights.

Looking into 2018, the American has no plans of slowing down her globetrotting. She’s has already visited nine countries, including Botswana and Saint Kitts and Nevis, with plans to see many more.

Her schedule would tire the most adventuress person, but for Nabongo, an entrepreneur with some serious wanderlust, it’s all part of the digital nomad life that she’s been building since her early twenties.

Living abroad for the first time

It all started when Nabongo was 23. She’d been working as a pharmaceutical representative for Pfizer in Detroit, Michigan and realized she wanted more than a nice house and a fancy car. And so, she made the decision to leave her corporate job and move to Japan to teach English.

The American had already been to three continents but had never explored alone before. But she didn’t let the lack of solo female travel experience dissuade her.

“From a financial perspective I didn’t feel vulnerable,” says Nabongo, which she thinks helped make the decision easier. At the time, she had a low overhead  – around $180 in student loans a month. Although she had a mortgage on her riverfront condominium, she was able to rent it out so the property paid for itself.

Having a financial and professional safety net

With around $10,000 saved in the bank, plus her teaching salary, she knew she could financially swing her adventure. And more importantly, Nabongo knew she could always find a job again in corporate America, if that’s what she wanted.

And so Nabonogo packed up her life into a storage unit, shaved her head (she was concerned about not being able to find a salon that could style black hair) and had an epic goodbye weekend. She hasn’t looked back since and now the shaven locks are part of Nabongo’s signature look.

“I set my life up so that in the event that I needed to go back [to the US] and work for someone, I could,” says Nabongo. “I worked for two years for the number one pharmaceutical company.”

Initially attracted to Japan’s street fashion and culture, Nabongo  was also intrigued by the linguistic similarities between Japanese and Luganda, the language of her family’s tribe in Uganda, as they both use long and short consonant sounds. When she arrived, everyone was able to say her surname properly. Nabongo says, “my whole life in school in America I’ve never had anyone else pronounce my name perfectly.”

Living in the prefecture near Kyoto, she struggled the first three months with the language. Although she used the Rosetta Stone to practice a month before moving to Japan, it was difficult picking up a non-Latin based language.

“When you go to western Europe, you can recognize words,” points out Nabongo. “You can’t do that in Japan.”

Not one to be discouraged, Nabongo studied the language for two hours a day, eventually passing a basic level proficiency exam.

The charm of London

Falling in love with expat life, Nabongo vowed to live abroad for at least three more years after her time in Japan. She ended up living outside of the United States for seven, bouncing from Asia to Europe and back again.

A highlight for the millennial was living in London while pursuing her master’s degree at the London School of Economics. Nabongo fell in love with the multicultural city, saying she would probably be based there, if it wasn’t for the weather.

“You can walk down the street in London and hear 15 different languages,” says Nabongo. Describing the city as “the gateway to the world” she says “you can get almost anywhere on a direct flight.”

Crisscrossing the globe, Nabongo then moved to Benin and Italy, landing a full-time gig with the United Nations. Although she loved Rome, she never felt completely comfortable in the city because of the racism she encountered there, which she attributes in part to the country’s lack of immigration.

Speaking with the American, it might sound easy to land international gigs for prestigious organizations. But as she points out, it takes a lot of behind-the-scenes work to be able to bounce from organizations like Pfizer to the United Nations. In addition to having excellent grades, she says going to a highly reputable graduate program like LSE opens a lot of doors and gives you an international calling card. Other programs the millennial recommends include Sorbonne University, London Business School, Oxford University or the University of Cambridge.

After missing too many birthdays and babies and weddings and funerals, Nabongo moved back to the United States when she turned 30, landing a job as a consultant for USAID. But she still had the travel bug.

After helping a high-profile friend organize his honeymoon, Nabongo came up with the idea of Jet Black, a botique travel agency that encourages tourism to countries in Africa, Central and South America and the Caribbean.

When he returned, he said it had been the best trip he’d ever been on. It was 2015 and she decided to build her own business, using her savings to print cards and create a website.

“My focus is to make sure that people are really interacting with the locals,” says Nabongo. “In Cuba in particular, I have amazing guides and amazing vendors.”

Around 60 percent of the business is group trips, like a recent organized getaway to Colombia or a future trip to Senegal. The rest is planning private trips for clients, whether it be a honeymoon or milestone birthday.

She says,“96% of my clients say it is the best trip they’ve ever been on.” Describing her tours as a mix of of high-end restaurants and street food, she says that “everybody wants to land at a luxury hotel or Airbnb but they [also want to] interact with locals.”

“I’ve traveled now to 108 territories and countries,” says Nabongo. “I think because of that I have a competitive advantage. Quite frankly most travel agents don’t travel. They just sit behind a computer.”

In its second year of business, the agency now boasts over 100 clients. The business accounts for 85 percent of her income, which she supplements with UN consultancy contracts, sponsorships as an Instagram influencer and freelance travel writing gigs.

Managing a team that stretches from New York to Maryland to Capetown, South Africa, Nabongo says one of the most difficult aspects of entrepreneurship is putting together a good team. “I’ve cycled through lots of people in the past two years,” said Nabongo.

Regularly visiting far flung countries like Indonesia, Namibia or Qatar, Nabongo’s best tip for battling jet lag is to adjust to her destination’s timezone while on the plane. She eschews sleeping pills, instead relying on Dream Water, a drink that is available at many American airports, that has the natural sleep aid melatonin in it.

Pointing out that she was a digital nomad before the advent of the black travel movement, Nabongo says that she is “just a traveler who happens to be black.”  She hopes that as the movement’s momentum grows, black influencers can have a “seat at the table.”

“Black people have a history of building their own community. That’s what the black travel movement is,” explains Nabongo. “Mainstream doesn’t acknowledge us, mainstream doesn’t cater to us, so let’s build this ourselves.”

However, sometimes being a black solo female traveler can be “emotionally exhausting,” says Nabongo. On a recent flight through Amsterdam, she had a United States customs official ask for her permanent resident card after she had shown her passport. The official said that they couldn’t tell it was Nabongo. While she was living and working in Benin with her Italian boyfriend, she said many people just assumed that she was a prostitute.

As high-profile entrepreneur, Nabongo tries not to let these frustrations get her down as she is working towards a bigger goal, saying “I can use my voice to help others.”

It’s “hard as hell,” she says. But, Nabongo says, “I have to do this. I have to push through …I recognize it is bigger than me. All of this emotional trauma that I suffer is for a bigger cause.”

In order to build a brand on Instagram, try using crisp, clear images with engaging captions , says Nabongo. She also recommends to have a “thing.” For instance, she always dresses in bright colors, has a bright lip and is a traveler.

Although Instagram is a great source of business for the millennial – she says that around 95 percent of her clients find her through the site – she says that people often act like they “own you.”  From requests to give personal tours of a city to people asking her if she gets blood clots, there’s an invasiveness that comes with the social site.

One way that she stays safe is by never agreeing to meeting with someone in person unless they have a shared personal connection.

The work behind the full-time travel dream

But don’t be fooled into thinking Nabongo’s life is all a vacation.

“People want to be the quote unquote digital nomad,” says Nabongo. “You put your laptop down on the beach and say, “hashtag, today’s office’….that is not the reality. Traveling and working is extremely difficult.”