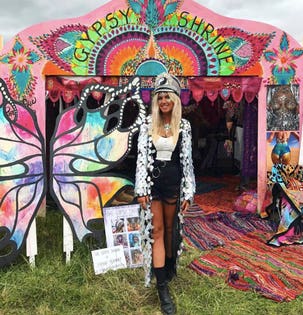 Born in 2016 out of festival culture, Shrine became a viral hit with thanks to its boob and booty glitter.

Founder Jenna Meek, who’s just 26, started out as a festival pop up , investing £3,000 ($3800) of her savings in her company, which is set to turnover £50 million in the next five years. She now works with celebrities such as Kylie Jenner and Ariana Grande, and companies from Google to ASOS.

“I can’t believe what it’s become,” says Meek. “Our mission is to be one of the world’s most disruptive and influential beauty and fashion brands on the market.

“Of course you either love it or hate it and we are not everyone’s cup of tea, but we are fun, disruptive and original.”

But Meek isn’t just focused on making people look pretty with her company’s body and face decor. She’s determined to ensure her products aren’t harmful to the environment.

“This year we’ve launched beauty products which are vegan and cruelty-free. And we’re about to launch a new hair colorant which we’ve been developing for two years. The concept is to reduce single use plastic. One glass bottle of our new product can save up to 30 plastic products.”

Meek is keeping mum about any more information but says the hope is to launch in the US in February, which is when it will be launched in the UK. “I’ll just say – watch this space,” she adds.

Glitter is notoriously bad for the environment, as most are made from plastic. When it’s washed down the drain, it contributes to the growing microplastics problem. One environmental anthropologist said all glitter should be banned because the PET it is usually made from can break down and release chemicals that disrupt human and animal hormones. In 2018, more than 60 music festivals banned glitter.

Meek prides herself on ensuring her company uses only biodegradable glitter is at events, and says Shrine’s product is the first of its kind to biodegrade in just 27 days in water.

“Alongside our biodegradable glitter, we developed another ‘world first’ product, with our peel off glitter glue. The concept behind this was that we didn’t want our glitter washing into the water systems, therefore we made a glue which allowed customers to stick the glitter to their body and when they were finished they would peel it off and dispose of it in the recycling.

“Ultimately this reduces the environmental impact – this is another of our bestsellers and another example of how we stay ahead.”

Meek’s company has already grown exponentially since its launch out of her bedroom in 2016, but she isn’t slowing up.

“I would love Shrine to carry on growing into a massive worldwide brand, I want all of our products to become celebrity favorites and for us to work with huge stylists.

“We have recently received some amazing request for our new clothing range, so we hope to build on this and keep developing exciting ranges.”

She also adds: “I want our products to spread happiness!! I want people to feel amazing wearing them!! I remember when I first started I received feedback from a lady saying she has never felt so amazing in her whole life as to what she did when she received a Shrine makeover. This feeling for me is 100% better than us hitting a sales target.”