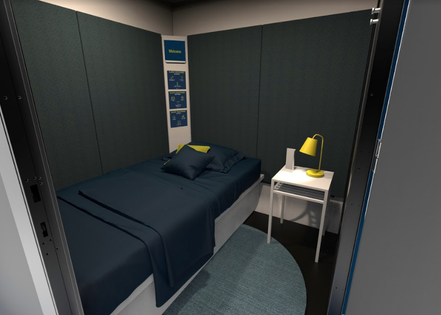 A Pop and Rest pod

After living in Paris and Bogotá, and then in London, friends Yoann Demont and Mauricio Villamizar realized something was missing: there was no place to recharge and unwind.

“We saw the same issues in all these cities: fast-paced, stressful and non-stop environments, long commutes to work and lack of private and peaceful spaces,” says Villamizar.

In 2018 the pair launched Pop and Rest, based in Silicon Roundabout in London.

“We connect people in large cities with private and peaceful sleep & meditation pods to disconnect them from busy places such as business districts, train stations and airports,” Villamizar, from Colombia, explains. “Our single-occupancy pods are booked by the hour and controlled from our app.”

The app can control music, lighting and sound, and the pods are booked out for £15 ($19) an hour.

Pop and Rest in Shoreditch

The pair hail from countries where having a siesta is the norm – and having a midday nap boosts mood, productivity and creativity. London is a sleep-deprived city, and so it seemed like “the perfect” city to launch the company.

Despite being trendy in cities like Tokyo, Pop and Rest is the first company in the UK to offer a sleep pod service – and the pair are keen to create a “network” of sleep pods, rather than just one location, like other companies in France and across Europe.

“La siesta is not a cultural thing in the UK, and so many people didn’t get our concept when we launched. We had to do a lot of education in regards to its benefits, and against the laziness perception it has.”

A Pop and Rest pod in a workspace

Another hurdle has been finding suitable spaces to set up the pods.

“Landlords can be very traditional in the way the take business into their buildings, but this is something that has been changing due to new generations taking over managerial positions,” Villamizar explains.

But despite some teething problems, the company has grand plans – and the founders envisage an Uber-style type of app, where anyone can be in a large city and find their nearest sleep pod.

“Regardless if it’s New York or Sao Paulo, once you get inside our sleep and meditation pods, the experience will be the same.

“Following our philosophy of affordability, convenience and high-quality sleep experience, we would like to be a 24-hour service, with sleep pods deployed in open and public spaces,” Villamizar says. “But for now, we are deploying them inside office buildings and retails businesses.”

“We have used it to test the market and create our new versions of sleep and meditation pods, based on our guest’s feedback,” Villamizar says.

Despite a lack of profit, so far, the pair’s vision drives them forward.

“We believe we are unlocking little oasis of peace in large cities,” Villamizar adds. “Most of our customers are new parents, they cannot sleep much during the night and they are always so happy to find us because usually in their workplace there is no such a space to take a nap. They are always super nice and grateful for our service, some of them taking even cabs to come to us once/twice a week at midday.

“That gives a lot of reason to expand our network of sleep pods.”