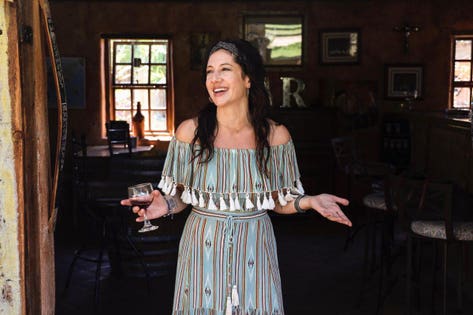 Rose Previte is a food-world darling, thanks to Compass Rose and Maydan, her acclaimed Washington D.C. restaurants that serve travel-inspired dishes that transport diners everywhere from the markets of Georgia (the country, not the state) to a Bedouin tent in the Sahara desert.

Previte’s story started in rural Ohio, where she was the only kid who didn’t bring PB&J sandwiches for her school lunch and whose locker always smelled like garlic, thanks to her food-loving Lebanese-Sicilian family. Previte loved to cook with her Detroit-born Lebanese mom, who ran a local catering business. And she sold Italian sausages at local Ohio food fairs with her New Jersey-born Sicilian father. “It was a corn-bred and homogenous place, and we were these weird stand-out kids who cooked all this weird food,” says Previte.

And yet, while food was a huge part of her life, it wasn’t her first choice for a career. While Previte was getting a master’s degree in public policy from George Mason University, she worked part-time as a bartender in D.C. to help pay her way through school and keep her afloat during her first full-time job at the nonprofit, Human Rights Watch. Working at that bar turned out to be a career- and life-changing opportunity: It’s where Previte met her husband, NPR correspondent David Greene, as well as her future business partner, Mike Schuster, who owned the bar.

When her husband got posted in Russia, Previte decided to join him, quitting her job and moving to a frigid country where she didn’t know the language and felt like a fish out of water. “Moscow didn’t quite agree with my Mediterranean-loving self,” says Previte. “The people were as cold as the weather.”

During the three years that they were stationed in Moscow, Previte traveled to over 30 countries, falling in love with street food stands and local food markets. It was on a train ride in Siberia that Previte came up with the idea of creating a restaurant that would take diners on a street-food journey around the world, all in the comfort of a cozy neighborhood spot. “Our favorite travel memories were always around street food,” says Previte. “It was something that we found in an alley, on a street or in a market where we got lost.”

Once she returned to D.C., Previte opened Compass Rose, fulfilling her dream of creating a restaurant that served the creations she had discovered during her travels, including the most popular dish: khachapuri, bread with cheese and egg that she first tasted in Georgia. “D.C. being as international as it is — it clicked right away,” says Previte. “Everyone is in the State Department, foreign service, former Peace Corps. It’s cool to hear them walk in and say, ‘I had that in Turkey, I had that in Israel.’ It’s all on the menu.”

Middle Eastern-inspired Maydan, where everything is cooked on a fire hearth, followed soon after. In 2018 Maydan was named one of America’s best new restaurants by Bon Appetit magazine.

Previte continues to travel regularly to destinations like Oman and Georgia, searching for inspiration to add to the menus at her restaurants. On a recent visit to New York City, we got the peripatetic Previte to open her little black book and share her 10 favorite street-food bites around the globe.

Shrimp Skewers in Muscat, Oman: Chris Morgan, our chef, and I went to Oman last summer. There’s an area by the airport known for street stalls and we were told to go there. It was vendor after vendor and a lot of them had the same thing: kofta kebabs, chicken. But the shrimp kebabs stuck out from all the other tastes — they had this fire to them. I didn’t know if the guy would give us the ingredients because he didn’t speak English and he also didn’t know why we cared so much about his kebabs. But we figured out that they’ve got saffron, tamarind, lime and local chilies. We have been able to recreate them in our restaurant.

Megruli Khachapuri in Tbilisi, Georgia: The first time David and I went to Tbilisi, it was November and a little bit cool. A lot of the street vendors sell khachapuri and it’s just amazing, with salty, sour cheese inside this beautiful warm bread. You could just pick one out of the window, hand them a few cents and walk on with it. That’s how we saw Tbilisi for the first time: walking and eating khachapuri.

Churchkhela (grape candy) in Georgia: This is a signature Georgian roadside food that is so memorable. You’ll find it as you drive on the highway into wine country from Tbilisi, which I’ve done seven times since my first trip. Older women line the road selling this candy that’s pretty phallic looking. It’s like grape juice around a walnut, so it’s sweet but it’s not overly sugary. It hardens and then you slice it. But it’s seasonal: I first found it in November, but I’ve gone back in summer and all I could find were tomatoes and cucumbers.

Patatas Bravas in Granada, Spain: This is a much more common one, but when I was thinking about what started my love of street food, it was actually my study abroad in Granada. I was a kid from Ohio and I’d never been on my own before. I fell in love with a guy named Carlos, and I took a siesta every day at three o’clock. On those beautiful fun nights out in Granada — one of the most fun cities in the world, in my opinion — everyone danced and drank on the streets late. Old, young, it doesn’t matter. They really taught me to love life. And the patatas bravas — many nights we would end up eating them on the way home out of a cup. To me, it symbolizes this love affair with travel and food, but also that first taste of freedom and traveling on my own. So there’s a lot tied into the patatas bravas, and they are on the Compass Rose menu right now.

Mariscos el Aguachile in Ensenada, Baja Mexico: Baja is one of the lesser known regions of the world for winemaking, but it’s starting to produce some cool wines. All the wineries are less than a mile from downtown Ensenada, right on the water. They’ve got these beautiful little wagons on the street where you can get a cup of the freshest, most amazing seafood. The shrimp was my favorite. Wineries by the water plus fresh seafood? That just brings me joy.

Moscow, where baked potatoes are the street food of choice.

Kartoshka (baked potato) Trucks in Moscow: I want to tell you there was something more exotic on the streets of Moscow, but when we were there for three years, there wasn’t. And there’s no fast food culture there either, no grab-and-go. Kartoshka is how you say “potato” in Russian, and these kartoshka trucks produce mountains of baked potatoes with your choice of toppings for $1. Sometimes we were in a hurry, and if we needed a quick bite, that culture just did not exist at all. So we would run by these potato carts, which were delicious and warm in the winter. The most common topping was fish, any manner of fish — but not fresh from Baja. I went the route of butter and salt. It was my saving grace on many cold days.

Tteok (rice cakes) in Seoul, Korea: Seoul, like most of Asia, has amazing street food, but if you haven’t had tteok before and you discover it for the first time, it’s an amazing discovery — a little spongy looking cake with a crazy spicy red sauce. It was one of my favorite things.

Purple Sweet Potatoes in Narita, Japan: David and I snooped around and realized the town of Narita, near the Tokyo airport, might be really charming, but we did not expect a street full of food. So we skipped the famous Naritasan Shinshoji Temple and had so much fun eating on the main road that leads to the temple. I already knew about Japanese purple sweet potatoes, but having them there was amazing. There was this huge stand and all they did was purple potatoes in every different form: mashed, baked, fried. It was another one of those times where the unexpected brings you so much joy. It wasn’t planned, and we ended up having the nicest day. Now, anyone that asks me, I’m like: “Go to Narita, do not stay in the airport, you must discover these things.” It symbolized everything I love about travel.

Balik Ekmek (fish sandwich) on the Banks of the Bosphorus in Istanbul, Turkey: David and I got engaged in Istanbul. We’ve been there since, but the first time was so amazing and we discovered these sandwiches, so I associate them with that lovely memory. The whole city is on the banks of the Bosphorus river and under one of the main bridges there are a ton of fisherman pulling fish out of the water, grilling and frying them and selling the sandwiches. One of my favorite memories is strolling the Bosphorus and getting these balik ekmek sandwiches right off the boats.

Camel Cooked on Hot Stones in Salalah, Oman: Salalah is down by the Yemeni border, and it’s cool and beautiful even in July. The food is amazing: Their tradition is cooking camel meat on hot stones. Instead of a grill filled with wood or charcoal, it’s filled with stones and heated from below. They cook the camel on top of the rocks. It’s delicious and unique.