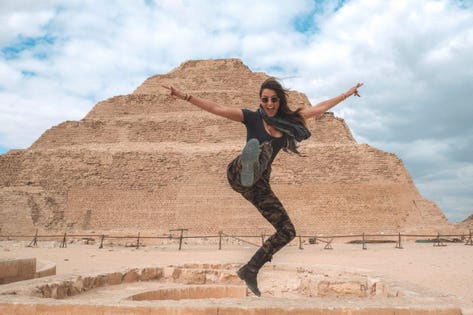 Serebral360° found a great read by Forbes – Entrepreneurs article, “This 21-Year-Old Woman Just Became The Youngest Person To Travel To Every Country.”

21-year-old Lexie Alford just became the youngest person to travel to every country on earth. Here she is, pictured in Egypt.

On May 31, 2019, a 21-year-old American woman named Lexie Alford stepped foot in North Korea and broke a record, becoming the youngest person in history to travel to every country on earth. In doing so, she beat out the 24-year-old current Guinness World Record holder and joined the historic ranks of other women like Cassie De Pecol, who at 27 became the first woman on record to visit every country, as well as the person to do it the fastest.

Traveling to each one of the world’s 196 sovereign nations is an achievement that Alford has been working on since she was a child — though she didn’t know it at the time. Alford grew up in a family that owns a travel agency in California. “Travel has been a part of my life since before I can remember,” says Alford, who describes herself as @LexieLimitless on Instagram. “My parents would take me out of school and place me on independent study for weeks and months at a time every year.”

READ MORE: “35 Countries Where Americans Are Most Likely To Get Kidnapped”

Alford in the UAE, where she also traveled with her parents as a child.

While she was growing up, Alford says that her family traveled everywhere from the floating villages of Cambodia to the Burj Khalifa in Dubai, from Ushuaia at the tip of Argentina to the Great Pyramids of Giza in Egypt. “My parents placed a lot of importance on exposing me to every way of life around the world and that had a very profound impact on the person I am today,” she says. “I’ve always had a curiosity about other people’s ways of life and how they find happiness.”

Alford said she originally wasn’t trying to break a record; she was just an intrepid traveler. “Honestly, in the beginning, I simply wanted to push the limits of what I thought I could do with my life and see as much of the world as possible in the process,” says Alford. “It wasn’t until things started getting really challenging that I realized I was inspiring people around me, especially young women. Feeling that support meant that I couldn’t give up when things got tough. I was determined to show everyone that the world isn’t as scary as the media portrays it to be and that there’s kindness everywhere.”

READ MORE: “Quit Your Job And Live In The Caribbean: 5 Cheapest Dream Islands”

Getting ready to copter over Palau.

In 2016, Alford got serious and started working on her mission to travel to every single one of the world’s 196 sovereign nations and break the Guinness World Record that has previously been held by James Asquith, who achieved his record-breaking moment in 2013 at the age of 24.

What sparked the idea? When she turned 18, Alford realized that she had traveled to 72 countries. ”The very first time I thought about breaking the world record was in October 2016 in my home, California,” says Alford. “I graduated from high school two years early and had gotten an associate’s degree from a local college. I was ready to start my gap year when I dropped the idea of going back to school and began to pursue the record full-time.”

Alford says that her travels are self-funded. She has done a few brand deals and campaigns along the way that helped fund her project, but she’s never had an official sponsorship. “I always knew I wanted to take time off to travel so I’ve been working every job I could find and saving since I was 12-years-old,” says Alford.

The amount she saved kept her going for the first year and a half of her travels. From there, she’s been working as a travel consultant in her family’s agency when she’s at home in Nevada City, California and also doing photography and blogging while she’s traveling. “I do a lot of research in advance to find the best deals, utilize points and miles for my flights, stay in cheap accommodation like hostels or create content for hotels in exchange for accommodation,” says Alford. “I’ve also made sure to keep my monthly overhead as low as possible by living at home with my parents, I don’t have a car payment or student debt and I don’t spend my money on unnecessary material possessions.”

On her Instagram feed, Alford often passes along advice about how to reconnect by disconnecting. “Some people find it strange, but I’ve actually never used a foreign SIM card,” she says. “If I need something, I’ll start talking to the people around me. I try to stay as present as possible when exploring these places because it’s such a privilege to get the opportunity to do so. I never want to miss a second of it.”

In Venezuela, a country that she says surprised her.

Alford says the highlight of her travels was going to unexpected — and often dangerous — countries. “The countries that have such a bad reputation that people don’t dare to go there are the places that spark my curiosity,” she says. “I experienced so much more kindness and natural beauty in places like Pakistan and Venezuela than I ever found in typical tourist destinations. Going somewhere with no expectations and being absolutely blown away by what you find there has been the most fulfilling part of this project.”

She struggled the most while traveling throughout West and Central Africa, due to tricky visas, little infrastructure for tourism, language barriers and the high cost of traveling safely. “There aren’t many flights, hotels or English-speaking guides so the operators have the market completely cornered,” she explains. “They can pretty much set any outrageous price they want because there aren’t many other options (besides maybe grueling and potentially dangerous bus rides). Traveling in this area of the world thickened my skin more than anything in my life ever has.”

Another extreme challenge was knocking the last country off her list: North Korea. After months and years of trying to get around the U.S. travel ban, she finally got the opportunity to go to North Korea in May, thanks to a loophole that allowed her to officially take a step into the country. According to Guinness World Record’s guidelines, visiting the North Korean side of the conference rooms in the legendary “blue house” in the Joint Security Area on the DMZ qualifies as a visit to North Korea. “I’m honestly very disappointed that I didn’t get to visit the country properly because of political issues,” she says. “But I’ll be visiting again as soon as the U.S. travel ban is lifted.”

Alford is still in the process of submitting nearly 10,000 individual pieces of evidence to Guinness World Record in chronological order, but the record clock stopped the day she entered country number 196. When she arrived in North Korea, she said she felt one thing: “Relief. I’ve been working through extreme anxiety for the past six-plus months overcoming the obstacles that go along with getting into some of the least accessible places in the world,” she says. “It wasn’t until the moment in that obscure conference room, of all places, that it really sunk in how far I’ve come.”

With some locals in Turkmenistan.

Some people criticized Cassie De Pecol — the fastest person to visit every country — for not experiencing each country deeply enough since she spent as few as two days in some places. While 21-year-old Alford is likely to get similar feedback for achieving her goal so quickly and young in life, she isn’t worried. “At the end of the day, we all prefer to travel in different ways,” says Alford. “Some people prefer to spend months or years in only a few countries and some want to have a sampler platter of the world. No matter what you prefer, there’s always going to be someone that disagrees.”

Alford says that she tried to spend as long as possible in most places. “I love getting far away from capital cities, trying local foods and photographing the culture and nature, and staying for as long as I can afford,” she says. But there were countries where Alford felt uncomfortable traveling alone as a woman. “To be honest, spending weeks in each country wasn’t in my budget. The least amount of time I spent in a country was two to three days. South Sudan, Somalia, CAR, Mali, Chad and Papua New Guinea are a few of the countries I didn’t spend much time in because I didn’t have the means for proper security. I would love to go back and explore more of them someday,” she says. “I still feel like I’ve only scratched the surface of how much there is to see.”

So what’s next? “I’m currently writing a book about my experiences in every country and the lessons I’ve learned along the way. I’m also going to start public speaking — my first TEDx talk is on June 15th. After finally completing this massive life goal, I’ll be taking the next few months to nourish my physical and mental health as I make plans for the future.”

• “Quit Your Job And Live In The Caribbean: 5 Cheapest Dream Islands”

• “35 Countries Where Americans Are Most Likely To Get Kidnapped”

• “Ranked: 10 Happiest And 10 Saddest Countries In The World”

• “Dream Job Alert! These Positions Will Pay You To Travel The World”