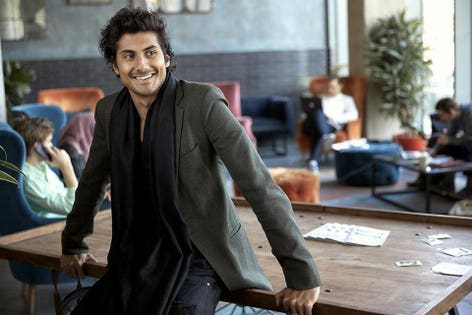 Reza Merchant believes that together, ordinary citizens can do extraordinary things. His startup The Collective is bringing our fragmented society back together with engaging, new housing solutions. And with nearly $1 billion raised on its mission to expand around the globe, he has undergone an immense learning process.

Reza recently appeared on as a guest on the DealMakers podcast. During his exclusive interview, he shared his journey as an entrepreneur, what drove him to bring new meaning to how we live, the fundraising process, and the huge leaps he has made to bring his dream to life.

Reza’s parents immigrated to London, where he was born and raised. He grew up in a household with that indescribable immigrant spirit we see in so many hyper-successful entrepreneurs.

His father was an entrepreneur himself, who worked incredibly hard to provide a good life. It shaped Reza from a young age to see that hard work, the early mornings, late nights and risks his father took to provide.

Reza learned that there are no shortcuts. Hard work and relentless dedication through all the ups and downs of starting a company is critical because as an entrepreneur, the world doesn’t wait for you. “No matter what may get in the way of your best-laid plans,” he says, “you’ve got to keep on going and keep on persisting.”

While at the London School of Economics (LSE), Reza took the summer off to travel to Thailand for three weeks, an experience which really woke him up. Reza says, “I always encourage anyone at a crossroads to go traveling on their own to really understand what’s going to make them tick in the next phase of their journey.”

He returned, realizing he wanted to do something that would challenge him, fulfill him, and enable him and others to experience life and the world for all it has to offer. He sensed there was so much more fulfillment to be unlocked outside the typical world of work.

Reza watched most of his colleagues from LSE go either into banking or consulting.

Frustrated by the lack of high-quality and affordable accommodation for himself and his fellow students, he and a couple of friends decided to create a superior product in the market.

They had experienced first hand the challenge of finding a place to live — the soaring rents, broker fees, credit checks, furniture costs, and utility bills, which made all the joys of living costly, arduous, archaic and unfriendly.

Inspired by his trip to Thailand, Reza began to envision a world where people are given the opportunity to better themselves, and in turn the world around them. “How lonely most people are made by today’s cities“ he thought. He then started to thinkg of a way to change that.

21 years old at the time, they started with no real business experience. They took $2,000 in overdraft from the bank and set up their own real estate brokerage to improve the experiences they had been subject to in the past.

They began on a small scale in May 2011. A year later, they were offering their own four to six bedroom houses, adding nice furniture, nice artwork, and renting by the room for an all-inclusive package.

Within days, they’d have whole houses fully leased up to good people. That summer they took on about 20 houses in the same way. Then they moved up to 20 to 50-unit projects, all in the space of a few months.

Quickly, Reza realized the real opportunity lay in lack of supply and excessive demand in the market. And so began his journey to a purpose-built product.

At the end of 2011, a deal was signed on a derelict hostel in Camden, London. The roof was hanging off. There had been a fire there five years before. No one had touched it. It was a huge jump from what they had been doing.

They had a vision. Reza took a loan against his family home at 18% to make that happen. In 2012, they finished that 50-unit project and entered a new chapter as The Collective.

Some projections estimate that by 2050, 70% of the world’s population will be living in cities. Yet, for all the benefits of urbanization and technology, many people are feeling even more isolated than ever.

Today, The Collective’s mission is to build and activate spaces that foster human connection and enable people to live more fulfilling lives.

Reza and his global team of 200 people are driving the creation of a global network of locations that give people the freedom they crave to experience, work, travel and live on their own terms.

Through reimagined space that couples culture-forward programming with one-of-a-kind communal amenities, The Collective’s locations offer an attainable and unprecedented solution to city living.

Since 2013, The Collective has functioned as a vertically-integrated company, dedicated and accountable to each stage of the development process – from acquisition to planning, design, build and operations.

In the last 12 months, The Collective has set up offices in Berlin and New York and acquired five new properties across New York, Chicago, and Miami.

With their second and third operational locations launching in London and New York this late Summer, the company is approaching 9,000 units up and running or under development.

To date, they’ve raised $850 million to fund their global vision and create a paradigm shift in the real estate landscape that enables us to live more affordable, more flexible, and more together.

The Collective was able to master storytelling to raise such financing. This is capturing the essence of the business in 15 to 20 slides. For a winning deck, take a look at the pitch deck template created by Peter Thiel (see it here) that I recently covered. Thiel was the first angel investor in Facebook with a $500K check that turned into more than $1 billion in cash.

Listen in to the full podcast or check out the transcript to learn more about: