Serebral360° found a great read by Forbes – Entrepreneurs article, “This Entrepreneur Went From Investing $100 Million In Startups To Raising $500 Million For His Own Business.” 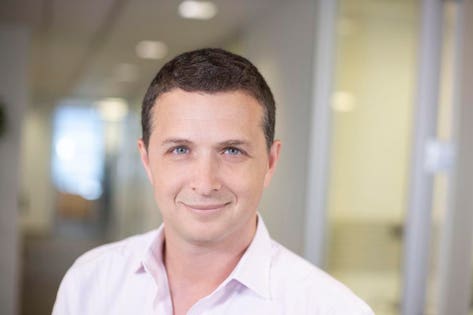 Eyal Lifshitz has gone from watching his own father take on the rewards and challenges of being a business owner, to working for one of the most respected VC firms where he invested millions of dollars in startups, to founding his own company BlueVine that recently reached a milestone of $2 billion in dollars funded to small business owners in just six years.

I recently had the opportunity to interview Eyal Lifshitz in an exclusive appearance on the Dealmakers podcast. During his interview, Eyal shared his journey as an entrepreneur, how he was able to grow BlueVine, the patterns behind highly successful companies, and many more topics.

Becoming a Jack of all Trades

Eyal Lifshitz didn’t take the direct route to become a startup entrepreneur. Through his robust varied experiences, he has been well- equipped to create a business and compelling product for other business owners, inspire and motivate his team, and raise capital to grow his business.

He gained an understanding of business from his family. Eyal’s father and grandfather were both business owners. They had developed their own businesses, and ran them for decades.

He still remembers his father being the boss of a small company, with five or six employees. Eyal saw the attractiveness of it, and the enjoyment of that freedom to really be the owner. Of course, at the same time, there were moments when he was more stressed due to issues with cash flow and employees. It gave Eyal a real appreciation for the rewards of running a small business, but also insight to the challenges.

Along with learnings from his family, he gained a strong work ethic at an early age. Eyal was born in New York City but found himself in Israel at 13-years-old. That meant mandatory military service. An experience which taught him a lot about teamwork and endurance.

It wasn’t until he was coming out of the military in 2000 at just 21-years-old that Lifshitz bought his first computer and started to become interested in tech and coding. This then prompted him to study electrical engineering, which ultimately gave him an edge in his entrepreneurial career.

The Insider Route to Becoming a Funded Entrepreneur

Before starting BlueVine, Lifshitz worked for both one of the best knowing consulting firms and most respected venture capital firms.

He started out working for McKinsey, a prestigious consulting firm. McKinsey was the perfect training ground for honing his ability to think and solve complex strategic problems – the kind that were on the minds of Fortune 500 CEOs and senior executives. He was also able to develop broader business skills through work with many types of companies in various industries.

From there, Eyal competed among hundreds of applicants for a position at Greylock IL  – a top tier Venture Capital firm. Eyal’s time at Greylock gave him the unique opportunity to see a lot of potential investments in different industries, in different stages, and engage with smart entrepreneurs who were doing very exciting things.

This experience as an investor taught him the ins and outs of fundraising and exposed him to the world of fintech that would soon inspire his career as an entrepreneur.

During our conversation, I took the time to pick Eyal’s brain on fundraising best practices given his expertise.

From his experience reviewing investment opportunities, working on due diligence and negotiating term sheets, Eyal’s top three tips for entrepreneurs looking for funding are:

Fundraising requires upfront preparation. You want to come at it with your best foot forward. That means putting together the story that best reflects your company. This preparation changes from financing round to financing round, but you can’t skimp on it.

In fundraising storytelling is everything. That is being able to capture the essence of the business in 15 to 20 slides. For a winning deck, take a look at the pitch deck template created by Peter Thiel (see it here) that I recently covered. Thiel was the first angel investor in Facebook with a $500K check that turned into more than $1 billion in cash.

You don’t want to fundraise with your back against the wall. Entrepreneurs in fast-growing companies typically burn a lot of cash. That’s why they need to raise capital, but you don’t want to be in a position where you’re really close to the end and frantic. Give yourself enough time.

The later the stage, the more time you want. A good rule of thumb is at least around six months.

There’s a little bit of a dating game in finding an investor. The fact that you have a really great company doesn’t mean it’s going to be right for every investor. You’re also in a position to turn down investors. Don’t jump on the first deal just because, especially if they don’t have the same vision as you.

This leads to a matter of  fit. While investors want to meet entrepreneurs, it can be very tedious and a long process if you go super wide as an entrepreneur and try to meet every single investor out there.

And while fundraising is important, you as an entrepreneur and CEO also have to run the company. To maximize your time, make the process as efficient as you can. Part of that is being selective and thoughtful about the investors you want to meet.

What Do Investors Want?

Great companies often receive multiple offers from investors, but what are investors really looking for?

Eyal says the main factors include:

Eyal says, “The investor is making an explicit bet here that the entrepreneurs, the founders will be able to figure it out even if there are going to be bumps in the road, and they’ll be able to execute on that vision.”

From his experience Eyal says common traits he sees in these successful entrepreneurs include:

One of the areas Lifshitz was interested in at Greylock was financial services. He believed that traditional financial services was antiquated and could be delivered fully online for a faster, better experience for small business owners. In 2013, that vision became BlueVine.

Flash forward six years, BlueVine provides fast business funding up to $5 million through three products -term loans, lines of credit and invoice factoring in a simple online platform. Business owners can apply in minutes and get approved for financing significantly faster than traditional banks with some owners receiving approvals in as fast as 5 minutes.

To date, BlueVine has provided access to over $2 billion in financing to more than 15,000 small businesses nationally.

The company has raised $140 million in equity capital and over $400 million in debt financing. Its investors include the likes of M12 (Microsoft), Citi Ventures, Menlo Ventures, and Lightspeed Venture Partners – to name a few.

Listen in to the full podcast to find out this founder‘s take on: